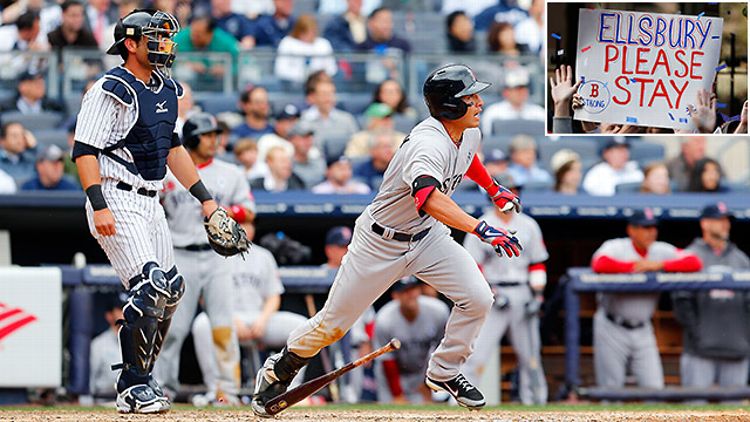 Who needs the winter meetings? Apparently not Major League Baseball’s general managers, who, while evidently hopped up on krokodil, executed a flurry of trades and free-agent deals a week before the sport’s offseason confab at Disney World. The 48-hour swirl of signings and swaps saw Jacoby Ellsbury commit the ultimate heel turn, the Nationals further solidify their starting rotation, and the A’s begin filming their audition tape for Hoarders: Bullpen Strong. Tuesday’s action was largely a series of middling moves and “my garbage for your trash” trades, but taken cumulatively, the effect was, well, startling.

As with any period of great upheaval, the stunned citizenry must have questions. Let’s try to answer five of them, starting with the big one.

1. Isn’t That a Long Time and a Lot of Money for Jacoby Ellsbury?

Ellsbury has pulled a Reverse Tiant, leaving the Red Sox for the Yankees and thereby giving this deal an extra dash of vinegar. While the contract terms, which would make Ellsbury the third-richest outfielder in MLB history, caused quite a stir, the reported seven-year, $153 million deal actually isn’t outrageous for the second-best position player on the market.

That may sound crazy, but we need to rethink the way we value free agents. MLB teams have never had more money. Plus, thanks to spending limits on amateur players and the recent trend of teams locking up their own stars before free agency — resulting in guys like David Wright, Joey Votto, Cole Hamels, and Evan Longoria likely never reaching the open market in their primes — baseball has never seen more of a seller’s market.

This certainly isn’t a flawless acquisition. Ellsbury, Brett Gardner, and Ichiro would give the Yankees a speedy but disconcertingly small outfield. And Ellsbury has a checkered injury history; he could fall down the stairs tomorrow and jeopardize his season. But this contract doesn’t exist in a vacuum; it’s the first domino. Paying Ellsbury $22 million in 2014 means that two of the following statements can be true, but not all three:

1. The Yankees stay under the luxury tax threshold.

2. Alex Rodriguez’s appeal is at least partially successful. The Yankees seem to be penciling Ellsbury into A-Rod’s spot in their salary structure. If Rodriguez gets his suspension reduced to 50 games, leaving the Yankees on the hook for $17.1 million more than they’d anticipated, the Steinbrenner brothers could be searching for change in the couch cushions on their private jet. (If this happens, by the way, I’m going to laugh like a lunatic for the duration of the suspension.)

3. The Yankees re-sign Robinson Cano. Brian Cashman has been playing hardball with his free-agent second baseman, but Cano is a far more valuable commodity than Ellsbury, and given how the market is unfolding, a $200 million contract for Cano is pretty much a lock. Reports surfaced Tuesday indicating the Mariners have emerged as a serious contender for Cano, but with Ellsbury spoken for, we might also see the Orioles or Nationals get a little more aggressive. That’s when things could get totally crazy.

2. Did the Tigers Just Give Away Doug Fister for Free?

I love trades like Kinsler-for-Fielder. Swapping an established star for prospects is just so mundane, but a one-for-one exchange of established contributors in similar career phases is both rare and a compelling statement of confidence from the involved GMs. With that trade, Tigers GM Dave Dombrowski rectified one of his team’s great weaknesses: its surplus of designated hitters. By replacing Fielder with Kinsler, Dombrowski saved money, added a five-win second baseman, and allowed Miguel Cabrera to move back across the diamond.

That deal made way more sense than what Dombrowski did this week, when he traded Doug Fister to Washington for utility man Steve Lombardozzi and pitchers Robbie Ray and Ian Krol, who are best known for hosting a cooking show and playing a boorish lawyer on The League, respectively.

In two and a half seasons with Detroit, Fister posted a 128 ERA+ and a K/BB ratio of more than 4-to-1. That means the Nats got a no. 2– or 3–quality starter for a utility guy, a middle reliever, and an OK pitching prospect. All three players Washington gave up are useful, but it’s not the kind of return a team should net for a pitcher like Fister, who now slides into the same spot behind Stephen Strasburg, Jordan Zimmermann, and Gio Gonzalez that he inhabited behind Justin Verlander, Max Scherzer, and Anibal Sanchez in Detroit. Suddenly, Washington is the team with the indomitable starting rotation, which is an even bigger plus for the Nats than Fister’s ability to serve as Jayson Werth’s body double.

The angle for Detroit is less obvious. While the Tigers needed to open a spot for Drew Smyly in the rotation, it’s hard to accept that they got full asking for Fister. And if this was a salary dump, why did Dombrowski turn around the next day and negotiate a deal that would pay Joe Nathan more than Fister was likely to make? Even at age 39, Nathan should be the kind of knockout closer the Tigers haven’t boasted in years. And that means a lot for a GM who, when tasked with finding bullpen depth, is as likely to return with a bathyscaphe as a reliable arm. But while Nathan’s signing makes sense in a vacuum, making room for the closer by moving Fister for 40 cents on the dollar simply doesn’t.

3. What Use Is Dexter Fowler to the Astros?

Dexter Fowler for Jordan Lyles and Brandon Barnes is a trade you can talk yourself into and out of from either side. Is Lyles a pitcher with a career 5.35 ERA who’s about to get dropped into Coors Field? Or is he a 23-year-old former top-50 prospect who could thrive after a change of scenery? Either way, it’s hard to feel confident in what Colorado is doing. The Rockies won 74 games last year, and the front office can’t possibly think giving Justin Morneau a multiyear contract will allow them to jump the Padres, Diamondbacks, Dodgers, and Giants to make the playoffs. That wouldn’t happen even if Lyles turned into Tom Seaver.

Fowler has long been one of my favorite players, but more because of aesthetics than production. He’s one of the fastest players in the game, and he’s posted double-digit walk rates and home run totals in each of the past two seasons. The thing about Fowler is that his speed, prodigious though it is, doesn’t really play the way you’d expect it to. In five full seasons, he’s stolen only 83 bases, and even then his success rate (67 percent) is below the break-even mark. Both UZR and Total Zone grade Fowler out as a below-average center fielder. And despite his .365 career OBP, Fowler strikes out more often than Domonic Brown, Yoenis Cespedes, or Alfonso Soriano.

Plus, while everyone loves the Astros’ front office and farm system, Fowler’s going to be a free agent in two years. Mark Appel might be ready by then, but Carlos Correa won’t be, and neither will the no. 1 overall pick in this year’s draft, particularly if it isn’t NC State lefty Carlos Rodon.

It’ll be interesting to see what Houston does with Fowler. The Astros could try to fix his contact and baserunning issues, then either extend his contract beyond 2015 or flip him for still more players when the opportunity arises. If the Astros simply wanted a center fielder with speed, power, and serious contact issues, they’ve already got George Springer.

4. How Rapidly Are the Marlins Rising From the Ashes?

More quickly than you realize. Miami signed catcher Jarrod Saltalamacchia to a three-year, $21 million contract, the third-richest given to a catcher this offseason. Let’s talk about that for a second: Brian McCann got five years for $85 million from the Yankees, who paid for quality. The Phillies gave Carlos Ruiz three years for $26 million. Now, Saltalamacchia doesn’t have as good of a track record as Ruiz, let alone McCann, but he’s five and a half years younger than Ruiz, which might be, you know, relevant considering the position they play. Little things like this are going to help the Marlins pass the Phillies and Mets, and soon.

The Marlins already have one of the best pitchers in the NL in Jose Fernandez. They also have Nathan Eovaldi, Jacob Turner, and Henderson Alvarez, who are all 24 or younger and were all league-average or better last season. On offense, the Marlins boast Christian Yelich, Marcell Ozuna, and Jake Marisnick, to say nothing of the Mighty Giancarlo Stanton. Catcher was one of Miami’s big holes, and now it isn’t. That’s one more spot in the lineup filled, and one step closer to contending again before the next fire sale.

5. What Happened to Moneyball?

Those of you who watched the movie a couple years back (the one where Brad Pitt spat into a cup for two hours) might be a little flummoxed by Billy Beane’s activity over the past couple days. A quick recap:

• First, Beane traded for Baltimore’s Jim Johnson, a reliever who’s going to make eight figures next season because of how many saves he has.

• Then, Beane flipped one of his top prospects for Craig Gentry, a 30-year-old with a career .366 slugging percentage, and another relief pitcher, Josh Lindblom, who shocked the world when he avoided surrendering a home run on every pitch he threw as a Ranger.

• Beane swapped a hitter with a career 109 OPS+ for Luke Gregerson, another relief pitcher.

• Oh, and Beane signed Scott Kazmir to a two-year contract along the way. This is the same Kazmir who posted a below-average ERA in 158 innings last year and hasn’t even been close to effective since 2008.

All four of those moves seem antithetical to what we’ve come to expect from Beane. Or at least they seem that way. But look at how little the A’s gave up. Michael Choice and Seth Smith, the players who brought back Gentry and Gregerson, are both first base/corner outfield/DH types, of which the A’s have more than they can use. Josh Reddick and Cespedes have the outfield corners pretty well nailed down, and first baseman Brandon Moss hit 30 home runs last year. That left Choice and Smith to share the DH spot with Nate Freiman and John Jaso. Take into account that Smith will be a free agent after next season, and it’s clear that he and Choice were worth more to new teams than they would have been to the A’s.

Gentry, by the way, is a superb defensive center fielder who posted a .373 OBP with 24 stolen bases last year. So he’s more than your typical Punch-and-Judy hitter. Johnson (obtained at the cost of Jemile Weeks, who’s as close to useless as a pro player can be while still having use of all four limbs) and Gregerson give Oakland one of the best bullpens in the game.

Kazmir’s contract brings us full circle: Free agents are expensive these days. Kazmir shouldn’t cost $11 million unless the A’s have to bribe the local bureaucrats to make sure the paperwork goes through, but he does, because that’s simply how much starting pitching costs nowadays. Free-market economics can be stupid sometimes.

Now baseball’s general managers are free to spend the winter meetings drinking margaritas and getting their pictures taken with Mickey Mouse. At the risk of tempting fate, it’s safe to assume that the most eventful day of the offseason is behind us.

I Bought Brooklyn Nets Season Tickets in the Summer ... I've Made a Huge Mistake