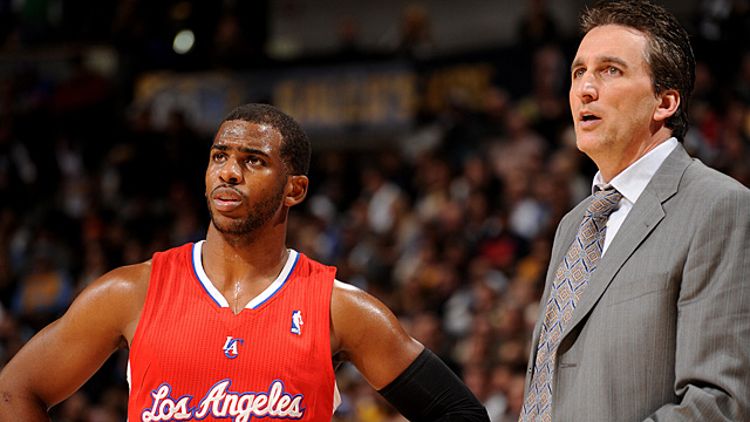 Mays and I did this with the NFL, and I managed to spoil Cabin in the Woods and wrongly assert that Michael Vick would play all 16 games for the Eagles. We’re blinding you with science over here. Same rules as before: I say something, Mays argues whether it’s plausible or implausible. Let’s get weird.

If the first half of the season belonged to Kyrie Irving, the second half will belong to John Wall.

Chris Ryan: Upon his return from a summer knee injury, John Wall was subject to speculation and scorn. People made fun of his weight and questioned whether he was a franchise player. While Kyrie Irving, another point guard and more recent no. 1 overall draft pick, has had a coronation of a season, picking up plaudits wherever he’s played, Wall was been largely forgotten or dismissed.

Do so at your peril, sheeple. Since his return the Wizards are basically a .500 team — 10-9 in his 19 games played, and 5-5 in their last 10. Wall is averaging 14 points and seven assists per game, with a PER above 17. And he still moves like Usain Bolt after two boxes of white cheddar Annie’s mac and cheese. Which is pretty damn fast. The Wizards start the second half of the season with seven out of eight games at home, and have a mid-March cupcake run of New Orleans, Phoenix, Charlotte, and Phoenix. They’ve established a reliable, if dull, interior of Emeka Okafor and Nene, are getting Bradley Beal on his second lap around the league, and have the Eastern European white ninja dunk god Jan Vesley waiting for his moment to leap off the bench and into NBA history. And it will all be orchestrated by Wall. No, he cannot shoot, but he might just make the Wizards into a winner (I don’t mean they’ll have a winning record, I just mean they will win some games). And if he does, we’ll be talking about him along with the other point guards capable of transforming the fortunes of their franchises.

Robert Mays: I gotta say, I’m with Stan Van Gundy here, and have been for a while. What will separate Wall’s second half from Kyrie’s first half is the same thing that will separate them for their entire careers — Kyrie is the hypothetical best player on a championship team; Wall is not. That PER Wall’s sporting is nice, until you look at Irving’s 22.3. He’s scoring 23.5 points a game with a True Shooting percentage around 57. Wall’s is less than 50.

There’s no denying Wall’s status as an elite athlete whose quickness is going to allow him to get to the rim and whose length is going to annoy opposing point guards. The problem is that he’s never going to be an elite scorer, and as a result his impact on the game is always going to be limited. I have no doubt that the Wizards will win more games — by a healthy margin — with Wall back in the lineup, but you can only win so many when the ultimate destiny of your “franchise player” is to be a second fiddle.

One of the Los Angeles teams will implode, and not the one you think.

Ryan: I’m about to sound like Nicolas Cage in Wicker Man right now, but come on, doesn’t the entire Clippers season hinge on Chris Paul’s kneecap? Here’s a worst-case scenario: The Clippers don’t pull off any kind of deadline deal, but do allow Bledsoe-and-Jordan-for-Garnett rumors to get just loud enough that it unsettles the two aforementioned players. Some injuries start to afflict the team: Maybe they lose Grant Hill, or the recently returned Chauncey Billups, or one of their essential hustlers like Willie Green or Matt Barnes — something to upset the balance of the sqaud. Maybe Jamal Crawford goes a little cold. Or maybe, and this is the biggest thing to consider, maybe games start getting a little tighter and Vinny Del Negro is forced to actually coach out his lame-duck season. The Clippers are 1-5 when down three points with 30 seconds remaining. Vinny!

Mays: I’m not willing to even consider this right now, mostly because the spell Chris Paul has me under is stronger than ever. I was pretty worried when the kneecap situation started to feel like something more, but after that short pre-break run and his All-Star Game performance, he seems pretty healthy to me.

It does feel like every dude on this team has spontaneously combusting joints, but I’d contend that no team in the league is more set up to deal with injuries than the Clips. Considering the team I root for played seven guys in a game this month (and one of them was Vlad Radmanovic), it’s hard not to see this team’s bench situation as anything less than ideal. Even if they deal Bledsoe (which I support, mostly because I’ve warmed up to the idea of Paul Millsap in the past few hours) I still think they have enough backcourt depth to be OK moving forward. And as for that late-game stuff, Chris Paul is on this team. I’m confident those issues will even out.

If Josh Smith goes to the Spurs, the Spurs will win the NBA Finals.

Ryan: A few weeks ago, Ethan Strauss from Bleacher Report sent out this tweet: “Few fans want Josh Smith, but how scared would you be if the Spurs got him?” It’s stuck with me ever since. Today, on ESPN Insider, Tom Haberstroh has a post proposing a Smitty to Pop Antonio for Tiago Splitter, Stephen Jackson, Boris Diaw, and a future first-round pick. That would leave San Antonio without a real center, but they could run out Tony Parker, Manu Ginobilli, Kawhi Leonard, Smitty, and Duncan. They’d be thin off the bench, with really only Matt Bonner and Gary Neal as viable options … BUT THEY’D START TONY, MANU, KAWHI, SMITTY, AND DUNCAN.

Mays: My feelings about the Spurs are similar to my feelings about the Patriots. As I’ve progressed from adolescence to (sort-of) adulthood, and both my ire and affinity for raging against the machine have lessened, my feelings about sports’ most ruthlessly efficient franchises have transformed from revulsion to fascination. How the Spurs have managed to do what they’re doing with this roster is beyond me, and before they got hit by the Kevin Durant–James Harden train last June, their playoff run was one of the cooler sports happenings I can remember.

Keeping all that in mind, I LOVE THIS. There are few athletes ever who infuriate me the way Josh Smith does, and it’s for precisely that reason that I need to see what he does when inserted into this situation. As Zach Lowe noted today, the Duncan-Splitter pairing has been great this season, but just imagine that starting five you listed! Who’s scoring on that team? Who’s stopping that team? OK, still the Thunder, probably, but I think it’s a much tougher proposition. Let’s make this happen.