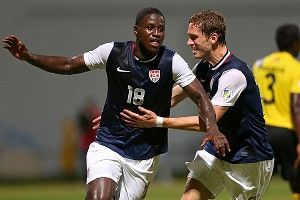 Eddie Johnson’s first goal for the United States Men’s National Team came in the forward’s first start on October 10, 2004. Johnson, then 20 years old, netted three more three days later against Panama and finished 2006 World Cup qualifying with seven goals in six games. The Florida-born Johnson was strong, fast, and talented, exactly what the future of U.S. soccer was supposed to look like.

Then, perhaps inevitably, he began to struggle. A combination of injuries, believing the hype, and bad luck plagued Johnson, who played for five clubs between 2006 and 2011. There were occasional highs — a goal for the U.S. against Barbados in 2008, a strong if brief run with Cardiff City in 2009 — but mostly lows. He continued to make money to play soccer, which is not a bad life, but that incredible promise was slipping away. When a deal to play for Puebla in the Mexican League fell apart last winter because Johnson was out of shape, the subsequent conversation didn’t revolve around when we would see the forward in the Stars and Stripes again, it focused on whether he would continue to play professionally at all.

Which bring us to a drenched cricket field in North Sound, Antigua, where Johnson found himself in the starting lineup — at left-midfield, no less — for a crucial World Cup qualifier on Friday night. Jurgen Klinsmann’s team needed four points from two games to reach the final round of CONCACAF 2014 World Cup qualifying. Johnson, despite a recent rejuvenation with the Seattle Sounders, was a surprising choice to make the roster, much less start against Antigua and Barbuda. But Klinsmann, who controversially left Dutch league leading scorer Jozy Altidore and MLS leading scorer Chris Wondolowski off the roster for the U.S.’s two matches, put his faith in Johnson. In the 20th minute of the match, the now-28-year-old talent repaid that belief. He rose over an A&B defender to head home Graham Zusi’s left-footed cross. Johnson was back and Klinsmann — subject to increasing second-guessing — was a genius.

The U.S. conceded five minutes later when Peter Byers beat defender Geoff Cameron, then crossed to Dexter Blackstock, who tapped the ball into the net. It was the first goal A&B scored at Sir Vivian Richards Stadium during the semifinal round, and yet another example of the tendency Klinsmann’s team has to let off after scoring.

The home side, inspired by the goal and a 10,000-person crowd, one-ninth of the tiny nation, was in the match. Perhaps this shouldn’t have been surprising since A&B proved frisky in the last fixture between the two teams, but it certainly wasn’t the script the American coach wrote. The U.S. continued to dominate time on the ball — they would end the match with 76 percent of the possession and complete almost five times as many passes — but managed to create only a single shot on goal in the run of play. For much of the match, the CONCACAF minnows looked like they had a better chance of scoring.

Part of the issue was the quality of the field, which was more slop fest and less playing surface. It was a mud pit, especially after the sky opened up in the second half. And, at 70 yards by 110 yards, the field was as small as FIFA will allow for a regulation game. (In general, a smaller field benefits the underdog because it squeezes players together.) But it’s not like CONCACAF teams haven’t done this before. Every time the U.S. plays away from home, the field is of variable quality. Plus, you know what happens during October evenings in the tropics? It pours. And yet the U.S. team continues to be surprised by these adverse conditions. (Clint Dempsey, who was borderline invisible on Friday night, tweeted an image of the field in disgust.) The sooner the Americans realize that despite superior talent they will struggle to pass around teams if every third pass hits a clump of dirt and bounces in a strange direction, the better. Not even Spain could look good on that cricket oval.

To his credit, Klinsmann’s roster choices reflected a reality of qualifying in CONCACAF that he is slowly coming to understand: It doesn’t have to be pretty; it does have to be successful. Johnson and super-surprise call Alan Gordon found their way into the American camp because of their ability to be target men: to receive a long ball, hold it up, and lay it off to a teammate. In press conferences leading up to Friday’s match, the coach talked of taking “Route One” to attack, basically using the U.S.’s size and athleticism to play more directly. You go through rather than around. It produces ugly soccer — light-years away from the tactical revolution Klinsmann promised, and has so far failed, to bring to the Red, White, and Blue — but it can be effective and, when playing away games within CONCACAF, necessary. Bob Bradley figured this out, shocking everyone by starting big, old, and slow Conor Casey against Honduras in San Pedro Sula in a crucial qualifier in 2009. The forward responded with two goals, helping the Americans clinch their spot in the 2010 World Cup.

Klinsmann also needed a result. He relied on future star turned afterthought Johnson, who responded not once but twice. In the dying stage of a 1-1 game, second-half substitute Sacha Kljestan passed to second-half substitute Gordon, who hit a onetime cross. Johnson rose again, got his head to the ball, and nodded it past A&B goalkeeper Molvin James. The strike, Johnson’s 10th in World Cup qualifying, ties him with Brian McBride for second place all-time, two goals behind Landon Donovan. Suddenly, a Stars and Stripes performance that fluctuated between tired, angry, and lackadaisical was forgiven (if not forgotten). They came for three points. They got three points.

The United States national team travels to Kansas City needing only a draw against Guatemala on Tuesday. It could be an unattractive affair, as the Chapines will also advance with a point, but the field will be pristine, the crowd supportive, and the weather perfect. The time for excuses is over. But so is the time for the beautiful game. There is reaching the next round, and there is everything else that comes afterward. Klinsmann, it seems, learned this lesson just in time.