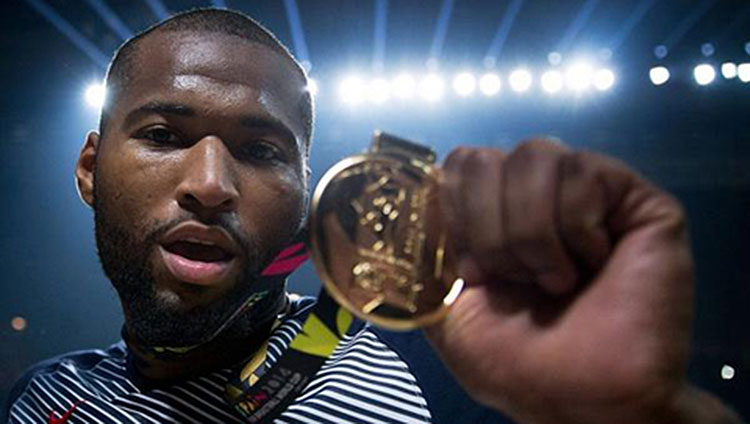 Remember when Team USA was supposed to struggle? Remember the shooting we didn’t have, and the motion offenses we couldn’t handle? Remember Goran Dragic and everybody else saying Spain was the best team in the tournament?

“I’ve been trying to hold my tongue for this one,” Faried told reporters before the title game. “I felt as though we came out and did our job, and y’all kept saying, ‘Oh, you’re not going to beat Spain.’ Spain couldn’t even beat France.”

“When Spain can meet us at the championship game, then come talk to me.”

“I wasn’t surprised at all (about the Spain loss). There was too much hype around them. It was arrogant, borderline disrespectful to us, saying they’re better than us, we’re not going to be able to match up with their bigs and all this other arrogant stuff. I just took it as, ‘okay, alright. Once we meet them in the finals we’ll see what happens.’ We can’t even see what happens.”

We tried. We showed up Sunday.

We were ready for the showdown.

But where was Pau? Where was Marc? Where was Juan Carlos Navarro and the breathtaking passing that would tear us apart? 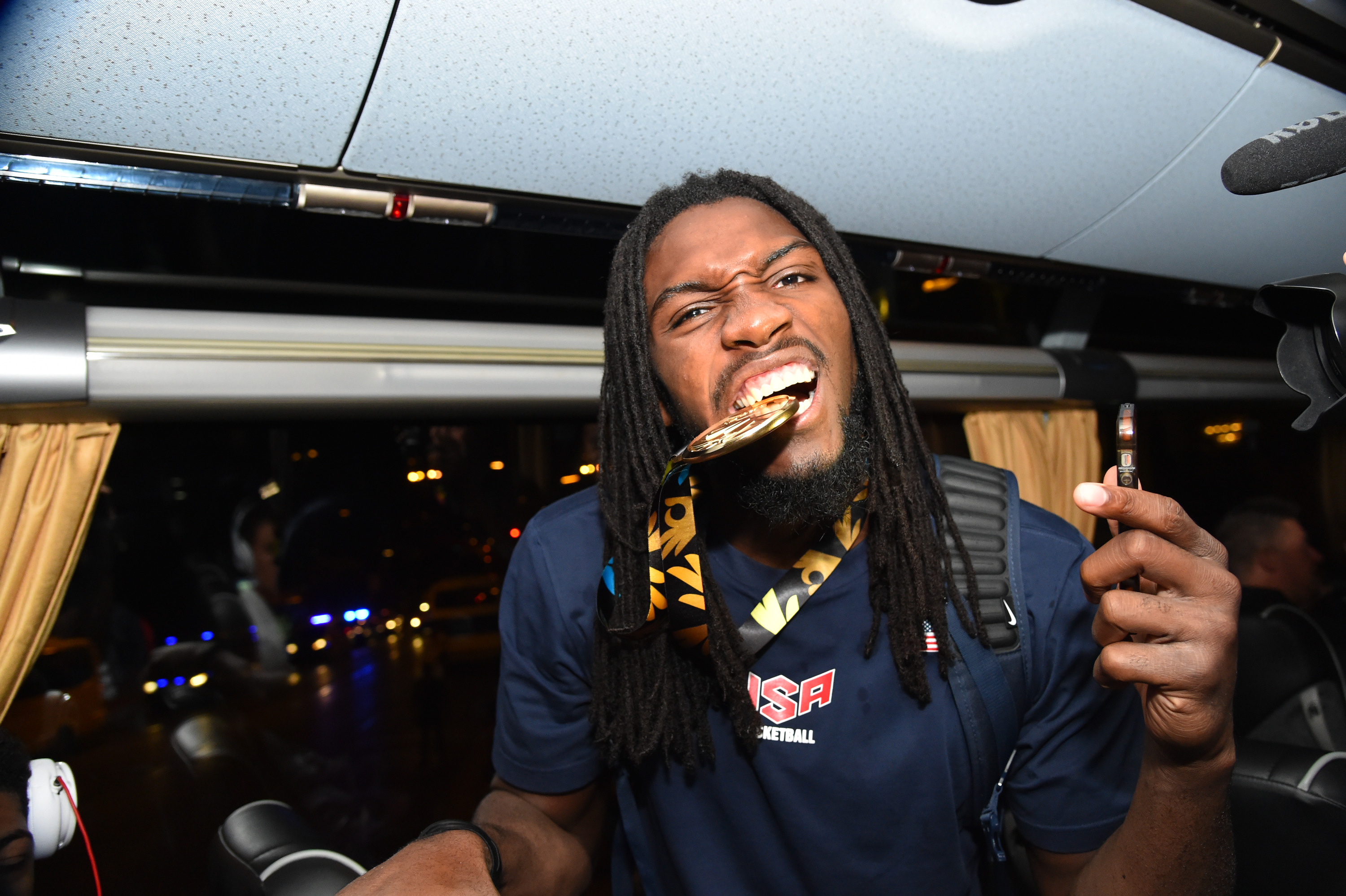 There was no Spain on Sunday, and no upsets, and almost no drama in this entire tournament. In the actual gold-medal game, things were interesting for about 15 minutes. Serbia hit its first seven shots, Anthony Davis went to the bench with two quick fouls, and Serbia point guard Milos Teodosic wiggled through the lane at will.

“This is exactly the script that Coach Djordjevic wanted,” Fran Fraschilla said.

Then DeMarcus Cousins came off the bench to replace Davis, and once Boogie picked up all the Brow duties, it was over. He patrolled the paint and held down the boards, and he was the riddle the Serbian offense couldn’t solve. And while Boogie shut down the scoring on one end, Kyrie Irving went to work abusing Teodosic on the other end.

“One of the things you do with Teodosic,” Fraschilla said, “is you make him defend, because that’s not his strength. He’s a conscientious objector on that side of the floor.”

Young Kyrie heeded this advice, and a 15-7 Serbia lead turned into a 22-15 USA lead late in the first quarter. By the middle of the second quarter, the lead was 26 and the game was pretty much over. Boogie smothered the Serbian big men (Nenad Krstic!) on defense, and after streaky shooting all tournament, Team USA hit 12 of 16 3s in the first half. James Harden and Irving combined for 35 points and almost outscored the entire Serbian team by themselves in the first half. This was not the script that Coach Djordjevic wanted.

Sunday’s final was as interesting as every other game the U.S. played in Spain the past few weeks. There was that brief interlude when things were close and it looked like Team USA might get tested, and then — BOOM! — shots started falling and the defense tightened up, and the game was pretty much over.

The FIBA Basketball World Cup is pretty much a meaningless event, mind you. It takes place during football season, which makes no sense. It’s newsworthy only if the U.S. team loses, and even then, it’s not half as embarrassing as a loss in the Olympics. The U.S. games in this tournament were all blowouts — brutal enough for people to start wondering about the progression of basketball around the world — so it was tough to get too invested in any one game, and now that we won them all, it’s tough to get too excited.

So, at the end of all this, I think I’m just happy for Boogie and Faried. Now that Team USA’s back to dominating everyone again, the individuals are what make international basketball exciting.

In 2010, in Turkey, we saw Kevin Durant go from a great young player to the leader of Team USA — and, ultimately, to one of the two best players on the planet. He had previously led the NBA in scoring, but soon he was in the Finals, and last year he was MVP. Those two weeks in Turkey were when you started to feel everything click for him.

This year that didn’t quite happen with Davis. The offense didn’t flow through him, so he had trouble getting involved, and the takeover we were hoping for never really got going. Instead we got Boogie and Faried.

Neither player has made an All-Star Game, and they’re both stuck in hopeless NBA situations that compound their shortcomings and make us focus on everything they can’t do. Nobody knows what the Kings or Nuggets are doing, and if there’s no clear plan now, things probably won’t get much better in the next few years. That cloud of uncertainty (Nuggets) or misery (Kings) makes it much harder to enjoy them all year.

That’s why Team USA was so important. Maybe it helps guys like Faried and Boogie rejuvenate their careers a little bit and sets them on a different track. At the very least, it helps keep the rest of the basketball world from writing them off just because they can’t carry their teams to the playoffs.

The last few weeks were one long reminder that “Oh right, Manimal is AWESOME.” On Sunday it became, “Oh, OK, yeah, DeMarcus Cousins could still be one of the best big men on the planet.” I didn’t really enjoy watching the games, but watching these guys be set free and unleashed on helpless Europeans never stopped being entertaining.

Whether it was Melo and Kevin Love in Beijing or the past few weeks with Boogie and Faried, that’s always one of the best parts of Team USA, and it’s why I hope we keep investing in USA Basketball forever. International basketball is where you get to watch certain stars remember that basketball can be fun. Instead of wasting away on mediocre teams losing their way through February, guys like Boogie and Faried can win games that actually matter.

They’re both still stuck in Sacramento and Denver, sure, but that’s cool. Worst-case scenario, we get to watch them do this again at the Olympics in two years. Until then, Jonas Valanciunas’s reaction remains the best thing to emerge from the FIBA Basketball World Cup.

That’s what Team USA did to the rest of the world.

1. The second-best thing to emerge from the FIBA Basketball World Cup was this James Harden Segway GIF. The third-best were these jet ski pictures. The fourth-best:

2. Ten years from now, it’ll be really weird to look back and remember that Rudy Gay and DeMar DeRozan somehow played on a national team. Or maybe we’re there already.

3. Ten years from now, it’ll be really awesome to remember that Plumdog Millionaire somehow played on a national team.

5. Derrick Rose in this tournament: didn’t look very good, but didn’t get hurt! Let’s call that a win.

6. Fran Fraschilla: “We’re playing the game maybe not as artistically as some of these other countries, but we don’t have to play that way.” BOOM! Alley-oops and pull-up jump shots for everyone. While we’re here … Fraschilla was easily the most entertaining part of most U.S. games. He’s the closest thing America has to Ian Darke. I know he specializes in international and college hoops, but between the past few weeks and his work at the draft, there’s gotta be a way we can work him into NBA broadcasts during the year.

7. I liked how Coach K turned that halftime segment into an audition for the corporate seminar circuit: “In order to win, you have to be worthy of winning. ‘Worthy of winning’: What does that mean? It means that you’re playing as one, you’re working hard together, you’re unselfish.”

8. I’m so ready for Coach K to stop coaching our national team.

9. As for the rest of the future with USA Basketball, here’s one more plug for the “one cycle” idea that gives us one set roster of young players for FIBA and the Olympics every four years. It would end these half-assed all-star teams we scramble to put together every two years, and it would eliminate the pressure on superstars to play in the middle of their prime. It’s a great way to market up-and-coming stars to the rest of the world, and it allows guys like Davis, Irving, Cousins, and Steph Curry a chance to grow and be leaders on the national team. It’s smarter and more fun. And it might dilute the talent just enough to make things interesting with some of the other countries around the world. You know, just not this year, because …