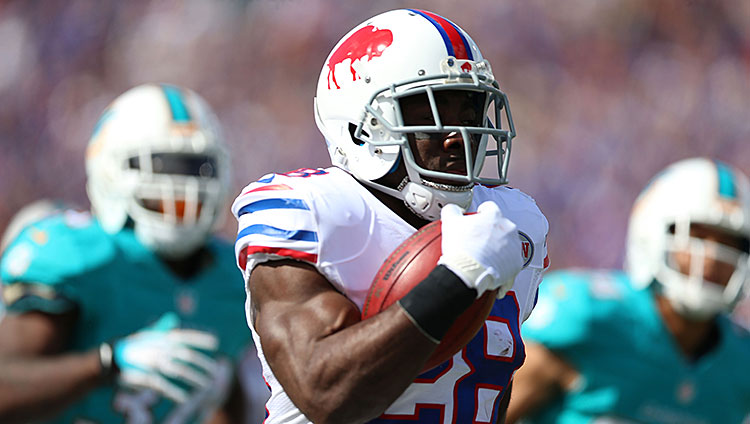 He turned 34 in June, but the Antonio Gates from yesterday looked a lot like the Antonio Gates we met a decade ago — an unstoppable red zone machine, one that caught touchdown after touchdown. He had three Sunday as the Chargers put together maybe the most impressive win of the day over Seattle. Gates is a stiffer, slower version of who he was, but he can still do this:

For the Chargers, that’s enough. To watch Gates and Philip Rivers make it up as they went along was to watch two players who know everything about each other — and then some. Gates’s first touchdown came with a Seahawk draped on his quarterback. His third came on second-and-20. All San Diego had to do was get near the goal line. Gates (and Rivers) did the rest. With those three scores, Gates has now caught more career touchdowns than all but 10 players. Two more will push him past Isaac Bruce and into the top 10. At this rate, I’m guessing he might get there.

After watching them shake the change from Josh McCown’s pockets last week, it was hard to tell whether the Panthers defense was the same sort of group it was a year ago, or if the Bucs were just that bad. Now, we probably have our answer. A week after torching the Giants, Matthew Stafford and the Lions offense were held in check all afternoon. It took Stafford 48 attempts to get his 291 yards, and the Panthers seemed to shut the Lions down on every meaningful third down they faced.

Whatever his flaws in previous years, one plus Stafford brings is that he rarely gets sacked — 23 times last year, on a ton of drop-backs. Carolina got to him four times yesterday, with 2.5 coming from Mario Addison, Greg Hardy’s replacement. Carolina’s ability to play well without Hardy should have no role in whether he’s allowed to play moving forward, but it’s worth nothing that the players the Panthers still have are pretty damn good.

You have to see games like yesterday’s to believe how Luke Kuechly and Thomas Davis are able to so thoroughly mask Carolina’s lesser players in the secondary. By covering more ground in the middle of the field than any linebacker duo in the league, they limit the scope of everyone else in coverage. Ron Rivera and defensive coordinator/occasional Ron Howard impersonator Sean McDermott have a few great players, and they know how to use them. It’s amazing how far that can go.

Someday, Jordy Nelson might get his due as one of the six best receivers in the league, but until then, he’ll just be over here, casually putting up nine-catch, 209-yard games.

Nelson’s final tally was absurd yesterday. He spent the first half serving as Aaron Rodgers’s outlet when nothing else was working. Rodgers forced more than a couple of balls to Nelson down the right sideline before the rest of the offense got clicking. Things got a little easier in the second half, when the Packers seemed to figure out they were playing the Jets’ secondary.

The best moment of the day: when a former walk-on and undrafted quarterback puts together a game-winning drive in his first professional start and then goes storming down the sideline yelling, “Let’s go! Fuck yes!” at people who learned his name Tuesday.

This is what we all — OK, some of us — were waiting for! The Cowboys have a big, physical offensive line, an excellent running back, and, against teams not quarterbacked by Jake Locker, a pretty bad defense. The way to combine all of those elements into something workable is by grinding opposing defenses into dust, and refusing to leave the field. That’s exactly what the Cowboys did yesterday.

Dallas running backs had 220 yards on 43 carries, including 29 for 167 from DeMarco Murray. Part of the Cowboys’ commitment to the run was undoubtedly their 16-0 halftime lead, and part of their 41:11 to 18:49 edge in time of possession was Locker’s awfulness and the Titans’ inability to sustain drives. But the skeleton of a winning formula was there: Hand it to Murray until you throw it to Dez Bryant. Rinse. Repeat.

Because the Ravens pasted the Steelers in Week 2, the Bengals’ stifling of Joe Flacco in Week 1 looks a bit more impressive, but that was nothing compared to what Cincy did yesterday. A week after throwing for 448 yards and three scores against the Saints, Matt Ryan managed only 231 yards — on 5.3 yards per attempt. Take out the 80-yard, broken-play touchdown to Steve Smith last week, and quarterbacks are averaging 4.72 yards per attempt against the Bengals defense. That’s not very good.

It’s hard to consider the Bengals offense as winners, considering A.J. Green might have a Lisfranc sprain that would sideline him longer than anyone on earth would like, but they did manage to move the ball well without him.

Giovani Bernard is endless fun. Without Green, the running game is likely to suffer as teams load the box (like Atlanta did Sunday). But Hue Jackson was creative in getting Bernard the ball. Atlanta’s defense isn’t scaring anyone, but the Bengals probably should have scored closer to 30 points. Mike Nugent missed three field goals — three. They should really ask Mohamed Sanu if he can kick. He’s done everything else.

Any Buffalo Bill from the ACC

We can start with all of their Clemson Tigers. C.J. Spiller put in some work as a kick returner in college, but before last week, he hadn’t been back deep for the Bills since 2011. I’m guessing that might change after this:

The Bills outplayed the Dolphins — thoroughly — the entire first half but had just nine points to show for it. Spiller’s third-quarter return finally broke things open. He also finished with 69 yards on 12 carries. Yes, that’s helped by one 47-yard chunk, but that’s what you’re getting from Spiller. When he’s healthy, few guys are scarier on a given play.

It might not be long before one of those guys is Sammy Watkins. The ex-Clemson receiver sliced up the Dolphins defense on crossing routes all game, including a nifty touchdown that may not have been a touchdown but was called a touchdown, so who cares?

If Watkins is free to run across the entire field, there aren’t many corners who are going to keep pace. The question facing the Bills this season was whether EJ Manuel (Florida State) would have enough time to find him open when that happened, especially with rookie right tackle Seantrel Henderson (The U) tasked with blocking Cameron Wake, who I’m pretty sure still had Tom Brady’s blood in his teeth. Not only did Wake not get to Manuel — no one did. The Dolphins went sackless, and the Bills went to 2-0.

Marty Mornhinweg has no fear of late-game shame. A man who once chose to kick off in sudden-death overtime has nothing left to lose. Still, this was pretty bad. Just when it looked like Geno Smith had found Jeremy Kerley for a game-tying touchdown, we found out that someone along the Jets’ sideline had asked for a timeout. Mornhinweg appeared to be the one asking, but Sheldon Richardson actually copped to it after the game, saying that he started yelling to the official when he saw that Mornhinweg wasn’t getting his attention. He was really just trying to help the guy out. Of course, none of this would have mattered had the Jets held on to the 21-3 lead they’d built.

The Bucs could have avoided their own trouble by not letting a third-string quarterback in his first start keep the game close on the road. But that’s what they did, and with 20 seconds left, Tampa Bay was down by two with the ball on its own 20. When McCown hit Mike Evans inside the Rams’ 40, it looked like the Bucs were at least going to get their shot at a field goal, but when Evans couldn’t get up from the hit, it led to a 10-second runoff that ended the game. I would say that’s an awful way to lose, but after losing to Derek Anderson and Austin Davis in back-to-back weeks, the Bucs deserve to lose awfully.

Speaking of deserving, the Vikings offense deserves Teddy Bridgewater. Minnesota was always going to have a hard time without Adrian Peterson, but its offensive struggles against the Patriots went much further.

You can pick which Cassel interception is your favorite. There are plenty of options. He threw four yesterday while completing barely half his passes. Even without Peterson, and even when Cassel wasn’t throwing the ball to the other team, the Vikings left a lot of plays on the field. It’s hard to see how the Jags, with Blake Bortles, could benefit from a change. It’s not hard to see how Minnesota could.

Jacksonville’s struggles in this game are almost impossible to believe. Chad Henne was sacked 10 times. Seriously. Washington got to him 10 times, including four from Ryan Kerrigan. It did this on 40 drop-backs, which is a truly astonishing rate. The Jags were in passing mode because they were down 21 about midway through the second quarter, but it also might have had something to do with them averaging 1.1 yards per carry on Toby Gerhart’s seven runs. Typically, people start clamoring for the rookie quarterback around this time, but Bortles doesn’t deserve this.

I want to know how long it’s going to take for Outside Drew Brees and Inside Drew Brees to get recognized as different people. Last year was really the first time the gap was all that concerning: Indoors, Brees completed 72.8 percent of his passes, averaged 8.77 yards per attempt, and threw 30 touchdowns compared to five interceptions. Outdoors, the touchdown-to-interception ratio was nine to seven, and his completion percentage dropped more than 10 percentage points. His yards per attempt went from an Aaron Rodgers level to an Alex Smith one.

Yesterday, a combination of the setting and the Browns defense brought him even with Brian Hoyer. Their two lines were almost identical. One thing to note, though: Hoyer was throwing to Andrew Hawkins and Miles Austin. Brees was throwing to Jimmy Graham.

Even with the Saints’ road struggles, they were supposed to be a better team this year because their defense was supposed to be better. But the completion Hoyer made to Hawkins to set up the game-winning field goal was possible because two Saints nearly knocked each other over covering the same receiver running a five-yard out. Their offense will always keep them hanging around, but with the Panthers already at 2-0, it wouldn’t be too early for the Saints to be just a little bit worried.