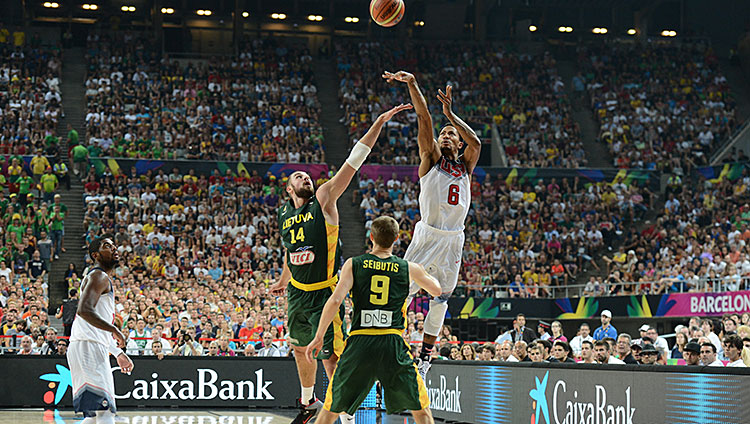 On Sunday, the U.S. men’s national basketball team easily defeated Serbia to win the first FIBA World Nap Cup of Basketball. The tournament failed to capture the attention of mainstream basketball fans, but it was still an important tournament, especially for Derrick Rose.

Statistically, Rose didn’t play well in the World Cup. Many were quick to note that his shooting numbers were horrid, which they were: He converted a lousy 25 percent from the field and made just one of his 19 3-point attempts. People started to question his ability to shoot — an interrogation that itself reveals either memory loss or unfamiliarity with the 2010-11 NBA MVP.

Of course Derrick Rose can shoot. Just a few years ago, Rose was, hands down, one of the best jump-shooting guards in the NBA. At his peak, he blended volume and efficiency in a way that made him the envy of every other backcourt player.

Consider his second year in the league. Rose turned 21 a few weeks before the beginning of the 2009-10 season. During that campaign, his calling card was his insane midrange game, which he used to become one of the best scorers in the NBA. Rose’s combination of speed, vision, balance, and finesse was not only incredible to watch, it was virtually impossible to defend.

Back then his ferocious attacks ended with Rose either turning a corner and making a play at the rim or stopping on a dime and rising up for one of the league’s softest and most reliable pull-up jump shots. Looking at his chart from that season reveals an attacking guard who was breathing fire from almost every spot inside the arc. 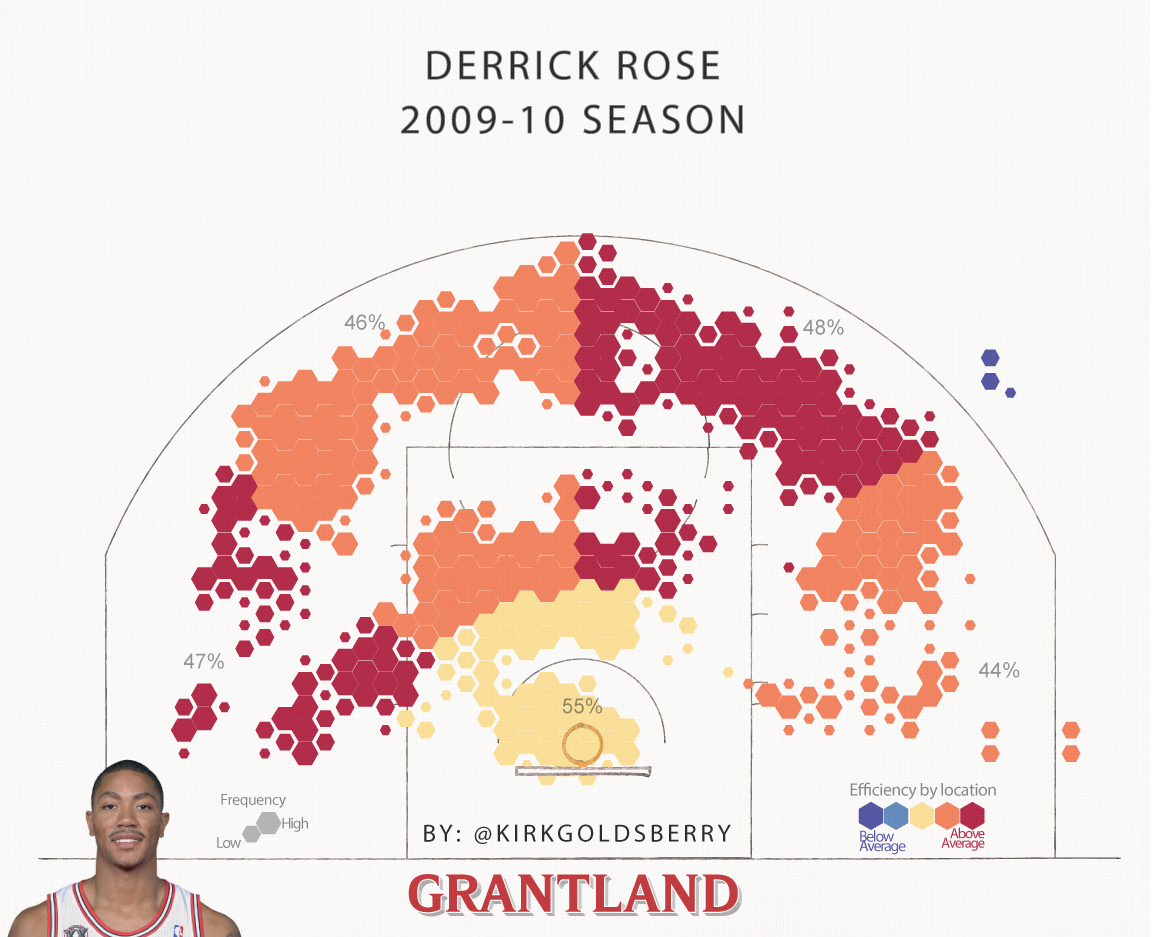 The numbers back that up. In that season, only three players attempted more midrange shots than Rose: Dirk Nowitzki, Kobe Bryant, and Kevin Durant. But Rose outshot all of those hacks (jk, jk) in terms of field goal percentage in the midrange. Of the 25 NBA players who attempted at least 500 midrange shots that year, Rose ranked first in efficiency, knocking down 47 percent of his 794 midrange attempts. Those numbers are straight-up Dirkish, and that’s a fake adjective I don’t throw around very much.

Rose’s jump shot underwent drastic changes in his 2010-11 MVP season. Before that year, he hardly ever shot 3s. During the 2009-10 season, 58 percent of his shots came in the midrange, and he took just 60 shots from beyond the arc. The next year, those numbers were 34 percent and 385, respectively. In other words, Rose sextupled his 3-point-shooting volume while turning down his midrange game, a clear sign he had transformed his scoring approach. But why?

Looking at his common shooting spots between those years, the differences are stark.

It’s not unusual for young superstars to evolve year to year, but given that Rose was so effective inside the arc as a 21-year-old, it’s hard to parse his sudden, outward migration and his newfound obsession with 3-point shooting at 22.

While his volume and efficiency ballooned beyond the arc, it caved inside it. His overall midrange field goal percentage dipped to 40 percent. That’s not so Dirkish.

That decline in midrange efficiency persisted into the 2011-12 season, when Rose converted 39 percent of those 2-point jumpers. Suddenly his midrange game was average. His jumper has never really returned to those 2009-10 levels.

His recent World Cup performance offers little reassurances that it ever will. If it showed us anything, it demonstrated that, right or wrong, the 3-point shot is going to remain a big part of his scoring portfolio. In Spain, close to a third of his shots came from beyond the shorter FIBA 3-point line, but remember that he made only one of those 19 attempts.

Did Rose’s range-expansion project screw up his game overall? It’s hard to say. But there’s no doubt he is at his best as a catalytic attacker, especially playing within a stagnant Bulls offense that needs all the catalysis it can get.

Every time Rose spots up beyond the arc, that’s one less time he’s making plays inside of it. As Tony Parker has demonstrated so effectively over the past decade, you don’t have to shoot 3s to be a dominant point guard in the NBA. Like Rose, Parker possesses a freakish blend of speed and finesse. But unlike Rose, Parker has largely left the long-range shooting to his teammates. Granted, Parker plays within the league’s smartest offense, but that’s kind of the point — in 2014, NBA offenses are driven by the behaviors of their point guards.

Rose is different. But when you consider his mediocre long-range numbers, alongside that 2009-10 shooting chart, it’s not crazy to suggest that he take it easy on those 3s and return to his bread-and-butter playmaking inside the arc.

Rose is tough to analyze — there are a lot of moving parts, some of which are stylistic, some of which are orthopedic. The injuries have been devastating, to be sure, but they’ve also obscured two years of data in his prime developmental period. As a result, it’s very difficult to characterize the state of his game right now or predict its trajectory. While the FIBA World Cup was wonderful, in the sense that Rose played nine games in 19 days without getting hurt, it’s fair to say he was not at his best in Spain. He is obviously rusty, and jumpers are generally the last things to come back.

Regardless, if he can stay on the floor and that jumper starts falling, the guy still has the potential to be one of the best scoring guards on the planet. He’s already demonstrated that. 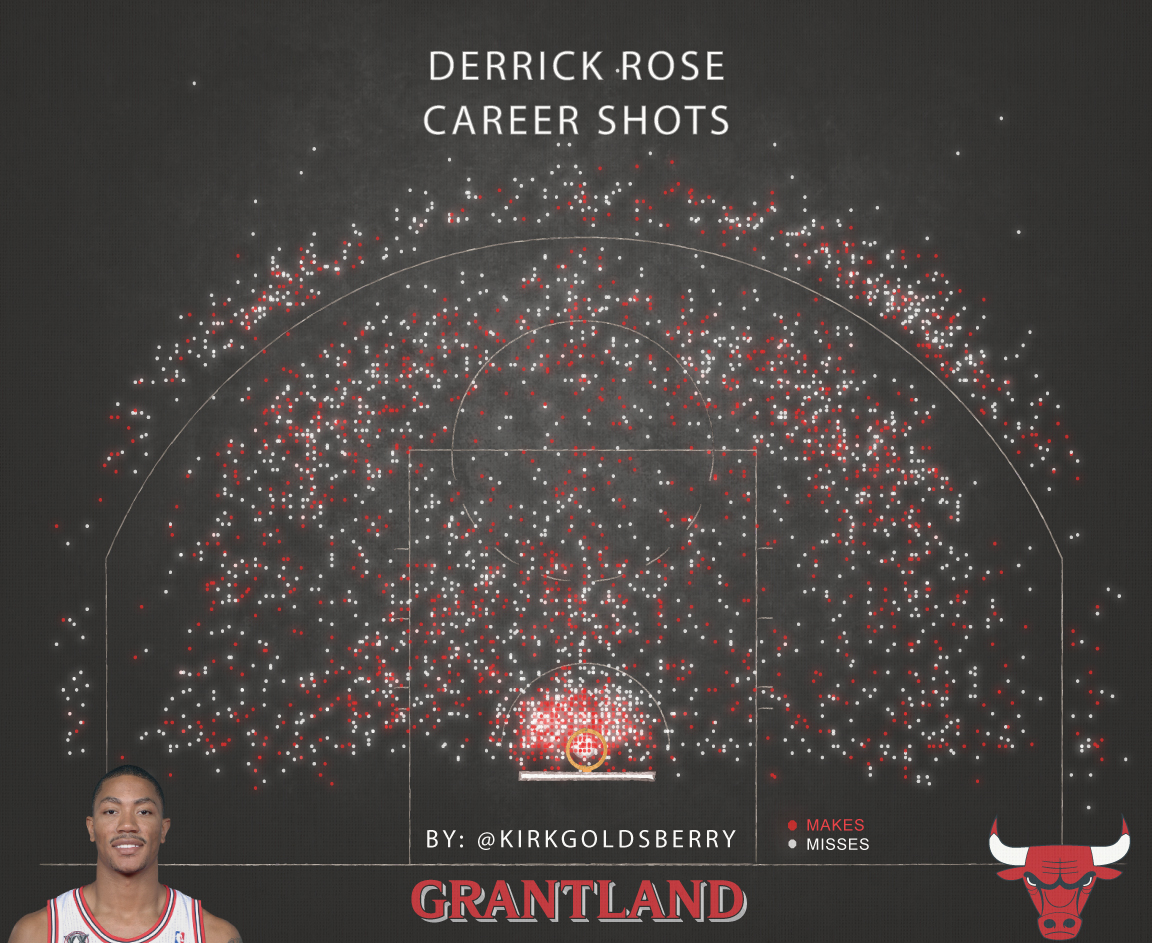