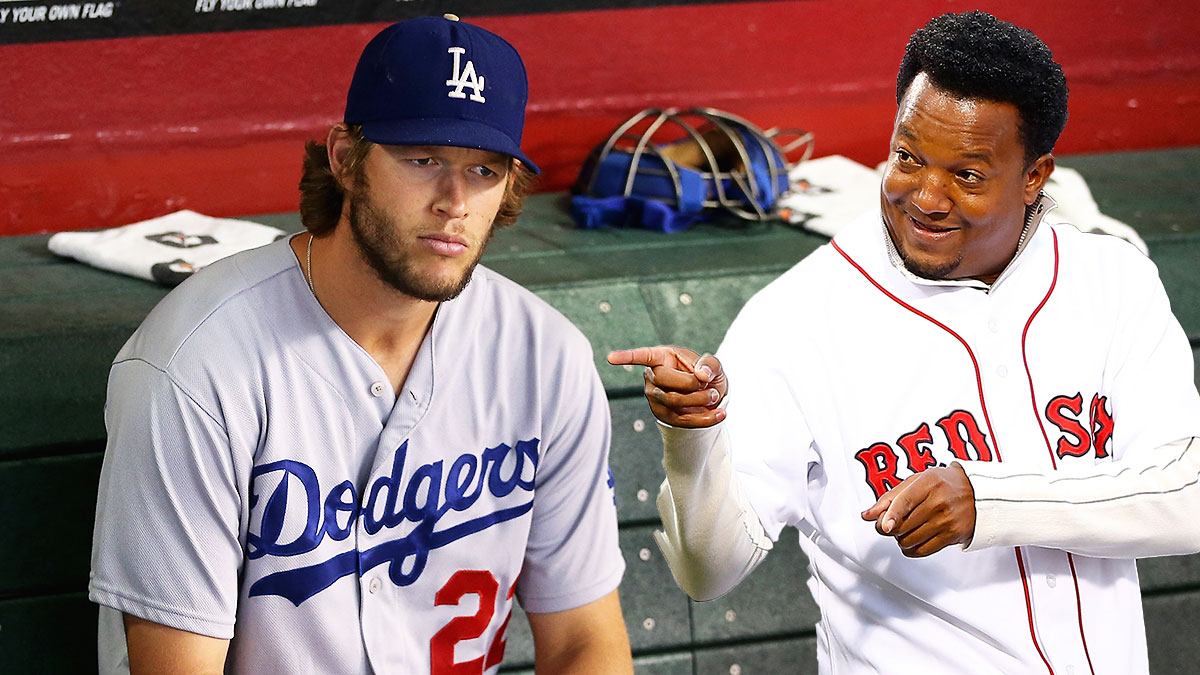 Pedro Martinez’s 2000 season here. I heard you were having a pretty good year, so I took a look at the stats, and wow: We have so much in common. We’re almost identical ERA brothers! Me at 1.74, you at 1.70. Both of us leading our leagues in most of the major categories. It’s only natural that people keep comparing us. For instance, I saw this thing on the Washington Post’s website where someone used some “fancy stats” to say you were having the best season of any pitcher since 1995. Actually, that article didn’t exactly compare us, so much as it implied that you’ve been pitching better than I did at any point during pretty much my whole career. But it did briefly mention me once, so that was nice to see.

There are so many parallels between us, like that we both spent our special seasons in such historic, beautiful ballparks. My season was so magical in part because it was set against the backdrop of beloved Fenway Park, with its distinctive 302-foot distance down the right-field foul line and its equally iconic 310-foot line in left, where, as you’ve probably noticed, there’s a giant wall that turns routine fly balls into doubles and homers. And you, dealing in Dodger Stadium, with its dense, homer-suppressing seaside air and its perfectly symmetrical outfield walls that yield such predictable bounces. Just gems of baseball, both of them.

Our accomplishments are even more memorable because we excelled for high-profile teams like the Red Sox and Dodgers. In my case, it was the American League East of the mid-dynasty Yankees, where I faced the second-toughest hitters of any AL pitcher with at least 100 innings pitched. In yours, it’s the National League West of the storied Rockies, Diamondbacks, and Padres, where you’ve faced the weakest hitters of any NL pitcher. As fierce competitors, we always want to test ourselves against the elite. It can’t be easy to train your whole life to compete against baseball’s best, only to show up at the ballpark, look at the opposing lineup, and see Alexi Amarista again. Yet you still find a way to stay focused.

Speaking of weak opponents, I particularly want to congratulate you on how you’ve handled opposing pitchers. Whenever one comes up, you must think, Man, this guy is soooo bad at hitting baseballs. Imagine how embarrassing it would be if he hit one here? I didn’t have to deal with that pressure. In the American League, all I faced were actual hitters, so I never had to wonder about things like whether it would even be fair to throw a breaking ball to a guy who probably couldn’t catch up to a center-cut fastball if he knew one was coming. In 2000, AL designated hitters, on the whole, had an .827 OPS, higher than any other position besides first base. The great thing about that was that when one of them got a hit (which happened pretty often against most pitchers, because, again, real hitters), no one was like, Wow, how did he not get that guy out, you know? Facing someone with instructions not to swing, or who (when he does swing) looks like this, would psych some guys out. Not you, though. You’ve faced pitchers 45 times, and they’ve gone 3-for-39 with 21 strikeouts. That says so much about your mental toughness.

I also want to commend you on being clean. It’s a relief to say that with such certainty, because when I was playing, pre-testing, people had to wonder who was taking what. Not me, specifically — more the hulking human chemistry experiments I faced every day, who could and did ingest and inject whatever they wanted without consequences. Nowadays, you pop one greenie and you might miss the rest of the season. I think I’d have a hard time maintaining my edge, knowing I was pitching to plain old athletes and not the superhuman slugging machines that were still no match for me. Have you found this to be true?

Now, I have to admit: I had some help. Jason Varitek was a heck of a catcher — even those “fancy stats” say so. ;) A.J. Ellis, however … really good guy. Good arm. Maybe a good game-caller. Not so good at that stealing strikes stuff. You’re probably wondering what it’s like to throw to a truly skilled receiver. Well, you know how, now that umps are evaluated with cameras and computers, they can’t get away with winging it and putting their personal stamps on the strike zone? And you know how as a result, the zone is way bigger than it was when I pitched, particularly down, where it’s hard to hit for power? So I guess you do know what it’s like. In 2014, every pitcher has Varitek catching, even when Ellis is. Not to take anything away from you, of course.

I could go on and on about how hard it must be to have to rely on heat maps, in-depth breakdowns of batter strengths and weaknesses, and instant access to video instead of trusting a pitching coach to come out and say, “I think this guy’s a high-ball hitter,” or going by gut instinct based on what the batter has done against you in some meaninglessly small sample. Simpler times in 2000, man. Much less to worry about. And since we’re talking about distractions, don’t get me started on defensive shifts. All those try-hards moving around from batter to batter and pitch to pitch, drawing on sophisticated data we didn’t have to position themselves in the precise location where the ball is most likely to be hit. Sure, guys, go ahead, move whenever and wherever you want. Not like I’m trying to concentrate over here. Right? Fortunately for you, the Dodgers don’t shift that much — only 208 times so far this season. Still, 208 shifts would’ve led the league in 2011. And I played a long time before 2011! No shifts back then. Dodged a bullet there.

It’s amazing how much baseball has changed in the last 15 seasons. For example, Alex Rodriguez: best player in baseball then,1 disgraced, suspended, and on LinkedIn now. Or, picking some other differences off the top of my head, look at league ERAs and strikeout rates. In 2000, the average AL starter had a 5.09 ERA and struck out 15.0 percent of hitters. In 2014, the average NL starter has a 3.75 ERA and strikes out 19.4 percent of hitters. Did you know that in 2000, Roger Clemens was the only other qualified AL starter to have an ERA lower than the average NL starter’s this season? The ERA gap between me and Rocket was as wide as the one between you and Josh Collmenter, which spans 21 other starters (in the NL alone). Crazy, right? Really makes you think. I mean, can we even count on a 1.7-something ERA or the ability to strike out well more than a batter an inning meaning the same thing one season that it does the next? At least it’s heartening to know that baseball still has some constants, like great pitchers getting the recognition they deserve.

Anyway, you probably have pitchers to strike out, so I won’t keep you. Just wanted to get in touch to tell you how much I admire what you’re doing, and how much it means to be mentioned in some of the same sentences as an ace who’s achieved what you have under adverse conditions.

Philip Rivers Is Not Scared, and Other Lessons From Two Weeks of Football