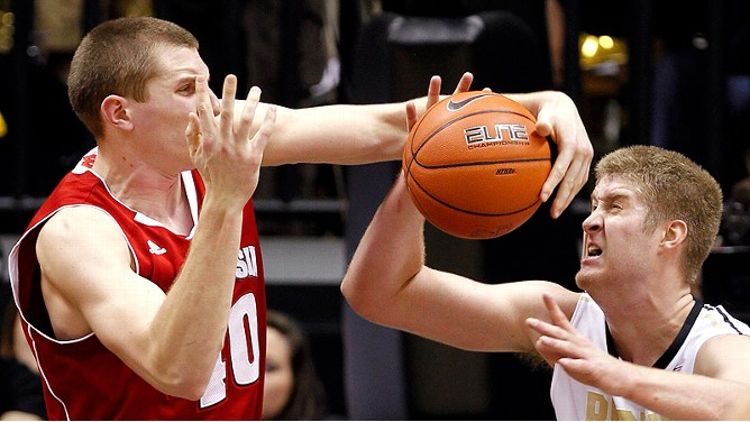 When Jontel Evans’ 3-pointer rattled out at Cameron Indoor Stadium on Thursday night, Duke held on for a narrow 61-58 win over Virginia. Duke’s lengthy home-court winning streak, which began in February 2009, was intact at 44 games. No fan section in the country can match the fame of the Cameron Crazies, but 531 miles to the northwest, in West Lafayette, Indiana, Purdue’s “Paint Crew” saw the end of a streak that might have been even more impressive. Since a loss to Michigan State on Feb. 28, 2010, the Boilermakers had won 26 straight in Mackey Arena. Coming into Thursday’s clash with Wisconsin, they boasted the best home court advantage in the country’s toughest conference. And it had everything to do with their fans.

The official colors of Purdue are “old gold” and black, but as I looked around before tip-off Thursday, I noticed that that almost no one had chosen to sport the former. Outside, the temperature had dropped into the mid-teens as a driving snow covered the campus sidewalks. Inside, the sea of black was so overwhelming that the thin splash of red in the Wisconsin fan section gave me a knee-jerk sympathetic reaction. It was as though they were the underdogs, the good guys up against the dark villains. Then I remembered that these were Bo Ryan’s Badgers, and whatever else they were — consistent, plodding, maddening, even excellent — they were not heroes.

In five Big Ten games this season, the Badgers have yet to reach 70 points. Their opponents met the mark just once, when Iowa surprised them at the Kohl Center with a 72-65 win. If you had to write a Wisconsin game summary without actually seeing the game, the following script would get you close to the truth: “Each team scored about 30 points per half, and the margin of victory was between one and seven points. Both teams went through long scoring droughts. Both coaches credited the other team’s defense, and said they needed to execute better on offense.”

But the Badgers were having trouble in conference play. Three straight Big Ten losses sent them plummeting out of the Top 25, and they badly needed a victory to right the ship. Worst, they’d lost five in a row at Mackey Arena, with the last win coming way back in January 2005.

The only cure for all the bad omens was a hot start, and they got it, opening the game on a 22-4 run. At the under-12 media timeout, Purdue coach Matt Painter might have expected that his team had already blown a chance to win at home. But there are worse teams to trail by 18 than Wisconsin. The Badgers’ slow-down offense can frustrate comebacks, but it can also hoist them by their own petard when they undergo long droughts.

And Wisconsin knew what would happen if it lost the lead.

Badger junior Mike Bruesewitz, who finished with 12 points on 4-of-4 from 3-point range, vividly recalls his first trip to Mackey Arena as a freshman.

“I remember coming in here, sitting on the bench, and I was right next to the student section,” he said. “The first five or six minutes, all I could think was, ‘Man, it gets loud in here.'”

The memories of last year’s loss were bad enough that Badger sophomore Josh Gasser put the road game at Purdue at the top of his must-win list during the preseason. (As a side note, Gasser is a fun player to watch if you enjoy the antics of a subtle pest. He’s the kind of guy who will stand at the free throw line speaking to his team just before the other team shoots, forcing the opposing player to either wait for him or push him out of the way. If that player misses his first shot, Gasser will leave the line, walk past him while staring straight ahead, and clap in his face. He’s the gnat the other fans instinctively hate, but who seems to relish the role of provocateur.)

The Paint Crew, named in honor of Painter, has been around since 2005. Before that, they were called “The Gene Pool” (Gene Keady), and before that there was no united student section at Purdue. Today, they have one of the best student structures in college basketball, with officers and an advisory board. The fans are split, with about half behind each base line, and the rowdiest fans are in the south end. They seem to be led by a front-row fanatic who wears old gold face paint and some sort of wrestling belt. The synchronicity in the group is remarkable, as you can see in this video where it sings “Party in the U.S.A.” to Jared Sullinger (who, to his credit, calmly hit both foul shots).

The Paint Crew has created “moves” for each player on the team, and they employ them after every made basket. Terone Johnson, for example, gets a wide “0,” since that’s the number on his jersey. D.J. Byrd gets flapping wings, and Robbie Hummel, the veteran of veterans, has been around long enough to earn the “we’re not worthy” bow.

During timeouts, they dance as a choreographed unit. At any given point, you might seem them trot on fake horses just before bobbing back and forth doing the referee travel motion. It was also strangely hypnotic to watch the entire section do a slow, rhythmic “chugga-chugga” grind to “Seven Nation Army.” At the end of some songs, they punctuated the dance with a loud chant: “IU sucks!”

But like any good fan section, the strength of the Paint Crew comes mostly from its volume. Here, it has help from the building itself. Mackey Arena was built with a tin roof, which captures the sound and makes it reverberate when things are at a fever pitch. This was what Bruesewitz remembered, this is what Taylor and Ryan had worried about in practice, and this is what Wisconsin was desperately trying to avoid. It didn’t help that the Paint Crew rode the referees early and often. Whether the call was right or wrong made no difference; they were vociferous to an absurd degree. At first I thought they had a loose grasp of the actual rules, but it soon became clear that this was an intimidation campaign. They believed complaints now would pay dividends later, and they were right.

The Badgers managed to hold a double-digit lead into halftime, but had gone from 18 to 12, and after scoring 26 points in the first 10 minutes (an unheard-of pace for the Badgers), they came back to earth with just eight in the last 10.

While the teams strategized in the locker room, a man was invited onto the court for a skills contest. He hit a 3-pointer, drawing a roar from the Paint Crew, and sent them into a frenzy when he Tebowed in the paint. As far as basketball was concerned, it was one of the most exciting moments of the night.

Purdue’s Ryne Smith came up with two big 3s at the start of the second half, but Wisconsin’s lead was still 12 with 15 minutes remaining. Then Hummel, and Byrd hit 3s on consecutive possessions. 45-38. The Paint Crew fans could feel their moment coming, and they weren’t about to waste the opportunity.

It’s hard to describe the explosion when Terone Johnson’s 3 went down on the next possession, but I can say it was the loudest sports crowd I’d ever heard outside of Cameron. Sitting by myself on the media row, with no rooting interest and nobody nearby, I still got goosebumps as the volume escalated. It wasn’t just the students, either; looking around, even the older fans in the lower sideline seats standing and yelling. Near the court and in the rafters, 14,000 people were urged on by the force of their collective voices. More than any other college basketball fan base I’ve seen, they constantly recognized and added to their own strength.

After the game, I asked Wisconsin’s John Gasser if this was the loudest venue he’d played in this year. “Personally,” he said, “I think that was about as loud as I’ve ever heard.”

What had been a relatively dull and typical Big Ten game had suddenly gained the kind of energy that works its way into the bones. The fact that Purdue’s offense mostly consisted of wild drives and bombing away from 3 no longer mattered. Their shortcomings were nothing; they could be willed to victory. It had worked for almost two years, so why not tonight?

In the face of the deluge, Jordan Taylor, a senior and the Wisconsin’s leading scorer, gathered everyone in a huddle and urged them to focus on each other (Gasser gave him credit for calming them down, saying “Any time you have a leader like him, it makes things a lot easier.”), and Ryan called a quick timeout ahead of the under-12 to give his team two chances to breathe.

“It’s probably one of the toughest places to play in the country,” Taylor said later. “They prove it night and night out. We got a little shaky out there.”

How could they withstand the cacophony? I’ve watched enough games to stop believing my own absolutes, as in, “There’s no way Wisconsin can recover!” But still … if I’m being honest, it didn’t feel like there was any way Wisconsin could recover.

Bruesewitz didn’t panic. He thinks the best way to quiet a delirious crowd is by drawing a foul. “I think it’s almost better than making a shot,” he said. “It stops the game. It’s a negative for the other team, and the crowd can’t feed off it.”

But when Purdue narrowed it to 45-43, Taylor found Bruesewitz behind the arc, and the junior had no choice but to shoot. He nailed the shot, and Purdue’s momentum took a serious hit. More drudgery followed, but four minutes later, Bruesewitz hit from long range again. Now the lead was six, and when Ben Brust hit a 3 of his own a possession later, the game was effectively over. Wisconsin had taken the Paint Crew’s hardest punch and survived.

Still, the students had one last impressive moment. When Terone Johnson attempted a 3 with just over two minutes left, he faded back to watch its descent. The ball hit the back rim and bounded out to a spot where Johnson would have been if he’d followed his shot. Brust took the board instead, and the Paint Crew serenaded Johnson with boos as he retreated down the court. It was a strange moment, fans booing their own player, but it showed that the Paint Crew fans are more than just college kids screaming themselves hoarse; they appreciate and understand good basketball. Their support is boisterous, but they expect the same effort from the players in return.

Painter, Purdue’s coach, touched on this point after the game. “We have a good atmosphere here,” he said, “but I don’t think they helped us enough tonight because we didn’t give them the opportunity. If we play better, then they really have an effect on the game because of how loud it gets, especially on the south end.”

But the quality of the team didn’t match the quality of the fans on Thursday, and so a 26-game winning streak came to an end with a 67-62 Wisconsin win. Even the Paint Crew can’t cure bad basketball. As I left Mackey Arena, I eavesdropped on two fans parting ways at the bottom of the stairs.

The other shook his head. “All’s well that ends.”

Eds. note: This post has been updated to correct information about Duke’s home-court winning streak.