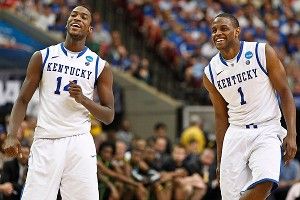 I’m not what you would call a “Kentucky fan.” I’m not from Kentucky, I’ve never been to Kentucky, and it might be a long time, possibly as long as forever, before I set foot in Kentucky. I really enjoy Justified, Ashley Judd doesn’t offend my sensibilities, and “Kentucky Rain” is the best Elvis song nobody knows about. But I’m pretty sure none of that makes me a Kentucky basketball fan.

(Pause. Half-hour writing break to listen to “Kentucky Rain” on repeat. Eat a doughnut, stare out the window, and imagine what it’s like to be outside. Head back to the computer.)

Let’s be honest with each other — once you’re past 25, life gets a little grim. Nothing unmanageable, mind you, just a little too real compared to what some of us were expecting based on a casual youth. And when I say “us,” I mean middle-class kids with fun childhoods who are now more or less fending for ourselves. I don’t mean poor kids, because they knew what was up pretty early. And I don’t mean rich kids, because they’ll be fine. I’m talking the front-lawn-playing, garden-hose-spraying, Sour Patch-kids-every-Friday-after-school children of the sub-suburban frontier. There seem to be a lot of us. IM me if you want to grab a beer.

So. Shit gets real, and we all go, “Damn, shit got real.” Which is why I like sports so much. Like many of you, probably, my sports fanaticism looks like a cosine curve between 0 and 2pi on the x-axis — peaking hard in youth, dipping off a little between 18 to 23, and coming back strong in adulthood. As a young person, I loved sports. As an old person (29, but screw you, I feel old), I need sports.

And it’s nice, once in a while, when sports live up to some lofty ideal I have no right to create in my head, but do anyway. Because — let’s be honest — the rest of my ideals have taken some knocks over the years. Political ideals, for one. What is up with politics these days?! (Seriously, what’s up? I haven’t followed it in about a year. Is Sarah Palin still doing her thing? Still being hilarious? Love her. What a character.)

Anyway, there I am watching Kentucky-Indiana last Friday, and son of a bitch if they weren’t playing some idealistic basketball. Fast, awesome, crazy basketball, with acrobatics and unapologetic gunning and wild, careening, full-tilt, frenetic hoops. But it wasn’t like a kid’s game, with 10 kids chasing the ball. This was somehow chaos-within-the-system, a controlled melody turned up to its maximum volume. And if I’m being honest here, Indiana was the real hero. Sure, the Hoosiers beat Kentucky back in December, but the circumstances were pretty different this time around. Everyone knew the Wildcats were better in March. So when Tom Crean was like, “Hey, Calipari, want to just run for 40 minutes and let the best man win?” Calipari was like, “Let me check with my assista-YUUUPPPP.”

And it got nuts. It got wicked in the best way imaginable. It was 50-47 at halftime, for God’s sake. I was supposed to be watching NC State-Kansas, being an ACC guy, but I couldn’t turn away. I started feeling spiritual. I tweeted something embarrassing, which I’ll now reprint for your amusement: “This is ecstatic, thrilling basketball. The way the game was meant to be played. It’s like a religious experience. Why we love the game.” I regretted that tweet almost immediately, but then I was like, whatever, this is an accurate historical record of how I felt at the time. An artifact for the future. I really wish I’d left off that “religious experience” part, though.

So, things were good and exciting. But in a weird way, the result was the most foregone conclusion of the whole tournament. When Indiana made the choice to run, you knew what would happen. Indiana would hang for a while, and then Kentucky would pull away because of superior talent. But isn’t that how things should be? You give me your best punch, I’ll give you mine, and let the best man win. No tricks, no strategies — let’s just run back and forth two hours and see where the chips fall. Bless you, Hoosiers. In a year where mind-numbingly slow teams have turned me into a pacist, bless you for playing unabashed, unadorned basketball.

At this point, I should mention that I am a hypocrite. This is not at all how I conduct myself in real life sports. I think winning is awesome, and I get a weird satisfaction about beating someone I shouldn’t. Being sneaky is better than letting the other guy win just because he happens to be better, right? But that’s basically Indiana did, when you think about it. There was nothing crafty or strategic about the Hoosier game plan. Crean just thought that maybe his team would play better on that particular night, and he didn’t care if the odds were against him. That’s noble. If Bo Ryan and Wisconsin were facing Kentucky, they’d slow the game down, place banana peels on the gym floor, and try to frustrate the Cats while hoping to catch fire on offense. That’s what happened in the Badgers’ game against Syracuse, and they almost pulled off a crazy upset. That’s how you should deal with a juggernaut, out here in the real adult world. But sports shouldn’t be exactly like the real adult world, which is partly why Wisconsin irks me on some philosophical level.

So, about the Kentucky Wildcats. Bold statement: Holy hell, are they incredible. It continued in the Elite Eight against Baylor, when the ‘Cats put together one of the best halves of college basketball I’ve ever seen and totally intimidated a team that is physically very intimidating. Whatever Baylor was attempting to do, it ended up looking like ants plotting against a steamroller on a flat street. One of the funniest parts of the game was how everyone was wondering what effect the Bears’ zone defense might have on Kentucky, but the game became so fast that they barely had a chance to even set it up.

What Calipari has crafted at Kentucky verges on beauty. I’m not (too) embarrassed to say that. The last time we saw the ingredients mesh like this was with North Carolina in 2009, and Kentucky has the advantage of not having Tyler Hansbrough flopping around and goofing everything up. With Michael Kidd-Gilchrist’s amazing speed and finishing ability, Doron Lamb and Darius Miller banging 3s, Marquis Teague setting it all up, Terrence Jones scoring on the run and in the post, and Anthony Davis sparking the breaks with blocks and finishing them with dunks, this team is an aesthetic delight. Talent is not enough, and a system is not enough. But when the system recognizes that the talent is hot, sets the control level at minimum, and starts making perfect sense in March, then we’re all just leaping up from the tattered couch and laughing until it hurts.

Please don’t lose, Kentucky. It’s not your fault, but you’ve started representing something to me. I’m counting on you. Give me that five seconds of feeling, that little escape, when you face Louisville on Saturday. Do it again Monday night. Do it for yourself, but acknowledge that we’re here in the distant background, reaping some benefit. When the tournament ends, we’ll both have to go outside, and I’ve heard the rain is cold in other states, too.