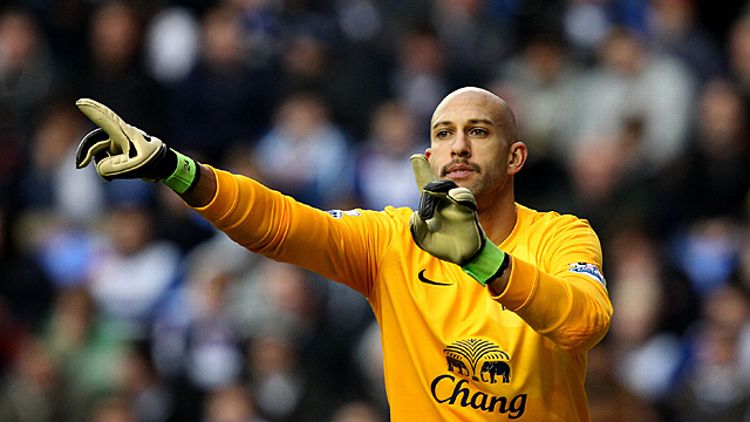 On a Saturday earlier this month, Tim Howard played 90 minutes and made two saves in Everton’s 2-1 victory over Sunderland at Goodison Park. Soon after the win, he hopped on a plane bound for Frankfurt to meet up with his American teammates, who were jetting in from all over the world. A couple quick training sessions later and Howard found himself standing in goal on a cold night in Krasnodar, Russia, brilliantly defending the beleaguered United States net as the Stars and Stripes managed a 2-2 draw. Howard made six saves, a few of them of the spectacular variety that U.S. supporters have come to expect. Four days later, following a charter from Russia to Germany and another flight back to England, the goalkeeper stood between the pipes at Reading’s Madejski Stadium, attempting to help Everton earn three more points in their English Premier League campaign. His club lost 2-1 as Howard made a solitary save.

The one-week total: one win, one loss, one draw in three different stadiums, training in three countries, four flights, four goals conceded, 10 saves made, and 270 minutes of soccer played. It’s all rather exhausting. Not all international breaks are so quick, but they all add miles and minutes to weary legs. And yet, for a world-class soccer player like Howard, these jumps between club and country are standard.

“That’s part of the responsibility when it comes to being an international: to be able to adapt quickly and not having to relearn the system again. You come in, you know what’s expected of you, you execute,” he said while drinking decaf espresso at 11 p.m. in the lobby of a Krasnodar hotel. “Listen, if you come into training camp and it takes everyone five days to get on the same page, obviously something is wrong.”

At least Howard plays the same position for club and country. Geoff Cameron, the 27-year-old, Massachusetts-born talent, lines up as a fullback for Stoke City while locking down one of two centerback spots for Jurgen Klinsmann and the U.S. (To make matters more complicated, Cameron is learning both roles on the fly; he played central midfield during his time with Houston Dynamo.)

Playing for your club, which pays the vast majority of your salary, and your country, which is an honor, is physically taxing, but it may be even tougher mentally. It means new styles, new faces, new training techniques, new everything. These changes can be doubly complex for a player like Jermaine Jones, who grew up in Germany without much interaction with Americans and doesn’t speak the best English.

“The hardest part was switching gears, the mentality of going from club to country. Trying to reassimilate with your teammates again, to get back into the flow, is the biggest obstacle,” former U.S. captain Jimmy Conrad says. “For those guys who do play in Germany or play elsewhere, they have to get used to a whole other language and get back into that mind-set. It’s about being flexible, being able to adapt to any environment, and to be able to do different things for both teams.” (Klinsmann speaks German, but he conducts training in English.)

Another downside to playing for your country is the increased risk of getting hurt. Club managers worry their players, especially the older ones, will pick up a knock or serious injury while on international duty. While the medical staffs work together to alert each other to a player’s ailments, soccer is a physical game. Shit happens. Against Russia, American captain Carlos Bocanegra went off in the 15th minute with what turned out to be a torn hamstring. He will miss six weeks, putting his spot on his club team, Racing Santander, in jeopardy.

That’s a tough blow for Bocanegra, who at 33 is in the latter stages of his career. The hamstring tear was probably simply bad luck, but maybe he had a minor injury that he tried to play through because he didn’t want to give a younger guy a chance to take his spot with the USMNT. You certainly wouldn’t blame him for doing so, would you?

Conrad said he didn’t think that was the case with Bocanegra, but he does know it happens. “One of the issues when you’re older is that the younger guys are pushing for your spot, and you don’t want to give up your opportunity to somebody. I can understand that there’s something you want to hold onto as an older guy,” says the KickTV host, who played 27 times for the national team between 2005 and 2010 — ending his career when he was, you guessed it, 33.

While veterans sometimes fight too hard to stay on the national team, younger players can spurn international duty as a way to ingratiate themselves with their club coach. They hope the dedication is rewarded with playing time or a spot on the game-day roster. The lax rules regarding what country a player can play for means some players have limited connections with the nation whose uniform they wear. In that situation, it makes sense that they’d be more loyal to their clubs. A player who gets hurt while playing for his country or struggles when he returns because he’s rundown from the constant travel puts his spot, and his paycheck, at stake.

At the end of the day, being an international can be a pain. But it’s also an accomplishment and, for many, a dream come true. Most importantly, however, it’s a choice.

“You don’t have a binding contract. If you don’t want to do it, you hold your hand up and say, ‘It’s not for me.’ I don’t think you’d want to do that, but you could,” Howard says. “If you commit to the team and you’re lucky enough to be selected, particularly on a regular basis, then there’s a responsibility to come into training, be a good teammate, be fit and ready, do your role, then go away and come back and do it again. It’s a huge responsibility. I wouldn’t say it sucks, but I would say it’s hard. But hard is OK. Hard is not a problem, really.”

The Trenchie Awards: The Patriots' O-Line, Paul Soliai, and the Best Line Play from Week 12