The Trenchie Awards: The Patriots’ O-Line, Paul Soliai, and the Best Line Play from Week 12 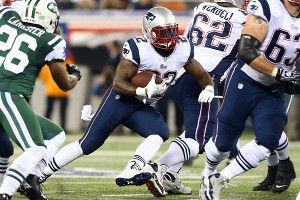 Maybe it was the 3-3 start, or the fact that they haven’t really stopped anyone, or that we’ve all just gotten used to it. Whatever the reason, it feels like this year’s Patriots haven’t gotten the type of adulation shown to previous installments of the Brady-Belichick offense, and it’s probably time for that to change. Through 12 games, the Pats are on pace for 592 points — three more than the record-setting group from 2007. The Pats are averaging exactly 37 points per game — a full touchdown better than any other team in the league.

Much of that success is a product of the same old New England machine. Tom Brady has a quarterback rating north of 105 and is fifth in the league in passing yards. That figure is made more impressive by the fact that as opposed to teams like Detroit, New Orleans, and Atlanta — all in the bottom quarter of the league in rushing yards per game — New England doesn’t need to throw to be effective. The Pats are sixth in the NFL in rushing yards per game with 143.7 — less than a yard behind the Texans and their vaunted running game.

New England isn’t San Francisco. The Niners average more than 163 yards on the ground, and they do it by means of assertion. Jim Harbaugh’s team is made up of five maulers up front and a big back behind them. They’re going to line up, and they’re going to run the ball. It’s what they do. New England’s success is predicated on the fact that they’re going to do whatever a defense allows them to. If that means letting Tom Brady throw for 450 yards, that’s fine. And if it means allowing Stevan Ridley and Shane Vereen to keep ripping off six-yard runs, that’s just fine too. 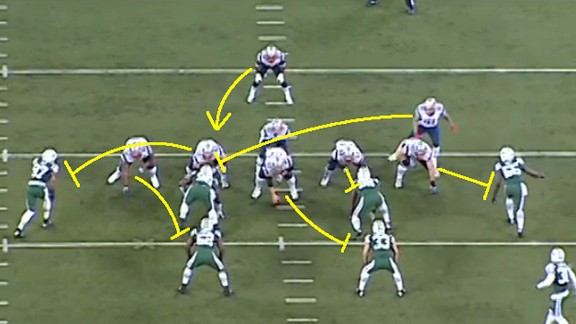 The above is a play from the second quarter of last Thursday’s win over the Jets. New England is lined up with a single back, and just before the snap, Aaron Hernandez motions down from the outside in an H back position on the left. LaRon Landry comes with him, but still, what the Jets have here amounts to a six-man box, with one of those six men being 207-pound Eric Smith. 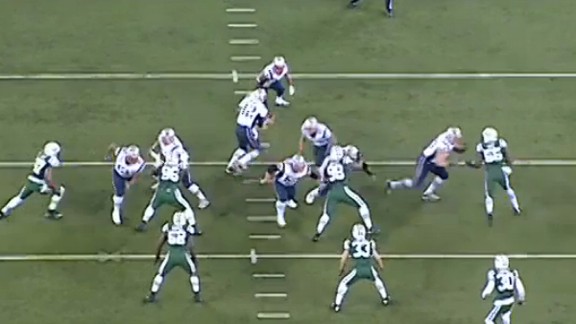 At the snap, we see the creative blocking scheme the Pats are looking to employ here. Both the center, Ryan Wendell, and the right tackle, Marcus Cannon, release onto the second level toward the two inside defenders while right guard Dan Connolly blocks out on the defensive end. 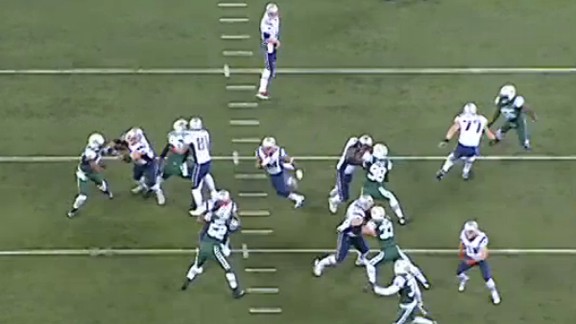 This leaves the defensive tackle as the only unblocked man on the line, but it’s soon apparent that’s what the motioning Hernandez is for. Coming from the left side of the formation, Hernandez traps the unblocked lineman, and with that block, each of the six Jets defenders is accounted for. Vereen has plenty of room to find a hole up the middle, and the result is a 13-yard gain.

There isn’t anything all that special happening here, but the play is indicative of what makes the Pats so dangerous. In accounting for Brady and the passing game, the Jets have one inside linebacker on the field, and that makes the choice for Brady an easy one. New England has six blockers to the Jets’ six defenders, and grabbing a big but not huge chunk of yardage is fairly easy. This is the type of play the Pats had all game — six-, seven-, eight-yard gains that add up over time and eventually force a defense to account for the run. Those are the type of games and moments when New England actually looks most impressive at their least spectacular.

At 5-6, the Dolphins stand as one of the most surprising teams in the league, and a big part of that has been the success the Dolphins have had in stopping the run. The Dolphins are allowing just 3.7 yards per carry — tied for the fourth-best mark in the league — and are allowing just 96.7 rushing yards per game. Miami’s front four is the strength of its team on either side of the ball, and holding Marshawn Lynch to only 46 yards on 19 carries was just a continuation of what they’ve shown all season. 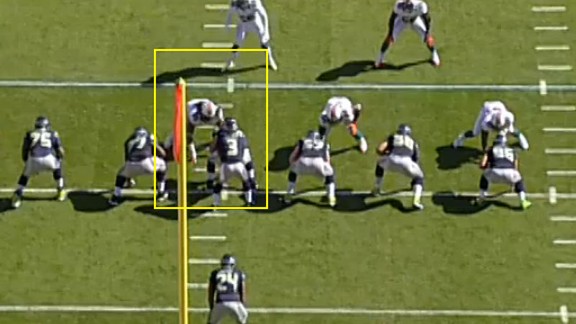 Paul Soliai had only three tackles on Sunday, but he was the most disruptive member of the Dolphins front throughout, and he did it through a combination of technique, effort, and a bit of lineman savvy. This is the first play from scrimmage. Seattle is lined up with a tight end to the right, and the call is a simple zone play to that side. Soliai is lined up as a one-technique tackle to the center’s left, and often on this type of play, that means the backside guard’s assignment is to cut him to allow for a cutback by Lynch. 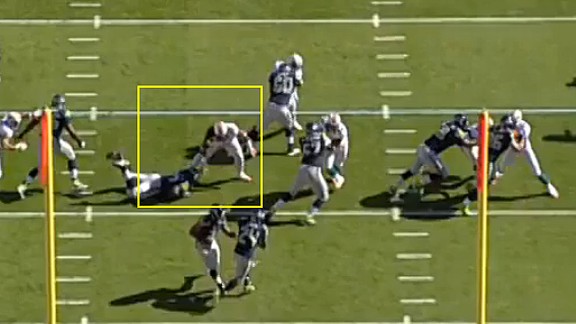 Anyone who’s ever played defensive line can tell you that few things are more frustrating than being cut, and for defenders everywhere, the news that the league might outlaw cut blocking in the future is welcome. The technique that coaches teach to combat a cut block involves jutting the feet back while simultaneously using your hands to push the defender away from your legs and into the ground. Practiced on tackling dummies, it seems fairly simple. Without warning, against a human being, it’s much more difficult. Here, Soliai executes the move perfectly. He manages to both dodge the block and use his right hand to keep the left guard off him as he continues moving down the line of scrimmage. 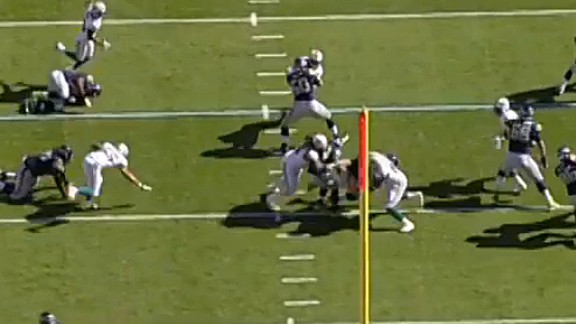 As he pursues Lynch, he makes sure to do so with enough control that he doesn’t allow for a cutback lane. With some help from his teammates on the play side, the play bottles up, and he makes the tackle from the backside for just a two-yard gain. 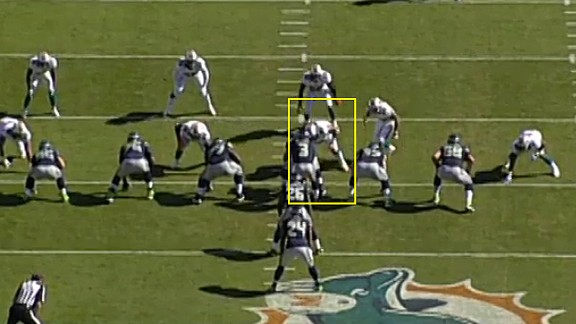 This is another play from the first half, this time with Seattle lined up in an I-formation with a tight end to the left. The Dolphins have four down linemen and two prowling linebackers behind, with Soliai lined up as a one-technique on the offense’s right. 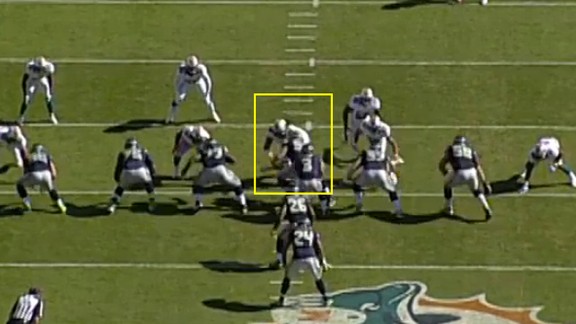 Judging by most of the players in the above photo, it almost looks like this image is pre-snap. Three of the four Miami defenders still have their hands on the ground. But you can see that before any of the other players on his defense have moved, and just as the ball was snapped, Soliai is already on the other side of the formation and already has Seattle center Max Unger beat. Defensive linemen can get tipped off to the snap count in several ways — cadence, a tell by the center — and here, it’s clear that Soliai knew exactly when the ball was being snapped. 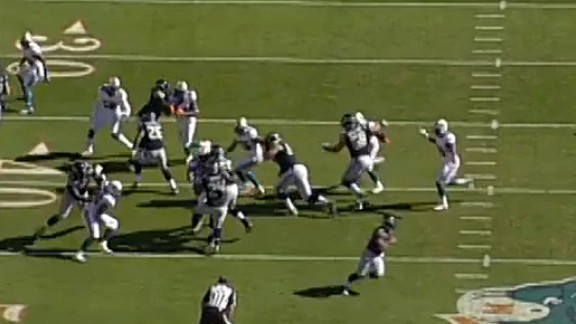 Nothing is more harmful to a running game than immediate penetration, and by beating Unger across his face and maintaining that leverage in pursuit, Soliai blows up in the play in the backfield. By pushing Unger all the way back into Lynch, Soliai forces the play to bounce outside, where all Randy Starks — who has also shed his blocker — has to do is wrap up the running back. Miami is full of playmakers on that defensive front, but in shutting Seattle down on Sunday, it was Soliai’s day.

About Last Night: Life Is a Brees for Falcons