The Phillies’ Combined No-Hitter, and Finding Fun During the Dark Days 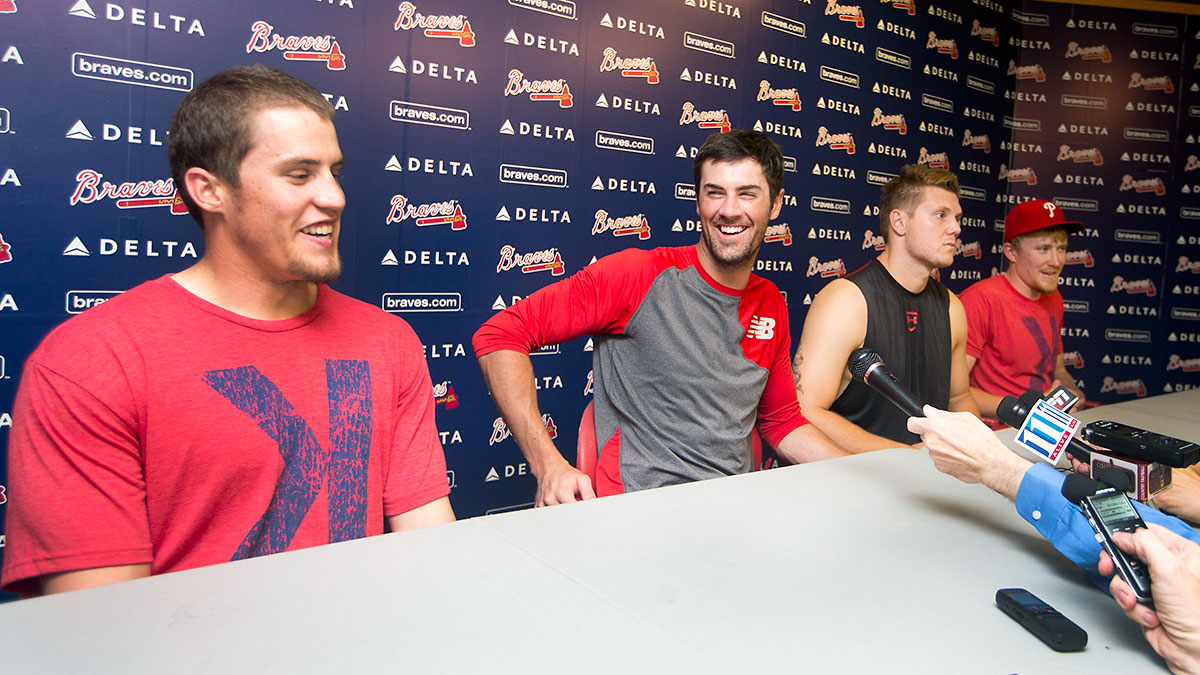 The baseball question I’m asked more than any other nowadays is, “When will the Phillies be fun again?” Sometimes, there’s a follow-up: “I haven’t watched a full nine innings all year; does that make me a bad fan?”

Watching the Phillies has become tough, particularly for people who lived and died with the team that, from 2007 to 2011, was not only dominant, but also extremely charismatic. In a matter of months, the Phillies went from fielding the best version of a team that predates the automobile to fielding a laughingstock. Now, they’re not only bad, but also frustrating and boring to watch. They’re run by an ownership group renowned for its lack of self-awareness and sclerotic intransigence, a group that has empowered both a general manager and field manager whose methods and imagination seem to be of the sort that even football coaches and communist dictators gave up as antiquated back in the 1980s.

The Phillies won’t be fun again anytime soon, and if you can’t bear to watch, it doesn’t mean you’re a bad fan — it means you have a well-developed sense of perspective and better things to do on the last day of summer. Would that we were all so fortunate.

The thing about bad baseball teams, however, is that even they have individual players who are worth getting excited about. This season, Marlon Byrd has quietly put together an impressive campaign, and Chase Utley and Jimmy Rollins have quietly returned to near-prime form, and Ben Revere and Domonic Brown continue to tantalize and frustrate in equal measure. And on Monday, the four Phillies who are most worth getting excited about came together for something special: a combined no-hitter of the Atlanta Braves.

I doubt any player in baseball is as taken for granted as Cole Hamels. Since 2010, only five pitchers have thrown 900 or more innings with 900 or more strikeouts, 300 or fewer walks, and an ERA+ of 120 or better: Felix Hernandez, Cliff Lee, Clayton Kershaw, David Price, and Hamels, who pitches with tremendous elegance and a combination of sneering arrogance and savvy that people would’ve noticed more if he hadn’t shared a rotation with Lee and Roy Halladay for so long. He’s also got a changeup that’s like seeing Star Wars for the first time.

This no-hitter wasn’t peak Hamels, though. His game-opening walk to Jason Heyward ended on a 3-1 fastball that missed so badly it was reasonable to assume that Hamels had hurt himself. In all, he issued five walks and hit a batter. Hamels struck out seven, but so clearly didn’t have his best command that Ryne Sandberg lifted him after six innings and 108 pitches.

It worked out OK, because Jake Diekman and Ken Giles were there to take over. The Phillies deservedly take a lot of heat because their farm system hasn’t produced a quality big league starting pitcher or regular since Hamels and Carlos Ruiz came up in 2006, but in the meantime, they’ve churned out quite a few scary middle relievers, the latest of whom are Diekman, 27, and Giles, 23. Diekman’s a gangly left-handed sidearmer and Giles is a more compact righty who always looks a little like he’s trying to pass a sobriety test. Despite their cosmetic differences, though, both throw in the upper 90s with joke-shop sliders, and they combined to strike out five of the six batters they faced, including Andrelton Simmons, Jason Heyward, and Freddie Freeman.

That paved the way for Jonathan Papelbon. I’ve never been a big fan of Papelbon’s. Something about him has always rubbed me the wrong way, and he takes so long between pitches that a child born when he enters a game would be old enough to play in the majors by the time that game ends. He’s signed to an infuriating contract and, when he pitches, his mouth looks like a butthole. But in terms of results and reliability, no relief pitcher in the past decade has been as close to matching Mariano Rivera without actually being Mariano Rivera.

This was one of the few seven-run leads that Papelbon probably wanted to come in to protect. (Back in 2003, the Astros used Brad Lidge, Octavio Dotel, and Billy Wagner to close out a combined no-hitter that they wound up winning by eight runs.)

Sure enough, Papelbon threw nine pitches, got three outs, and waited for the group hug on the mound.

Baseball is relentlessly weird, because while four interesting and exciting pitchers aren’t enough to make a team interesting or exciting, they can still come together to produce something as rare and as cool as a combined no-hitter. Getting to see that feat on Monday doesn’t diminish the pain of having watched the Phillies for the past two years, or make that pain worth it. But at least it reminds us that we can still smile.