Fight and Flight: Can Perry Jones Be OKC’s Unlikely Savior? 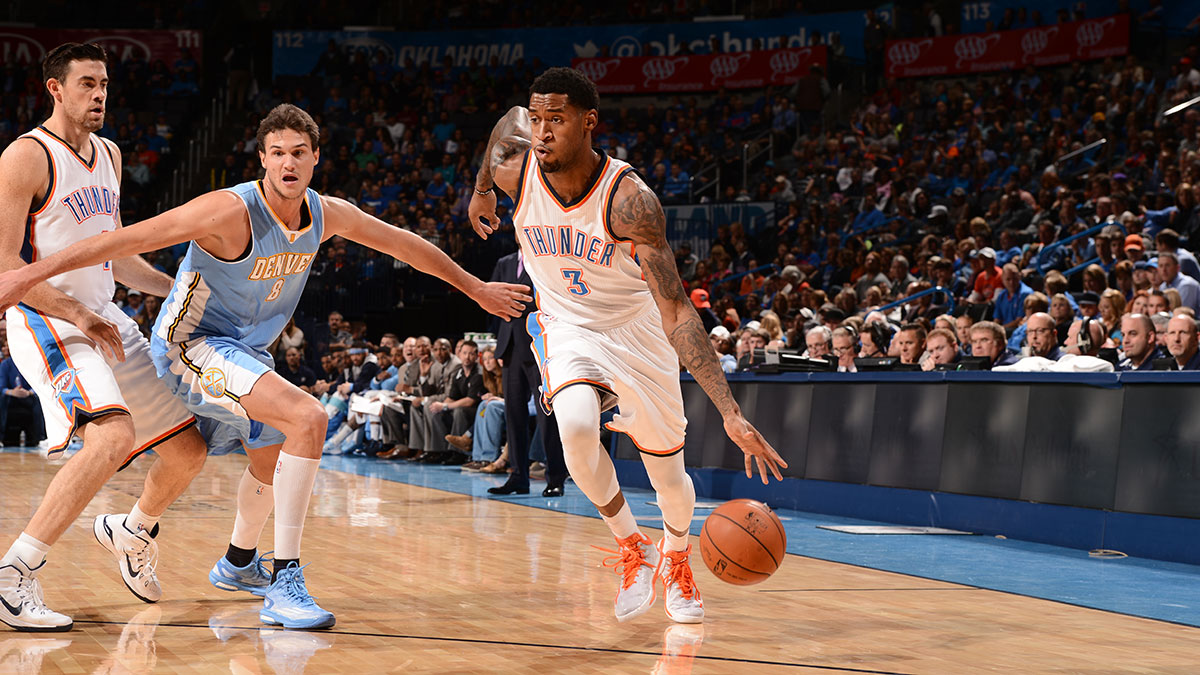 The Oklahoma City Thunder are in the midst of a two-month-long doomsday prep drill. Except, as it turns out, this is not a drill. The stakes are too high, and the margin for error is too slim and getting slimmer still. The reasons for competing haven’t changed, but almost everything else has. Seven different players are injured; Kevin Durant and Russell Westbrook are both out until around December. In only the second game of the season, the Thunder saw the floor beneath them collapse into oblivion. And yet spirits are high — as high as they can be in such ruin. It didn’t take long for the Thunder to find a small silver lining. Perry Jones has become the team’s unlikely savior. A few months ago, he was an afterthought, a player with no guarantee as a rotation player on the team. So then, how did this happen?

Maybe the answer can be found in the moments he looks back at the bench — an unavoidable tic all young athletes have. There’s probably something transformative in looking back at your team for affirmation and seeing as many encased appendages on the sideline as there are available bodies. In the past, those looks were often precursors to a bench sentence. Now he’s staring back at the reason why the team can’t afford to give him a seat.

The early returns are bordering on unbelievable.1 Jones has scored 55 points in the last two games on 54.3 percent shooting, and 46.2 percent from 3. Those 55 points in two games are already a quarter of the way to his 216 points in 62 games last season. He leads the team in points, minutes, in plus-minus, and in net rating. In the 31 minutes the Thunder have sat Jones, they are hemorrhaging points at a rate of 127.8 points per 100 possessions.2

There might not be five other players in the NBA who have a more perfect basketball physique than Perry Jones. Last summer, Durant declared him the best athlete in the league, and meant it. Standing 6 feet 11 inches, it’s hard to imagine many humans in the world his size who can match his foot speed. Most of his offensive maneuvers are rudimentary — his ballhandling is mostly limited to line drives, his footwork on post-ups is passable — but when you’re that tall and blessed with the first step of a point guard, things tend to fall in your favor. Jones got to the free throw line 11 times against the Clippers just by being a step quicker than everyone else.

His size and athleticism make him the perfect utility defender. Last year, he briefly rose to national prominence by raising hell against LeBron James in a nationally televised game against the Heat. So far this season, Jones has guarded Chris Paul and Ty Lawson, players about a foot shorter than him, at the top of the key; he’s defended Blake Griffin in the post; he’s chased Jamal Crawford and Arron Afflalo around screens. He is the Thunder’s de facto backup point guard, logging nearly nine minutes as the team’s primary ball handler.

Jones is doing virtually everything that can possibly be done to keep his team alive in games. For those of us who have seen him consistently fall short of expectations at Duncanville High School and Baylor University, watching this Perry has been a jarring revelation. It’s been a complete on-court personality shift.

By the third quarter of the Clippers game, he was at the center of defensive huddles, being vocal and demonstrative. In the Nuggets game, he was furiously jostling for post position, demanding the ball. On drives, he was Westbrook incarnate, with conscience, but without fear. Who is this guy?  Is this what happens after two years of developing under Durant and Westbrook? Or is this something more primal; the product of being pushed against a wall with no recourse — a fight-or-flight response?

Watching Jones against the Clippers and Nuggets, I started thinking about alter egos in basketball. Do they exist, or are they just a narrative device to propel the mythology of a player? At the end of the 2011 season, Gregg Popovich asked George Hill, then a vital cog off the Spurs bench, to become someone else. He wanted Hill to revert to being the player he was in college at IUPUI, and in high school, where he once scored 49 points in three quarters. He was an insatiable scorer then; “Indiana George,” they called him. Pop wanted him to run far away from the player he had so far been for the Spurs: an Alex Smith–esque caretaker at point guard. Indiana George made the occasional appearance, but whether it’s the pull of nature or nurture, or the likely combination of both, the muted version of Hill remains his default wiring.

In his two years at Baylor, and during his first two seasons with the Thunder, Jones was docile and regularly out of sorts. He was a top-10 recruit heading into college, and as far as talent went, was a top-five NBA prospect. But teams weren’t convinced Jones had the desire or personality to be great, and his inconsistent play didn’t inspire any confidence, either. A medical red flag on his knees just before the 2012 NBA draft made the decision much easier for front offices — he plummeted to the 28th overall pick. In interviews, he’d say all the right things about his lack of assertiveness on the floor, but any changes he’d promise seldom materialized. These days, it’s more or less the same — he’s exceedingly polite, and still very much a mouthpiece for team rhetoric, emphasizing the team’s family dynamic on numerous occasions. But when he has produced as well as he has, it’s a lot harder to be cynical about it. Standing in the media scrum last Thursday night, I wondered if Perry himself realized the impact of what he’d done.

“My teammates were in my head, especially Kevin [Durant],” Jones said. “He was telling me to be aggressive and telling me that the team is going to need somebody to step up and be aggressive. That’s all I tried to do.” That could’ve been something he said in 2011, but context changes a few things — it sure felt like he understood the weight of his newfound responsibilities.

Look, we’ve all seen enough of these surprise runs to know that it won’t last forever, but that was never the point with this team. Reggie Jackson and Jeremy Lamb are on the way; Anthony Morrow and the rest of the cavalry are soon to follow. There won’t be any complaints from Jones, who, in his words, understands that they’re just “holding down the fort” until reinforcements arrive. Oklahoma City’s body count is a farce, and the team has had to live with the cruel humor. “It’s not funny at all,” said Nick Collison, “but you almost have to laugh about it because there’s so many guys.”

So then it must have been some kind of cathartic moment for the bench when, with 1:46 remaining in the game against the Nuggets and 2.2 seconds on the shot clock, with the Thunder clinging to a four-point lead, Jones caught the inbounds pass, turned inward over his right shoulder, elevated before making a complete rotation, and drilled a 3-pointer over the outstretched arms of Arron Afflalo to ice the game.

“That was a good feeling, especially looking at the bench — how wild they were getting,” Jones said after the game. “It was a good shot. I was going to shoot it. I had my mind set on shooting it. I’m just glad I made it.”

He ran back in glee, looking at the bench, again, as young players do. But this time, he did so as a potential star-in-waiting. He wasn’t dodging any messages from the bench. Rather, he was sending a message of his own: We’ll be fine.