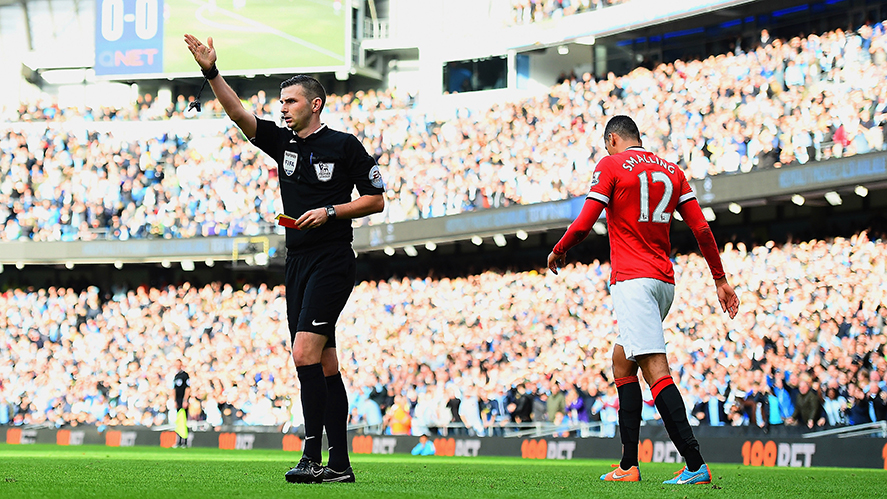 Don’t get sent off. Getting sent off is bad. You’d think it’d be obvious. You’d think players would understand just how important staying on the field is. You’d think that in the unlikely event it did happen, it would be the result of some extreme circumstance — like a defender caught suddenly in a no-win situation, or a dubious call by a referee. Sometimes stuff happens that’s out of a player’s control. But, when stuff is reasonably in a player’s control, there should be one golden rule: Don’t. Get. Sent. Off.

This rule apparently needs constant reinforcement. Louis van Gaal, ironically enough, focused on this rule in training, before the Manchester derby saying, “”We don’t want a red card because when it is 11 versus 10 it shall be very difficult to win this game so (talking about that) has also been a part of our preparation.”

Maybe Chris Smalling was out sick that session.

Smalling’s sending-off was inane precisely because it was avoidable. He picked up a cheap yellow for interfering with Joe Hart as the City keeper punted the ball down the field, and then eight minutes later he did this.

That’s as bookable as it gets. The match was basically over — though it annoyingly took 25 minutes longer for a goal to go in, thanks to referee Michael Oliver refusing to call a few obvious penalties in City’s favor. Of the two Smalling yellows, it’s easier to chastise the United defender for the first than for the second. The foul on Hart was avoidable, but — while egregious — it at least occurred during the run of play. Impeding Hart’s distribution is one of those things that falls under the dark arts of soccer. If the defender comes up for a set piece, and gets caught upfield while a keeper collects, and prepares to boot it long, it’s not out of the question for the defender to make himself a bit of a nuisance. It’d be nice if Smalling had been a little subtler about it, but picking up a cheap yellow to slow down an impending attack is not the end of the world.

Cynical play worthy of a yellow is something every team practices, whether it’s time-wasting, bringing a player down to prevent a counterattack, or kicking the ball away before an opponent can take a free kick. The key to that kind of behavior, though, is that whoever picks up the yellow can’t pick up another one.

This, in itself, is a skill for defenders. It’s like playing a basketball game in foul trouble, only you don’t get to ride the bench for a while. Some players can do it, some players can’t. Chris Smalling failed spectacularly.

Chris Smalling’s dismissal wasn’t even the most destructive one that happened in a Premier League game on Sunday. Here’s a tip for professional soccer players the world over: While having a disagreement with a fellow professional ball kicker wearing an opposing uniform, refrain from touching said individual about the head in any way at all. It’s not really all that much to ask. Do not do what Christian Benteke did.

That’s a red. That’s why Erik Lamela looks like a kid on Christmas morning. He knows that if the ref saw it, Benteke is gone and Spurs will have a man-advantage.

Annoyingly, not-the-face is not in the rulebook, because the actual FIFA rulebook stinks. The rulebook simply says that players get straight reds for violent conduct, whatever the referee construes violent conduct to be. Over the years, violent conduct has meant a lot of things, but putting hands on another player’s head has always qualified. That’s the main reason players flop to comically extreme levels when another player’s hand comes within a country mile of their face. Everybody knows the rule, even if it is literally unwritten.

This wasn’t Benteke’s first dance with red. Two seasons ago, against Chelsea, he got himself red-carded for kicking John Terry in the stomach. Benteke’s red card against Tottenham almost certainly cost Villa three points, and the striker now faces a three-game suspension. That’s a deceptively large chunk of the season for Villa to be without their best attacking player. It’s the equivalent of a 13-game suspension in baseball or a six-and-a-half-game suspension in basketball. It’s not trivial, and Aston Villa can’t afford his absence.

After an incredibly fortuitous start, Sunday was the Midlands club’s sixth loss in a row. They’re now in 15th, just two points above the relegation zone. At the end of the season, when they are likely facing a battle for Premier League survival, how valuable would these three points have been? How valuable would Benteke, a pure goal scorer on a team that struggles to put the ball in the net, be over the next three games against West Ham, Southampton, and Burnley? Villa could pay the ultimate price, all because Benteke couldn’t resist putting his hands on Ryan Mason’s mug.

There’s so much that happens on a soccer field that’s out of a player’s control. Balls bounce weirdly, gravity plays tricks, referees pay deference to the goddess of whimsy, and the players bear the brunt. But on Sunday, for Chris Smalling and Christian Benteke, the thing that was out of control was themselves. It cost them points for their teams. And, in a very tightly bunched year in the Premier League,  when the season ends it might cost them even more than that.

Fight and Flight: Can Perry Jones Be OKC's Unlikely Savior?

Pain and Progress at Ole Miss: 48 Hours in the Grove