Paris Is Rising: The Elephant and the 19 Mice of French Football 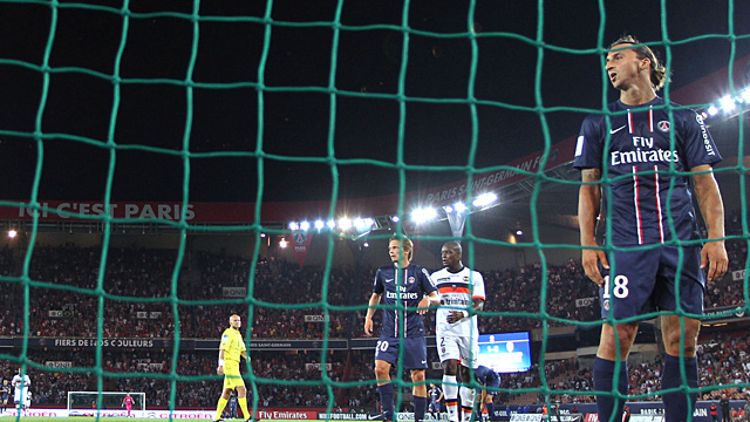 There is an elephant and 19 mice in French football. L’Equipe, France’s largest sports daily, was the one to coin that phrase but it seems players and managers agree. In a recent survey 85 percent of players picked the same team to win Ligue 1 this season. In another poll 100 percent of the managers agreed. It is a one-horse race for the title in France this year and that horse, of course, is Paris Saint-Germain, the nouveau-riche team from the capital threatening to gatecrash the party of Europe’s elite clubs. It is a foregone conclusion throughout France that PSG will win the league, so the focus is whether they will mount a serious challenge on the Champions League.

Just this week the club reportedly paid 45 million Euros to secure the services of unproven Brazilian teenager Lucas Moura, making it the largest transfer in the history of Brazilian football. What PSG are paying for is his potential and with their money they can afford to roll the dice. It is perhaps the Lucas transfer that shows the extent of just how far PSG have come. True, they captured both Zlatan Ibrahimovic and Thiago Silva earlier this summer. But those transfers were born out of AC Milan’s financial troubles, and few people were willing to match the 14 million–Euro annual net salary PSG offered Ibrahimovic.

With Lucas, both Manchester United and Inter Milan, teams who have featured in four of the last five Champions League finals, were interested in the player. Yet it was PSG who walked away with the young Brazilian. “When someone is paying 45 million for a 19-year-old boy you have to say the game’s gone mad,” said Manchester United manager Sir Alex Ferguson.

What the Lucas fee actually proves is that PSG are not hesitant to throw their financial muscle around, but, equally important, it shows that young players like Lucas are buying into the PSG project. It’s one thing to get big stars who are looking for their last contract, but another thing entirely when a club of PSG’s stature can attract future stars of the game — players like Lucas, the silky Argentine Javier Pastore, and the Italian teenager Marco Verratti, dubbed little Pirlo in Italy.

There are varying opinions on PSG’s access to and use of the money it has received from Qatar. None other than French president François Hollande has said “Frankly this is a time to have limits. The salaries are manifestly too high.” France’s budget minister, Jerôme Cahuzac, was less diplomatic. “At a time when everyone around the world is tightening their belts, these figures are not impressive, they are indecent,” he said in an interview with Europe1 radio. Former sports minister Roselyne Bachelot echoed Cahuzac and Hollande when she said “These wages make me indignant and almost disgust me. These wages are a reflection of everything that is deplorable about football.” This is more than just politicians pandering to the electorate — Hollande may soon add some bite to his bark. A large part of his campaign promise was to implement a 75 percent tax on all salaries over a million Euros, and he has shown no sign of backing off from that promise.

Lost amid all the talk surrounding PSG’s money is that there are still 37 matches to be played this season and PSG will have to win the title on the field. They drew their opening match with Lorient, 2-2, needing two goals from Ibra to rescue a point.

The team looks strong on paper, but there are real problems heading into the season. As you might imagine, not everyone in the dressing room is happy. When a team stockpiles talent the way PSG has, some quality players find themselves stuck on the bench. Nene, the Brazilian winger, who was joint top scorer in Ligue 1 last season, stormed out of the stadium last Saturday after being substituted at halftime against Barcelona. There is a question in the central defense about who will start next to Thiago Silva. Mamadou Sakho is a player who came through the PSG system and was club captain under former coach Antoine Kambouaré, but Sakho has seen his playing time limited under new manager Carlo Ancelotti. Sakho is a fan favorite and a symbol of the old PSG, while Alex is seen as the new regime ushering out the old and putting a new gloss on the club. Politics aside, Sakho looks like the one who should be the first choice when the season starts. In attack, everyone expects Ibrahimovic to do what he always does, score goals and help PSG win the title. The midfield looks good enough to manage the domestic campaign, but the trio of Thiago Motta, Pastore, and Mohamed Sissoko may find it difficult in the Champions League.

I plan to attend all of PSG’s home matches, a few important road games, and spend some time watching with local Parisians in bars. Like many Americans who spend the fall and winter watching Barclays Premier League matches before sunrise on the weekends, I’ve often wondered what it would be like to actually be in the stadium. Your connection to a club can only be so strong if you only watch them from your living room and they are thousands of miles away across an ocean. You can fall in love with an adopted team and cheer them on, but nothing compares to the camaraderie of attending matches and riding the emotional wave of being a fan with tens of thousands of other people. This was exactly what happened to me when I visited the Emirates Stadium two years ago and was on hand to watch Arsenal draw 2-2 with Barcelona in the Champions League and then win a nail-biting match against Wolves in which Nicklas Bendtner scored a stoppage time winner. Those two matches were more than anything I’d done as an Arsenal fan in the previous eight years. Within four days I’d learned all the club’s chants and was part of a full “Come on Arsenal” chorus that roared the team on before Bendtner scored his winner. Even the Chelsea fan who took me to the match was swept up in the excitement.

PSG are threatening to turn Ligue 1 into a one-team league. Traditional rivals Marseille are in decline. Defending champions Montpellier lost their top scorer from last season to Arsenal and Lille no longer have Eden Hazard. If PSG does become a flat track bully, it is not necessarily a bad thing. Interest in Dutch football peaked when Ajax were head and shoulders above everyone else in the Eredivisie. I spent much of the ’80s on my father’s lap watching tape-delayed Liverpool matches when they were by far the best team in England. Manchester United’s dominance in the ’90s has a lot to do with why the Premier League is as popular as it is today. If PSG dominates Ligue 1 and couple that with some serious runs in Europe interest in Ligue 1 will grow and so will the price of television rights, which will increase the earnings of other clubs. PSG might be the elephant of France towering over 19 mice, but as anyone who watched the Disney classic Dumbo can attest, mice have been known to cause elephants a scare from time to time.

Filed Under: Paris Is Rising

Calling in the Cavalry: The Curious Case of the Modern Pentathlon