Calling in the Cavalry: The Curious Case of the Modern Pentathlon 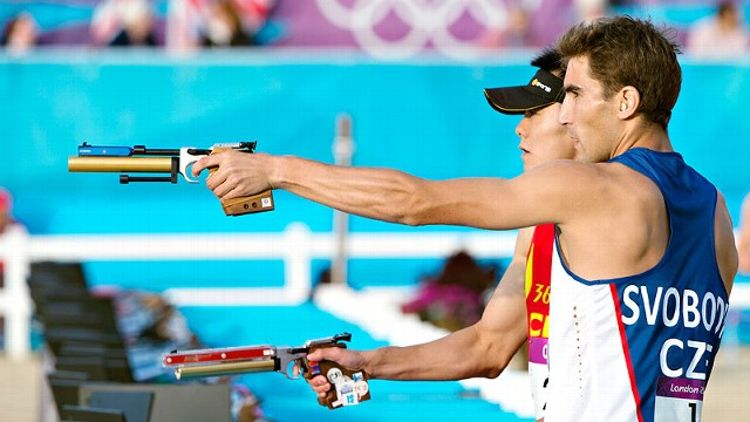 Sunday 25 October 1914: Woken up during the night with orders — probable advance … They treat us as if we were Infantry always forgetting that we have not got the gun powder which Infantry have.

As the Olympics drew to a close, there was a lot of talk about greatness. There was a lot of talk about Michael Phelps, Usain Bolt, Ashton Eaton, the USA women’s soccer team, and medal standings. There was no talk about David Svoboda on NBC. But according to Olympic legend, or at least according to NBC’s website, the modern pentathlon winner was supposed to be the greatest of all, the representative of moral as well as physical courage: the cavalry officer.

In the teeny-tiny chance you missed it: On Saturday, Svoboda fenced his competitors, swam 200 meters in a pool, rode an “unfamiliar” horse across jumps decorated with models of Stonehenge and Big Ben, ran three kilometers, and shot a laser gun. Just like a cavalry officer would do if he were caught behind enemy lines, see? It is a really bizarre spectacle, especially the riding bit, since the competitors are given only 20 minutes to form intimate connections with their horses, and that can lead to some disasters. Svoboda, though, looked nerveless. He has the kind of handsome, chiseled, vaguely programmed look of a future Bourne series star. It was easy to imagine Pierre de Coubertin, who invented the modern pentathlon for the 1912 Olympics, shaking his hand.

1912 was a good year for the cavalry — a high point, really, just before the slaughter started.

Sunday 25 October 1914: Went out shooting from 12-1, missed two pheasants, the gunnery was rotten. There are a lot of partridges, hares, and pheasants about and if one only had a dog one would not do so badly. They are still shelling Messines … Just heard a story about the German attack on 1st Corps: they made five attacks, each attack about a Regiment advanced in close order singing Die Wacht am Rhein and we of course practically annihilated them — they are fine men these Germans and fine fighters … as a nation they have a fine patriotism to drive them on in this way.

The cavalry has come to represent the kind of hopeless romanticism and stupidity of the Great War: So many illusions, so many deaths, so much horse meat. But it’s too easy to mock De Coubertin, or those British cavalry officers, for being sentimental. Last year a giant puppet horse took over Broadway in a play inspired by a children’s book, and then Spielberg turned it into a Major Motion Picture, and people flocked to see it. I guess it was supposed to be a movie about the horrors of war, or the power of love, and the blindness of the men who sent the horses and riders to slaughter, but I suspect that if Sir Archibald Home had lived to see War Horse, he would have swelled with admiration.

Monday 28 February 1916: As regards the Cavalry the Corps formation has been done away with, so we are all out of jobs … I am heartbroken over their decision. We have all worked hard for this old Corps and hoped one day it would be used in open warfare, but that of course is now no longer possible.

The modern cavalry now drive tanks. The modern pentathlon has persisted. It is on the chopping block, though, after this Olympics. In an effort to make the sport more hospitable to viewers, officials have tried many things. They’ve collapsed all the events into one day. They’ve combined the fourth and fifth events, the shooting and the run. They’ve switched from rifles to laser guns. When the women’s event was over on Sunday, when the last competitor to compete in the 2012 Games crossed the finish line, the pentathlon advocates declared it a great success. But who knows whether we’ll see it in Rio. Golf is coming to the Olympics.

Thursday 6 November 1916: However unpleasant it is to think about, Napoleon’s fifth element ‘mud’ is now victorious … Guns cannot be moved at all. Men fall into shell holes full of liquid mud and are drowned — horses stick in the mud and have to be shot. As regards the wounded, it is terrible … People can have no conception of what this warfare means. We shall win through however in time; this is the one consolation.

The lone American contestant in the men’s competition, Dennis Bowsher, was a decent high school swimmer who switched to modern pentathlon after seeing a recruitment flier at a swim meet. He almost immediately became the country’s most promising modern pentathlete. As it happens, Bowsher is a member of the United States Army World Class Athlete Program. His training is considered active duty.

Thursday December 1914: Now I am going to be disloyal — I expected great things of [the King’s] visit … To the men he is a real King, their King and they expect many things … I pictured a scene which was to live for a long time in these modern days of callousness and selfishness: a real thing in a modern world of sham. But the picture never matured. On the side of the men the cheers were real, given to their King — he walked up through the line, hardly waiting for Brigadiers to be presented to him — there was no picture, but the framing was there, real live gold.

The Britain that hosted the Olympics was not the Britain of 1912. It was the Britain of the Beatles and Austin Powers and the Spice Girls, of phantasmagoric floats featuring Burberry, and of the farting gags of Mr. Bean. The royals were there, in the swimming hall and at the gymnastics events, smiling and approachable. As for Bowsher, his horse refused the first jump and then trampled another. He finished 30th.

A Korean competitor, Woojin Hwang, had much worse luck — his horse began to buck and rear, standing tall on its hind legs before toppling and landing on top of Woojin. He got up, limped a little, remounted, rode on. He was the real thing.

It was a great Olympics.

Paris Is Rising: The Elephant and the 19 Mice of French Football