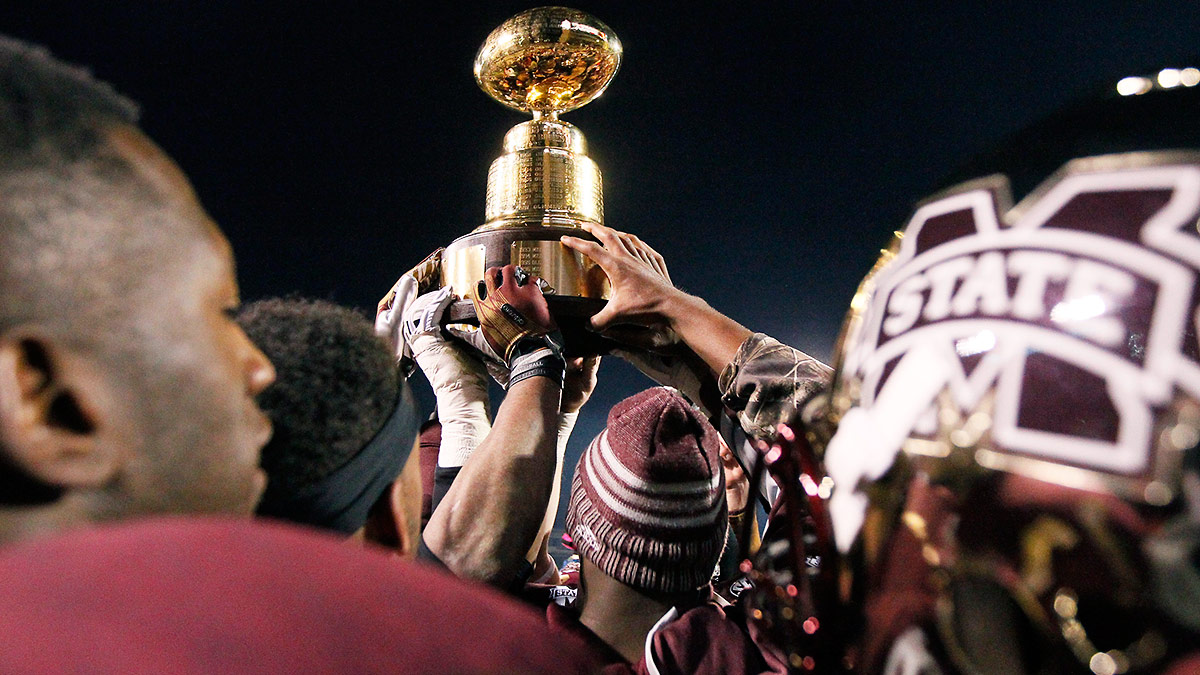 Ole Miss began playing football in 1893. Mississippi State — then called Mississippi A&M — fielded its first team two years later. Although natural rivals located just 93 miles apart, they could not agree to play one another until 1901.

Truth is, the two have never agreed on much of anything. When they finally got together in Starkville on October 28, 1901, kickoff was delayed nearly an hour, naturally by a dispute. Ole Miss accused A&M of playing non-students. A&M vehemently disagreed. And since there was no NCAA to rule over such matters at the time, they played. Due to the late start, the game was called for darkness midway through the second half. A&M whipped Ole Miss, 17-0.

The A&M school newspaper accused the Ole Miss boys of “dirty play when the referee was not looking.” The Ole Miss school magazine said A&M’s complaints came “from one who has never indulged in any exercise more violent than the milking of a patient cow.”

A century and 13 years later, the bickering continues.

Down here in Mississippi, we call this conflict the Egg Bowl. Ole Miss and State have fought in snow, in ankle-deep water, in gale-force winds, and through fog so thick spectators could scarcely distinguish between the guys in maroon and white and the ones in red and blue. They’ve played mostly in Starkville, in Oxford, and in Jackson, but also in Columbus, Tupelo, Clarksdale, and Greenwood. Most often, they’ve played in virtual anonymity outside the Magnolia State.

That will change this Saturday, two days after Thanksgiving, when State and Ole Miss will square off in Oxford for much higher stakes than usual and with much more of the nation’s interest. With a win, the Bulldogs will remain in national title contention, positioned to represent the West in the SEC championship game if Alabama stumbles against Auburn, and to stay in the mix for one of the four spots in the inaugural playoff regardless of what happens in Tuscaloosa. Mississippians will have much for which to be thankful this holiday, besides leftover turkey and dressing. They can be thankful for this most memorable of autumns.

The Iron Bowl, known for its intensity, has nothing on the Egg Bowl when it comes to unfiltered contempt and hatred. This is a series marked by intermittent brawls, including one 1997 pregame melee. Just when the players should have been stretching and doing jumping jacks, all hell broke loose. Helmets were wielded. The Mississippi Highway Patrol watched — amused, for a while — then hustled into action.

Had C.R. “Dudy” Noble been watching, he might have smiled. Noble knew the rivalry’s bitterness from both sides. After playing at State, he coached Ole Miss in 1917 and 1918 before going back to State. Noble became a fixture and legend as State’s long-time athletic director. He loathed Ole Miss. He once told a sports writer, “I already know what hell is like. I once coached at Ole Miss.”

Today, State coach Dan Mullen will not even utter the words “Ole Miss.” He calls his archrival “the school up north.” Ole Miss fans often derisively refer to State as Cow College or Moo U.

Even the rivalry game trophy — the Golden Egg — was created because of strife. In 1926, Ole Miss won at Starkville, 7-6, snapping a 13-game State win streak. When Ole Miss students swarmed the field intent on taking down the goalposts, State students defended their territory, some with wooden chairs they’d splintered over the invaders’ heads. That brawl led to the introduction of the Golden Egg Trophy, which would be the winners’ reward instead of the goalposts.

But amid the bickering and the brawls, the Rebs and Dogs have played some interesting and, at times, outstanding football.

Interesting? In 1907, the Rebels and the Bulldogs sloshed onto the field at the State Fairgrounds in Jackson after several days of hard rain. Much of the field was underwater, some of it knee-deep according to newspaper reports. The State men proved better mudders, winning 15-0, in part because Ole Miss coach Frank Mason provided an urn of coffee spiked with whiskey to warm his players.

When asked about his team’s travel plans afterward, Mason said the team would leave for Oxford that night, but that he would not. And, he added, “I hope I never see them again.” 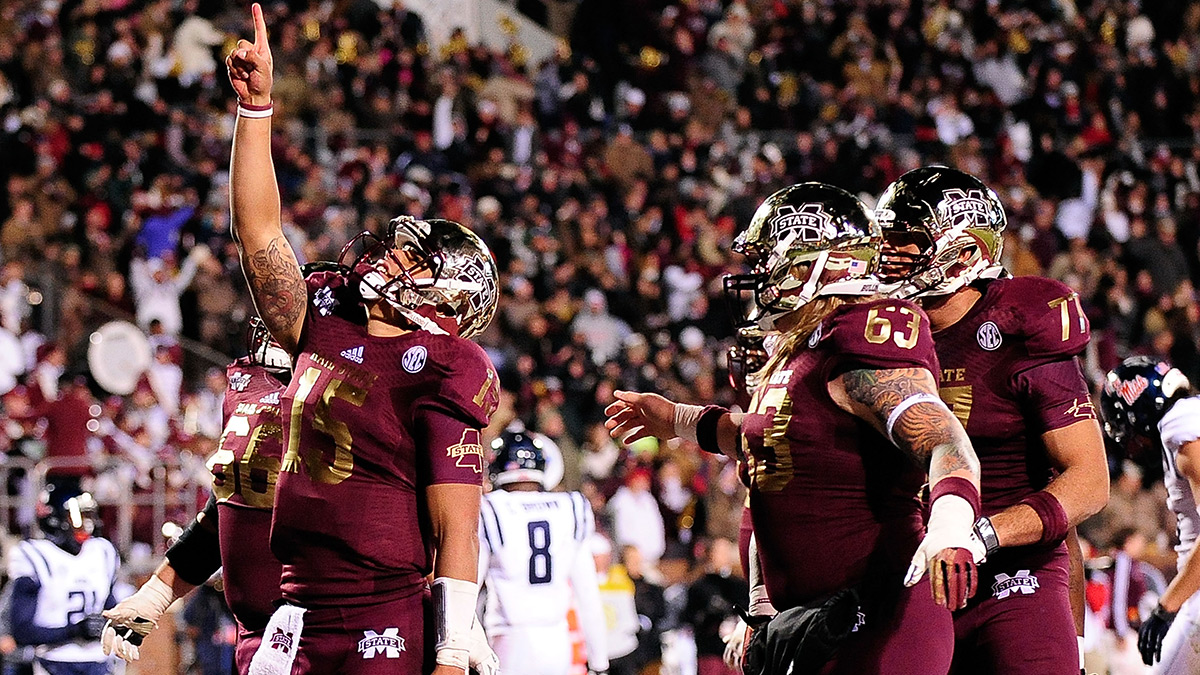 In 1941, State and Ole Miss played for the SEC championship. Mehre coached the Rebels. McKeen guided the Bulldogs. State won 6-0 to claim the only outright SEC title in Bulldog history.

William Winter, now 91, covered that game as an Ole Miss student reporter. Almost four decades later he would become perhaps Mississippi’s most progressive governor. Winter can tell you what happened almost play for play, including the long Ole Miss touchdown run called back. When an interviewer expressed amazement at Winter’s keen memory for something that happened 73 years ago, he said, “Well, you have to understand it was the most important thing in my life at the time.”

It is that way for many Mississippians. The 1941 game remains the only time State and Ole Miss have ever played when both teams had a shot at the SEC title. Often, only bragging rights have been at stake. That’s enough. One such time was 1978. Steve Sloan’s first Ole Miss team limped into the game with a 4-6 record. Bob Tyler’s last State team was 6-4 and going nowhere.

The late Tom Patterson, sports editor of The Clarion-Ledger and Jackson Daily News, had assembled a staff of talented writers. What he lacked was a big event with which to showcase all that talent at once. None of the Mississippi teams were playing well enough to secure a bowl bid. So Patterson decided to create his own showcase: the Egg Bowl. Patterson covered the Rebels’ 27-7 victory with 12 writers, six photographers, and a 16-page special section that won national awards.

More important, the name stuck. Any copy editor will tell you “Egg Bowl” fits a headline far more easily than “Battle for the Golden Egg.”

Truth is, though, State and Ole Miss supporters loved to loathe one another before football factored in. In the beginning, this was a rivalry of class, which predates the creation of Mississippi State. Many considered Ole Miss, established in 1848, a last bastion of post–Civil War southern aristocracy. Noted historian David Sansing wrote: “From the ruins of the old regime, a New South and a New Mississippi emerged. The small farmers and laborers in the northeast hills and the Piney Woods finally wrestled political control from the Delta. The gentry’s hegemony was broken.

“ … The dirt farmers and common laborers, called rednecks, accused Ole Miss of pampering sons of the gentry and neglecting the working class.”

Out of that mistrust, what is now Mississippi State opened its doors in 1880. Immediately there were hard feelings. Disputes about political favoritism raged. A&M resented Ole Miss for its favored status and larger budget.

In 1901, football took the rivalry to another level, providing physical combat, the next best thing to a fight — though as we know, a few of those have broken out through the years as well.

History has taught Mississippians — and Las Vegas oddsmakers — to expect the unexpected in the Egg Bowl. The underdog often wins. Perhaps that’s why Saturday’s game opened as a pick-’em in Vegas. This is one of those games where you can throw out the records (and all too often one or both would have loved to do just that). Despite what has occurred over the past few weeks, when Ole Miss went from national title front-runner to three-loss also-ran, a Rebels victory on Saturday would not shock.

But even if that happens, Mississippi State athletic director Scott Stricklin could likely find one silver lining.

“We and Ole Miss have achieved at least one huge accomplishment this season,” Stricklin told me recently. “All too often, the national media often has lumped us together or, worse, gotten us mixed up. I think, if nothing else, the rest of the nation now can differentiate between Ole Miss and Mississippi State. We are, after all, quite different.”

Rick Cleveland (@rick_cleveland), a sports columnist for more than 40 years in Mississippi, writes a syndicated column and is the executive director of the Mississippi Sports Hall of Fame and Museum.