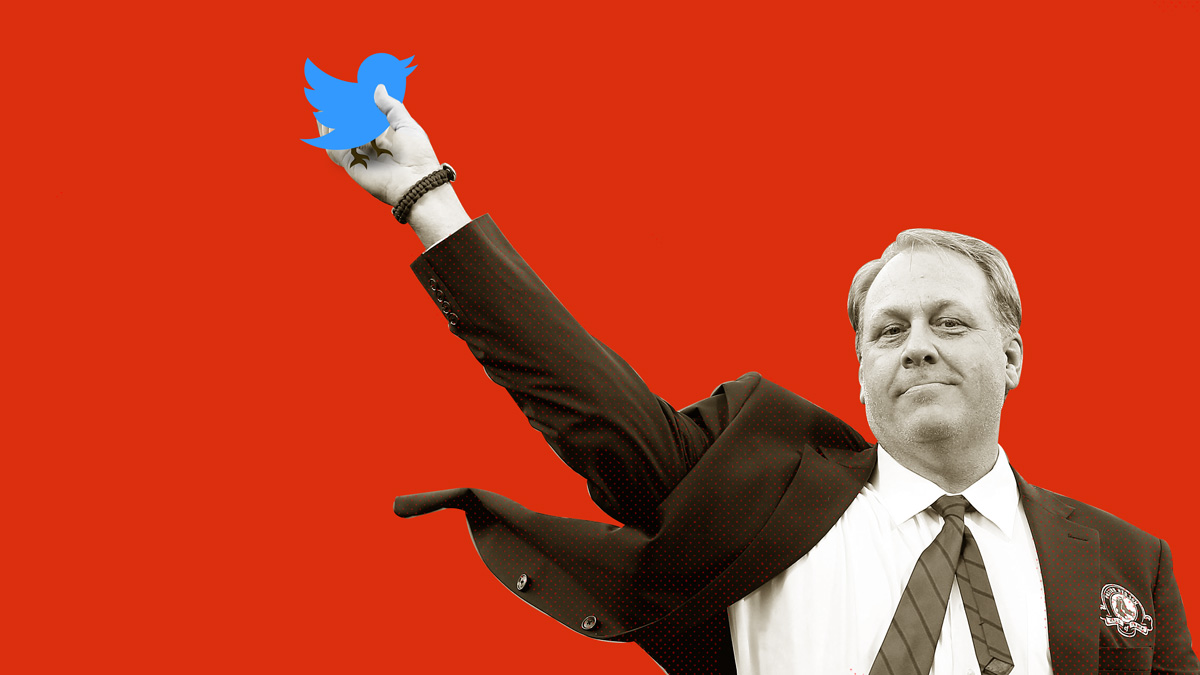 If social media is generally drugs, then Twitter is heroin. The first few times you do it, it’s a tremendous rush, like wild horses running up your spine that turn to flowers inside your brain. But, sooner or later, you end up sprawled in a cold-water tenement, your reputation dead beside you with a spike in its arm. People mourn your reputation, and they keen loudly at its wake. Remember, they say, what he was like before he got into the hard stuff?

I am rather a stickler for this. I don’t believe that “What Everyone’s Saying on Social Media” is either a news story in and of itself or a legitimate way to sample public opinion on a real news story. I don’t believe that @HoseMonkey’s stance on the state of the Knicks, or the state of the Republic, needs to be shared with the world, and I think the world should have better things to do than care about it, too. Bear in mind, I am not a Sorkinesque web-o-phobe. I make almost my entire living on the Internet, and I know a lot of people who tweet a lot of things and who nevertheless remain fairly normal human beings. But based on my limited time as something of an addict, Twitter’s risk-reward ratio approaches that of uncut Mexican brown. And, as any of my many editors will tell you, I can’t write anything in 140 characters or less, including, occasionally, my byline.1

Which brings us to the recent events surrounding Curt Schilling, his daughter, an incredible exaltation of atavistic morons, and Twitter.

Nobody has had more fun mocking Schilling and his childlike devotion to wearing Army Man clothes than I have. However, the one thing he’s always been on top of, unusual as it is in a ballplayer of his generation, is social media. He knows how to keep a blog, a skill of which many actual reporters are hopelessly bereft, and he’s more active on Twitter than I dare to be. So when his daughter was accepted to Salve Regina University in Rhode Island, Schilling tweeted out his pride, because that’s what you do when you’re not as completely freaking terrified of Twitter as I am.

There was an eruption of vile sexual tweets regarding Gabby Schilling that have to be read to be believed, which means that all the fastidious old media who declined to publish them gave you only half the story — and, in doing so, declined to provide the proper context to what Schilling did in response. Here, for example, from Schilling’s blog, is the work of some budding Oscar Wildes.

My first thought was, Holy hell, who in the hell thinks of stuff like that? More to the point, what kind of human algae has it jump to his mind so quickly? And who are the enabling junkies who “favorite” or retweet this sludge? And then Schilling decided that we should all find out. So he tracked down some of the worst offenders. Old Sports Guru there got suspended, and Hollywood lost his job with the Yankees.

Schilling has been widely applauded for what he did in defense of his daughter, and rightly so. What criticism there has been of what he did has come mainly from the Twitter Means I Can Say What I Want crowd. These are the people who apparently believe that, just because Schilling tweeted something about his daughter, he should have been prepared for people explaining how they would like to rape her with a baseball bat.

It has been quite a few years for dangerous misogyny in cyberspace. A woman named Zoe Quinn was threatened and harassed in what became known as the #GamerGate controversy. Some female writers have talked about leaving the business altogether because of online abuse. There already is an expanding series of horror stories about young girls whom cyberbullying has driven to suicide. The hell of this episode is that, apparently, Schilling didn’t notice what a poisonous swamp Twitter can be for women until the toxins came washing up onto his front porch.

Schilling has been accused of “vigilante justice,” which just ain’t so. As it is generally defined through history, vigilante justice involves committing a crime in retribution for another crime, because you don’t believe the formal institutions of society and government are adequate to exact the judgment (or the vengeance) that is your right — or because you’ve convinced yourself and a lot of your friends they aren’t. It has a brutal history as an extraconstitutional means of law enforcement, and an even more brutal history as a means of social control. Anyway, that’s not what Schilling did here. What he did was use the tools and customs of the Internet to swing back at people who had used those same tools and customs and traditions to traduce and troll his daughter. This was, by the laws of the wild kingdom that is the Internet, a perfectly fair fight. He played by the new rules. He, like so many of us, is aware of all Internet traditions, and he won on all cards.

A friend of mine and I have this running gag. Whenever an athlete does something stupid online, or whenever a coach goes so ballistic on the sideline that he winds up being shared on YouTube a couple thousand times, or whenever an owner gets pulled over with half a CVS outlet and 29 Gs in his car, and the story has been chewed into an unidentifiable lump on every medium of communication known to (allegedly) civilized humankind, my friend and I will have a good laugh, and then one of us will say:

“There’s another problem that Connie Mack didn’t have.”

Acceleration is the modern curse, at least in this regard. The words and thoughts, and the thoughtless words, go out so fast and so far that they outpace shame, at least in the first two to three hours. After that, it’s too late. (There was the woman who tweeted an ill-advised remark about going to Africa and got on a plane, only to discover once she landed that her life was ruined.) Remember that great scene at the end of A Face in the Crowd, when Patricia Neal turns on the studio microphone so that the contempt Andy Griffith’s Lonesome Rhodes feels for the bumpkins in his audience goes out over the air, demolishing Rhodes’s career? Well, anybody can do that to themselves now, and in an instant.

This is why Twitter is heroin and why most people should not get involved with it. Alas for us, athletes have taken to it with a vengeance, and occasionally for vengeance as well. Examples abound. There are athletes for whom Twitter seems to be an outlet for their unreconstructed id. Professional athletes are not any more resistant to the siren call of the ill-timed tweet. Three years ago, Amar’e Stoudemire got fined $50,000 for tweeting an antigay slur, and former Kansas City running back Larry Johnson got in even bigger trouble for a leaked Twitter direct message.

As has been the case since the dawn of time, the management side of professional sports was slow to catch on, and then completely panicked as it tried to catch up. Antonio Cromartie once was fined a preposterous $2,500 for tweeting about how bad the food was at the San Diego Chargers training camp. When technology and sports first collide, there’s usually a lot of detritus left behind.

(This is true not only of athletes, but of folks who work at websites such as this as well. And this has been your brief moment of objective journalism. We return you now to our regularly scheduled snark, already in progress.)

Of course, the upside is that Twitter is a straight shot right to the ego. Soccer star Cristiano Ronaldo has north of 34 million followers. Athletes use it to create marketing opportunities, burnish their brands, and, oh yes, get in closer touch with the fans without those scrimey bastards in the press filtering their remarks — and if you believe that one, I am taking bids on eBay for this lovely bridge that I own in Brooklyn.

At the moment, it seems that both sides are at a loss. Many athletes seem very unaware of all Internet traditions, including the most basic one: If it’s on the Internet, everybody can read it. Meanwhile, management seems to be completely terrified by the notion that The Almighty Brand can be damaged by some athlete’s unique gift for metaphor. The solution, of course, is time. We are raising a generation of incredibly cyber-literate children. When that generation produces its athletes, those athletes will be as comfortable online as Don Meredith was on television, or as Dizzy Dean was on the radio. For the rest of us, well, there’s the example of Curt Schilling, who taught himself the way through the wild kingdom and did so well enough to defend his daughter’s honor with a clean knockout. However, even Curt can make a misstep. I mean, if you’re on a mission to civilize the Internet, it’s probably best that you don’t link to a pundit who said recently that college women who claim to have been raped “ … are just trying to get attention.” If I tweeted, I might OD on that alone.

Remember, It Can Always Get Worse: On Yu Darvish, the Snakebit Rangers, and the Nature of Baseball Suffering