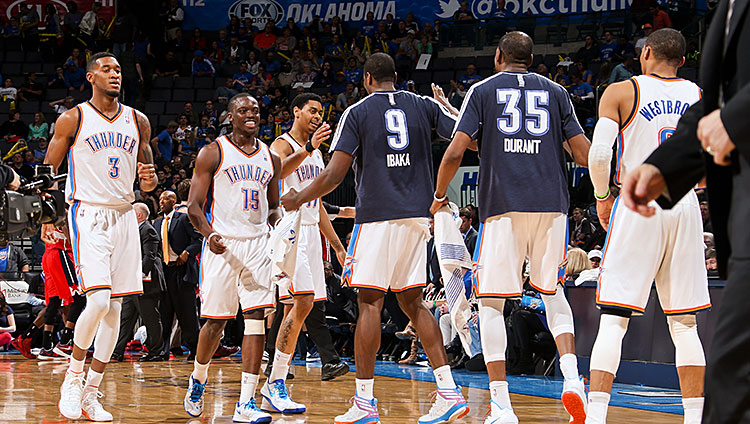 We’re only days away from All-Star Weekend, and surprise, surprise, the Thunder will head into the break with the best record in the Western Conference. This season will probably be known as the Year of Kevin Durant, and one might be willing to bet Durant and four sheets of paper with his four best nicknames scribbled on it could be able to win a game against the Sixers’ starting lineup. Durant will continue to steal the headlines, but the most fascinating story line in Oklahoma City has been how quickly the team’s foundation has been fortified, even in the absence of cocaptain Russell Westbrook. The third wave of Thunder talent is rising fast, and they’ve become the secret conductors of what might end up being the team’s best season ever. 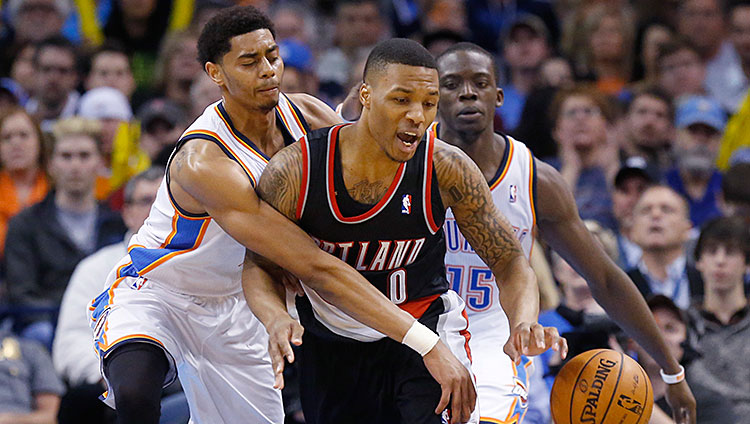 Here’s something I haven’t been able to shake this season: the notion that Reggie Jackson and Jeremy Lamb are somehow intertwined, that they belong on the court together. Collectively, they span 14 feet across. Their arms were meant for humans much larger, but were gifted to them by the basketball gods regardless. They form a balanced attack: Jackson, the slasher; Lamb, the marksman. Their offensive skills converge somewhere around the key, where their long arms allow them to perform an array of floaters and flip shots, up and away from harm.

Jackson and Lamb are children of the James Harden fallout, players expected to develop as the buffers between Durant and Westbrook, both stylistically and in personality. But in compensating for Westbrook’s absence, the two have both, at times, taken after the image of Durant himself at various stages of his career. It’s as if lab engineers had hoped to clone Durant, and found themselves, instead, with two specimens, each carrying complementary fragments of his game.

Together, they form a complete picture of Durant’s divergent personalities in the past. Lamb, burdened last year by a lack of minutes and the high expectations clanging in the echo chamber, has found peace through rounding out his game and finding his niche. He’s put in more time on the defensive end, and, offensively, has settled comfortably into the role left vacant by Kevin Martin. Lamb’s success is largely dictated by the flow of the game and the flow of ball movement. Think Durant in 2010.

On the flip side, after coming up short in his first taste of postseason action, Jackson’s confidence in his ability to create is peaking, and it’s come at a good time — think Durant in 2011. Jackson has remained second in command as far as ball-handling duties go, with Westbrook still recovering from his latest knee scope, and recently, he’s gone as far as waving off Durant to initiate the offense himself. It doesn’t usually go over well with Durant in the moment, but creative tension is a defining element of the Thunder’s offense. The ability to replicate that kind of tension, even with Westbrook out, has been an important development. 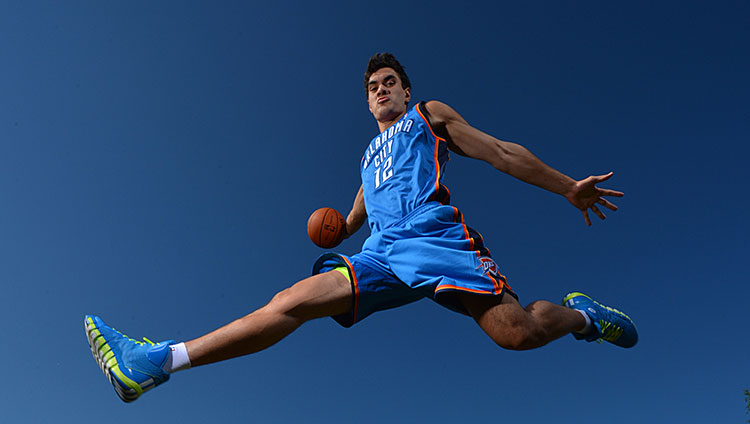 Every other player in the NBA is a “fake tough guy.” It’s a loaded term that comes prepackaged with scowls and spittle, neither of which Steven Adams projects on the court. He’s not well versed in the artifices attached to the game. He doesn’t live by an NBA Bushido code. His reason for playing hard isn’t to give his team an “edge”; he’s not swinging his limbs around to send a “message”; he’s not staring down opponents, trying to get into their heads. He’s just a big kid playing a kid’s game, trying his best not to get bullied by those around him. Despite this (or likely because of it), there might not be a player in the league who has infiltrated his opponents’ minds more quickly than Adams.

Since preseason, there have been five instances in which players have retaliated against Adams in his rookie season, four of which led to ejections. The offenders cover the entire spectrum of height, from 5-foot-9 to 7-foot-1, and several in between. Adams is an equal opportunity annoyer. He is the un–Kendrick Perkins, improving upon his predecessor’s methodology by going in the opposite direction. He can play mind games unconsciously, and that’s an incredibly rare skill. I mean, how many times has Perk gotten an opponent ejected? How many times has he done it without furrowing his eyebrows?

Adams’s expressions, plain-faced and a bit oafish, give off an air of obliviousness, which apparently is just as offensive as getting into someone’s face with a snarl. You get a sense that despite the success he’s had and the coaching staff’s faith in his abilities, he still doesn’t really know what he’s doing out there. But he plays with a great deal of instinct, something Perkins has never been able to fully embrace. As a youngster, and even now, Perkins overthinks the process: He holds the ball for a beat longer than he should; he pump fakes when he should go straight up; he psychs himself out trying to make the perfect pass. There is no such hesitation from Adams. He might not yet have his steps down, but he follows through with the conviction of a player who doesn’t know better.

Adams’s arrival has coincided with a decline in Perkins’s minutes. Perk has played 39 percent of the team’s total minutes at center, a 10 percent decrease from last year, and a 31 percent decrease from the staggering 70 percent he played in the 2011-12 season. Brooks has been blamed for his rigid lineups, but they’re getting better. Perkins is still very much a vital part of the team in Brooks’s eyes, but when his day of obsolescence finally comes, Brooks will have the perfect successor waiting in the wings. 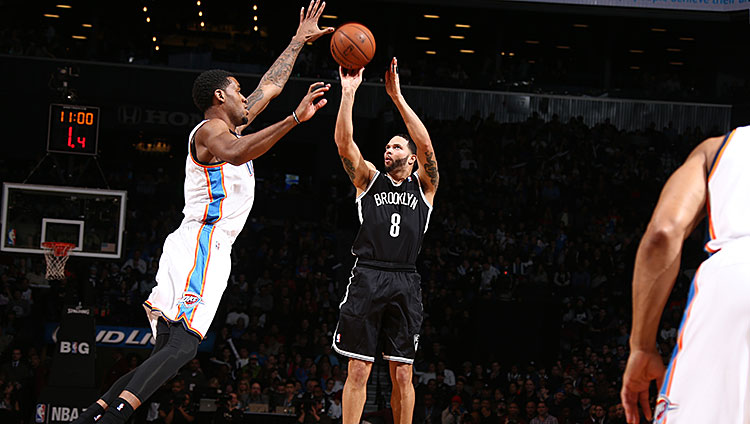 Perry Jones’s reintroduction to the world came two weeks ago against the Miami Heat. He guarded LeBron James in the post and out on the perimeter; he chased Ray Allen around screens. He did the little things, which sometimes led to big things. With two seconds left in the third quarter, Nick Collison chucked a pass traveling three-fourths of the court. Jones, elevating over Ray Allen’s outstretched arms like Megatron, tapped the ball over to the left side, right to a trailing Derek Fisher, who lined up a buzzer-beating 3-pointer to end the quarter. It was the savviest play of Jones’s young career. The cameras continually panned to him on the court or on the bench as Hubie Brown praised him on numerous occasions for his athletic ability and defensive effort against the best player in the world.

Physically, Jones is still every bit the specimen he was at Baylor. Even at the NBA level, there isn’t a player his size who can run as fast as he can. Watch him play this season and you’ll find a completely different player. Without the burden of being a primary option on offense, Jones has funneled all his attention into becoming the Thunder’s one-size-fits-all defender off the bench, showing the kind of focus, patience, and discipline that was simply not there in college. Hell, it wasn’t there last year, either. I sat and sighed through a number of his Tulsa 66ers games last winter (the coldest winter), growing increasingly restless as Jones would suffer defensive lapse after defensive lapse — some so severe, you’d consider them progenitors of the Amar’e Defense. The gulf between the player he is now and the player he was a year ago is vast, even if it isn’t easily quantifiable.

In the short view, Jones resembles a supercharged Jared Jeffries, a player tasked with defending positions 1 through 5, scoring on easy opportunities around the rim, or the occasional corner 3. I sincerely mean that as a compliment (who knows how Jeffries’s perception would’ve been different had he played for a contender). But the Thunder are playing a much longer game with Jones, and there is a precedent for his development path. In 2011, then-rookie Paul George had a breakthrough performance in Game 2 of the Pacers’ first-round series against the Chicago Bulls, where he was given the primary task of guarding Derrick Rose. It was the first glimpse of a budding defensive star in the spotlight, and the Thunder might have their hands on the next one.

Of the Thunder’s new breed, Jones’s trajectory is the least concrete. Though Jones is already cutting his teeth defending the league’s best, it’s hard not to watch him in a way we would a draft prospect. There’s still a newness to him. We’re only at the surface of his potential, and he’s only gone so far down the well himself. Between MVP races and title contention, some things in Oklahoma City are looking fairly certain, but Jones remains the tantalizing mystery. The Thunder may have molted from their fresh schoolboy image, but Jones is the trump card keeping that spirit alive.

Relive Kings-Ducks at Dodger Stadium with this amazing film shot on 8mm.