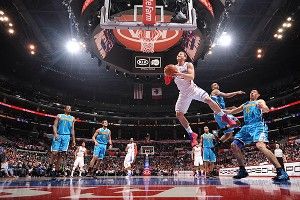 1. The Clippers do something very cool before their Monday-night game against the New Orleans Hornets. They invite Ricardo Brown, a member of the Philippine Basketball Association’s Hall of Fame, to meet with the Clippers’ Filipino American fans. A small crowd gathers in a VIP conference room a couple hours before tip-off to mingle and take pictures with Brown, a Filipino American who starred at Pepperdine for two seasons and was drafted by the Houston Rockets in 1979. Brown, a point guard, never made an NBA roster, but he had a brilliant career in the Philippines, where he played a pioneering role as the first major Fil-Am player to return to his parents’ homeland and become a bona fide star in the local league. He also earned the nickname “The Quick Brown Fox,” which sounds a tad goofy nowadays, but hey, what can you expect from 1980s Manila — it’s the same time and place where the American Ninja franchise got its start. I spent three years in the Philippines researching the country’s fervent basketball culture, and I listened to several of Brown’s former teammates tell stories about how he brought guard play in the country to a new level. For me and the fans who arrive early to meet Brown, it means a lot to see Philippine basketball get some recognition from an NBA franchise.

2. Chris Paul can’t miss on Monday. Most of his shots come on broken possessions. Sometimes the ball is pitched to him late in the shot clock and he has to get off a quick jumper. Sometimes he waits for a high screen that comes later or not where he wants it to be, so he shoots a split-second grimace at a basketball world that can’t hope to match his precision, then goes to work creating a runner or pull-up in the lane. These are very difficult, contested shots, and in the first half they almost all go in. He finishes with 25 points on 9-of-17 shooting with 10 assists and four steals.

3. Midway through the first quarter, we are blessed with greatness. Iconic sitcom actor Alan Thicke arrives and sits about seven rows back with his ladyfriend, who feeds him popcorn by hand between sips of Diet Coke. From now until halftime, I find it difficult to focus on the game. Instead, I peer to my left every 15 seconds, hoping to catch the moment when Thicke’s companion deposits a Popcornopolis morsel into his mouth.

4. There’s a ruckus on the other side of the court. I learn from peering at my press row neighbor’s Twitter feed that a fan has been ejected for throwing an object at Hornets coach Monty Williams. Williams is wearing an oversize beige suit that reminds me of Dell Demps, the general manager whose misfortune it is to serve Hornets de facto owner David Stern. I think of Demps because he also spent some time playing in the Philippines, and he continued to have suits tailored in Manila long after he’d left the country and became an NBA front-office man. In 2008, I sought out his tailor — Rich & Famous on Pasay Road in Makati City — and asked for a suit like the ones Dell Demps and Bruce Bowen (whom Demps referred to Rich & Famous) wear. That suit is not beige, but it is currently the only one I own.

5. Thicke disappears at halftime. He’s likely headed to the Chairman’s Room, a lounge deep in the bowels of Staples Center, where he can enjoy free gummy bears and watch the game without being gawked at by bored, snarky Grantland writers. It’s a major blow, because I would have loved to see how Thicke would have reacted to Blake Griffin’s third-quarter dunk over Gustavo Ayon. It’s a splendid jam, and it almost looks like Griffin slows down a half step to let Ayon rotate before launching himself along the baseline and windmilling the ball through the rim. I envision Thicke in the Chairman’s Room, chest-bumping Scott Baio.

6. That was the sublime side of Griffin. In the fourth quarter, when the Clippers stretch their lead to more than 20 points, we see his ugly side. Hornets back-up center Chris Johnson grabs a defensive rebound and is immediately stripped under his own basket by Paul. Paul whips a pass to Griffin, who throws down an uncontested two-handed dunk. Once he lost the ball, Johnson was out of the play, but that didn’t stop Griffin from staring him down after a routine dunk, as if to say, “You couldn’t hold my jock, Chris Johnson.” Athletes need confidence, but on this play, Griffin looks about as likable as Cobra Kai sensei John Kreese. Self-awareness does not exist in Griffin’s dojo — in his mind, he is fouled every time he makes a move and Clipper Darrell’s M-V-P chants in his honor are totally legit.

7. It’s midway through the fourth and the Clippers are way ahead. This can only mean one thing: Nick Young time! Few rotation players seem to relish garbage time as much as Young, who ended Saturday’s Clipper blowout over the Memphis Grizzlies with the flourish of a 360-degree reverse layup. He’s back at it in this joyless fourth quarter, nailing a 3 from about 28 feet as the shot clock runs out and scoring a traditional three-point play on a spinning layup in the Clippers’ next possession. Earlier in the game, Young slipped and fell to his knees while making a move with the ball, and when he found himself in that compromised position, he passed to a teammate. Nick Young the Washington Wizards shooting guard takes that shot from his knees. This is progress.

8. The “Westside Rentals Guy,” as his T-shirt proclaims, is dancing his buns off. The Clippers hold a comfortable lead with less than five minutes to play, and about half the crowd starts looking for the exits. This matters little to the unflappable Westside Rentals Guy, a walking billboard for a Los Angeles real estate website who dons a red headband, cape, and boxing gloves at every Clippers game and dances like Donkey Kong on speedballs. I’m not sure whether to hate him or feel sorry for him. Well, judging by this video, it’s the latter.

9. The buzzer sounds and I check the JumboTron to write down the final score: Clippers 97, Hornets 85.