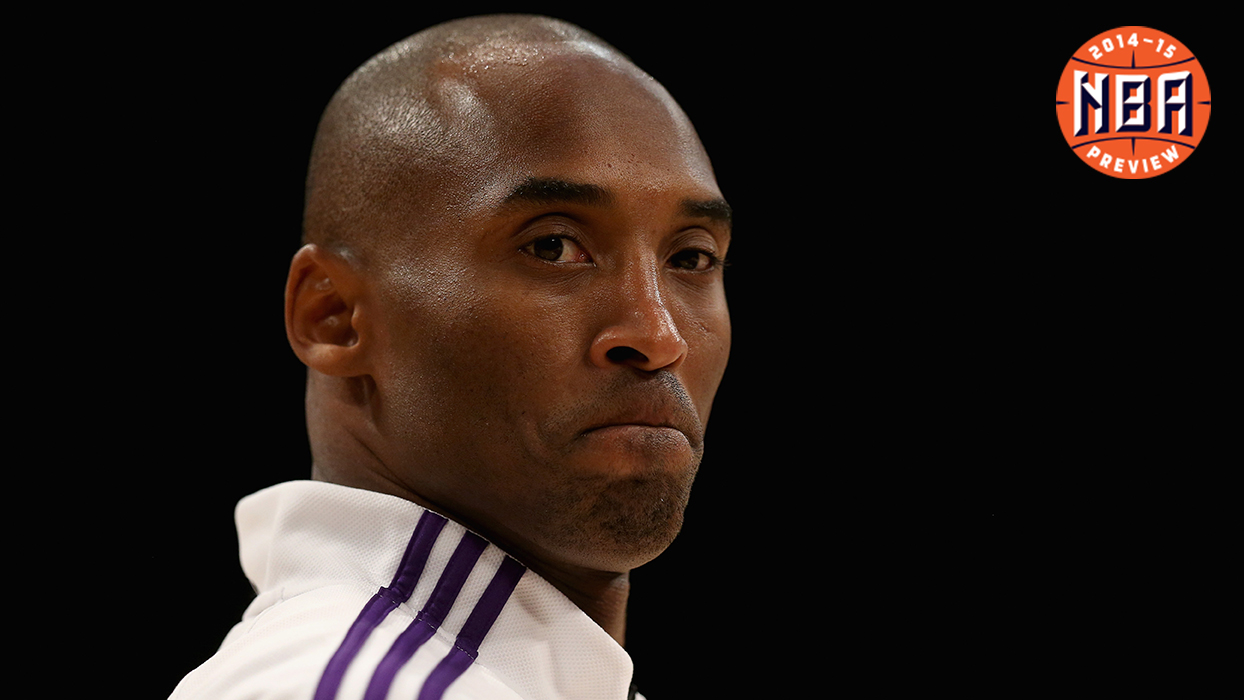 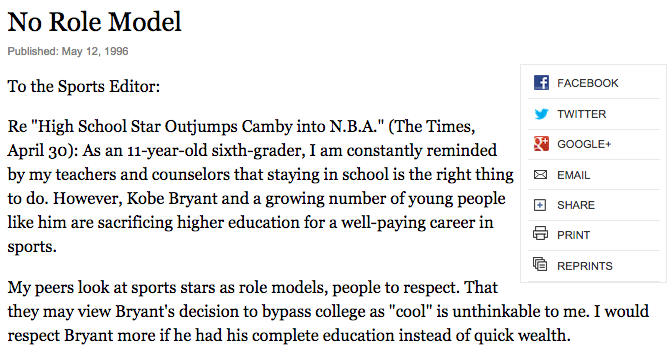 Kobe Bryant is facing his NBA mortality. In his own words, “Soon, but not yet.” It’s a testament to the ferocity with which he’s attacked his career that even though logic and a basic understanding of human biology tell us that, yes, definitely yes, Kobe is near the end of his NBA career, just writing it out like this carries a faint hint of danger. It’s a bit like an aging dictator not showing up for his breakfast one morning; who dares go into his bedroom to check on him?

Because Kobe has proved people wrong before: by jumping from Lower Merion High School to the NBA; by blending his game with Shaq’s; by winning titles after Shaq left; by salvaging his public image; by hero-balling out to such an extent that his copious bricks actually transformed themselves into a rare species of unselfishness.

So, if you come out and say that Kobe is close to being done, you do so after considering the possibility that his indomitable, coiled Mamba fury, buoyed by harvested ligaments and European blood-spinning technology, can find a way to turn you into Dewey Defeats Truman in miniature. I mean, would anyone be all that surprised if Kobe took his revenge for being ranked the 40th-best player in the NBA by averaging 40 points (on 40 shots per game; Lakers go 4-78)?

But 36 years old and over 45,000 minutes (13th on the all-time list above Moses Malone, the first player to jump from high school to the pros, and less than 200 minutes behind Robert Parish) equals gray-whiskered dog years for all but the rarest of the rare pro ballers. And, in the wake of one of the most devastating injuries in sports, it is fair to consider this the twilight of the Bryant Age. I feel confident in saying that. I think.

What’s strange is how sad I am about this. Sad, because I have always been a fervent Kobe hater.

There’s a difference between sports hate and real hate. Real hate is an awful, destructive emotion, fueled by ignorance, which twists the minds of those afflicted into red-tinged fantasies of violence, signified by apoplectic outbursts of profane fury. Sports hate is exactly the same, with the key difference that sports hate is largely what makes sports (and therefore life) so enjoyable. I loved hating Kobe Bryant.

One stereotype I’ve found to be true in my not-all-that-worldly travels is that of Canadians being a polite people. So, I do think it’s notable that when two-time MVP Steve Nash was asked to describe Kobe Bryant, he thoughtfully replied “Mother … Fucking … Asshole.” It’s also notable that Kobe loves that assessment.

That the experience of interacting with Kobe is so much like the subjective perception of Kobe the basketball personality is somehow comforting. Truth still exists in this world, and there is balance in the universe. 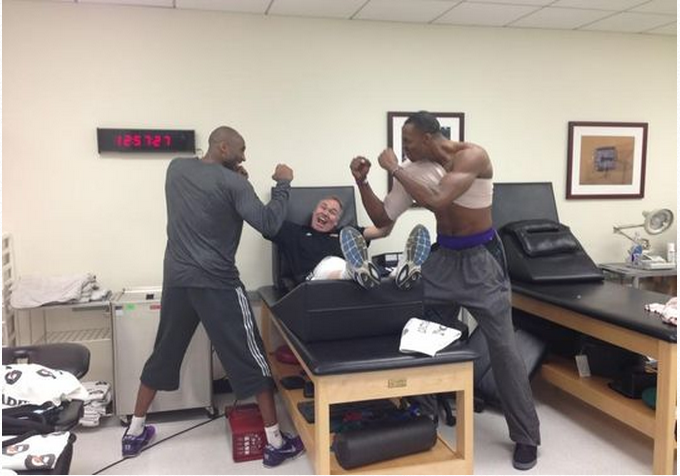 Just in these past few seasons, Kobe has opened up. He’s done a fashion shoot; shot a Tom Cruise–in-Magnolia-style commercial that fully embraced the personal qualities Nash noted; been the subject of two documentaries (the second of which debuts next month); and joined social media. Via his social media accounts, he’s tweeted the definitive picture of Dwight Howard’s year in L.A.; ostentatiously unfollowed Dwight when he fled to Houston; wrote a startlingly raw Facebook post about his Achilles injury; decried the Steve Blake trade (Steve Blake!); and compared the 2013-14 Lakers season to feces.

He gave an interview recently, over lunch with Arianna Huffington, in the New York Times, which is basically famous person mad libs. They talked about their highly successful people habits. Kobe described how he cold-emailed Arianna in order to pick her brain. He talked about watching Discovery Channel and studying the body mechanics of cheetahs, how they use their tails as counterweights, conjuring images of Eddie Vedder zoning out to a documentary about honeybees in Singles.

Since that interview dropped, I’ve spent an embarrassing amount of time laughing while imagining Kobe cold-calling the president of Discovery Channel and saying things like, “What can you tell me about the way a cheetah’s hips are structured?” or “Inspiration surrounds us. I understand that blue whales have the largest penises on earth.”

In that same interview, Kobe talked about how, when he was younger, he would order his more veteran teammates around. But, he insists, he’s since become more empathetic. “As I got older, I started understanding it’s not just about the game. People carry emotions with them. They have lives off the court. That helped me communicate better,” Kobe told the Times.

So, how does the new empathetic Kobe — the great communicator — use that understanding of his teammates’ off-court lives to better lead and inspire them? In the case of Nick Young, it’s …

• Answering the question “Iggy Azalea or Swaggy P” by laughing dismissively then acidly analyzing their respective professional arcs with, “She’s been more successful in her career thus far.”

• Trash-talked him during a scrimmage with, “Don’t play with me, Nick. You’re not strong enough.”

• Put Young out of commission for eight weeks, after Swaggy tore his medial radial collateral ligament trying to guard Bryant. Kobe’s reaction: “Well he’s got to move his feet on defense. That’s the lesson to be learned. If you reach, you’re going to get hurt.” In other words — you reach; I injure. Mother Fucking Asshole.

How can you not love this Kobe?

So, as penance for my many years of blind Kobe hatred, and with a new, appreciative perspective on the crazy man he is, I feel I should push back on the signature criticism of Kobe’s career: that he “stole from Jordan.” Having been an avowed Bryant hater, I readily admit to trotting that little rhetorical chestnut out in casual conversation over the years, or letting it pass unchallenged. “Kobe copied Mike” is kind of like “Senator, you’re no Jack Kennedy.” It’s the perfect, inarguable punctuation mark to button up any Lakers gripe and/or Kobe slander. After all, the truth of it was plain to see.

But you only have to scratch the “Kobe steals from MJ” charge to reveal the sports hate–addled, pretzel structure of the logic underneath. Playing basketball is not intrinsically an act of narrative. Basketball, despite the drama, is not, you know, literature or something. Kobe can’t plagiarize from Mike. What Kobe has done is mold his play after the greatest player ever, and, not incidentally, one who played Kobe’s position. That just makes sense to do, from a caring-about-one’s-craft standpoint.

The haters — again, of who I have been one — aren’t “mad” that Bryant copied MJ; they’re mad that he did it so effectively, that he got so very close. The criticism is also perhaps the single dumbest contemporaneous critique of a great player ever. All the other ones — LeBron not being clutch, or Wilt not being a winner — may be ridiculous, but they at least pretend to pertain to the winning and losing of basketball games. Clearly, saying that Kobe is following in the footsteps of Jordan cannot be considered, from a strictly basketball sense, as something detrimental. It’s pure haterade.

The letter at the top of this piece shows how Kobe was never going to get a fair shot at being a beloved national sports figure. The goal posts were always going to be set up just out of reach. If he goes to the NBA from high school, he’s a bad role model. If he successfully jumps from high school to the NBA to become one of the greatest players of all time, well, he never surpassed Jordan. Over his career, he’s been, in some ways, the most popular villain in the NBA. But time passes. The 11-year-old kid who wrote that letter to the editor is now a writer for the New York Times. I’ve gone from being a hater to a profound appreciator.

And Kobe is still our Mother Fucking Asshole. For just a bit longer, anyway.

World Series Preview: Five Keys to Victory for the Royals and Giants