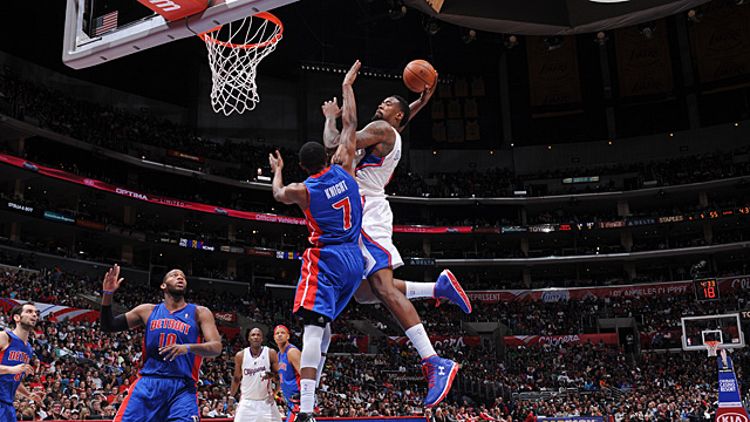 Why jump B. Knight?!

Chris Ryan: Because you’re supposed to jump, dummy! You’re supposed to stop the opposing player from scoring. Look, nobody finds all this Brandon Knight R.I.P. stuff more hilarious than me. I’m a big proponent of dunk-as-finishing-move. But let’s give him a little bit of credit here. Knight’s Pistons were down 19 points at the time of this … incident. Nobody made him challenge one of the Game of Thrones dragons to what was essentially a suicide mission of a jump ball. I don’t know; maybe it’s just Sunday night/Monday morning blues, and I’m reacting to Blake and Co. hulking out on the bench, even though everyone can see how hard Knight hits the deck. Lots of players get Mozgov’d or Weis’d because they were just in the wrong place at the wrong time. There’s something pretty admirable about Brandon Knight throwing caution to the wind and trying to make a play here. He also had the stones/wherewithal to get up, dust himself off (once Greg Monroe and Charlie Villanueva were done staring at him like the man who fell to earth), bring the ball back down the court, get fouled, and make some free throws. Brandon Knight challenges people. He went after Kyrie and got his eyebrows singed, and he tried to dogfight with DeAndre Jordan and wound up on an express elevator to the earth’s core for his troubles. We spend so much time celebrating the kind of play DeAndre made here, maybe we should spend more time celebrating the kind Knight makes.

Also, he has a pretty good sense of humor …

(All .GIFs by HeyBelinda, unless otherwise noted)

Ryan: Just kidding, Brandon Knight. You are the star of Paranormal Activity 9: The DeAndreing.

Robert Mays: I can only imagine what it’s like to be an NBA center, wake up on a Sunday morning, come to work, and know you have to deal with Joakim Noah for two hours. Not that Dwight Howard is or should be afraid of anybody, but the prospect of it has to be pretty annoying. He’s going to come at you all day, but sometimes, at noon on a Sunday, a dude just wants to chill.

Well, yesterday, Dwight Howard and his 21 rebounds out Noahed Noah, and the Lakers are back in the playoffs for the first time in a long time, thanks in large part to him doing things like what happens from :19 to :21 above. He’s not healthy — not quite yet — but he’s on his way, and it’s happening not a moment too soon.

Kobe Bryant to Michael Wilbon on his relationship with Dwight: “It’s not like we’re best friends …” sulia.com/my_thoughts/30…

Ryan: Starting to wonder if maybe, given that and his response to the Lakers moving into the eighth playoff spot in the Western Conference (“Yippee.”), if Kobe should just retire and start writing for Girls.

Ryan: Because of some of the other activity last night, Miami’s boa constrictor imitation went a little under the radar, as did their extension of their winning streak, as did the fact they beat their most substantive Eastern Conference rival, handily, even though their best player only scored 13 points. According to ESPN Stats & Information, the Heat held the Pacers to 38 percent shooting in the first three quarters. According to me, 38 percent sounds a little high. There was a decided Gold Swagger shortage in Florida, with the Heat flexing their muscles all over the place …

Great Dexter Pittman’s ghost, this will be a good playoff series. Might be a short one, too.