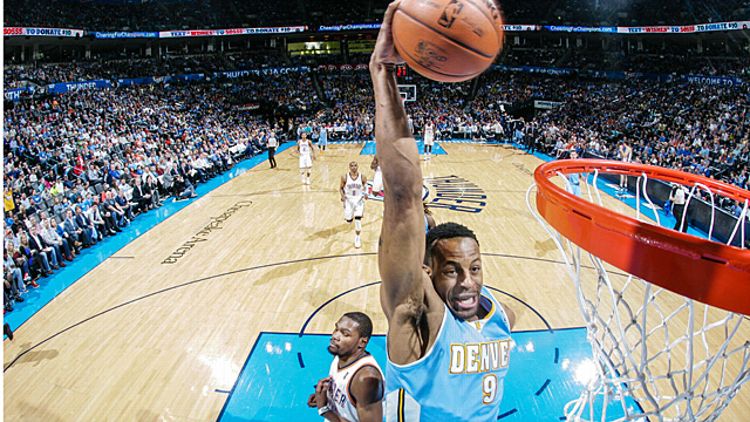 Chris Ryan: Last night’s Thunder-Nuggets clash wasn’t exactly the basketball game you meet in heaven that I had billed it as (to myself) (I may have sent you an e-mail about it), but it was pretty instructive. I think it’s becoming harder and harder to quantify what coaches do in the NBA, if only because it’s becoming easier to do so for players. We can see where players should shoot, where they shouldn’t, we can watch them take 200 elbow jumpers on Synergy, and talk about how efficient or effective they are when they take them. For almost everything we might think about a player’s game, we have a number to support or poke holes in our convictions. For coaching, though, we’re still just guessing, really; reading body language, judging substitution patterns, second-guessing timeout calls at the end of games. If you’re like me, you judge them by their hair. (Hi, Vinny.)

All that being said, I don’t know that I’ve ever been so aware of what a coach does as when I’m watching this Denver Nuggets team play (especially over this 13-game win streak). The way that Kenneth Faried, Kosta Koufos, and JaVale McGee get the ball to guards, seemingly mid-rebound; the relentless way the Nuggets raid the paint (they outscored the Thunder 72-50 there last night); the way they jump lanes to get steals. Look at Gallo hawk this pass and start a break in one continuous gesture:

It felt like every time the Thunder tried to drive and dish, a Nuggets player was waiting on the other end of the pass.

I love the way Denver exploited one of the most glaring weaknesses of the Thunder (their transition defense); I love the variety of 5-man units they throw at teams (I think my favorite right now is Miller-Iguodala-Brewer-Gallinari-McGee), perfectly calibrated to unsettle opponents just as they’re getting into an offensive groove. That’s all coaching. The way they play is an internalization of Karl’s teachings. He knows his players, he knows what each of them does well, and he knows when to put them into the game so that they can do exactly that. Even JaVale:

Erik Spoelstra would (rightly) have to win Coach of the Year if the Heat continue their historic win-streak, but nobody has done a better coaching job in the NBA this season than Karl.

Robert Mays: There were mixed feelings as Isiah Thomas and Chris Webber discussed the Nuggets’ need for a late-game closer after the Thunder had cut their deficit to five late. The last few Denver possessions had all yielded a great shot, and if Ty Lawson and Kenneth Faried had finished their bunnies or Danilo Gallinari had knocked down a wide-open 3, the notion of needing a crunch-time crutch would’ve been moot.

Still, there’s something to be said about what the league’s other streaking team has done to stay that way, and how when the game slows down and the court gets small, that sure set of hands is nice to have. Last night for Denver, those hands had just turned 37 years old. In the fourth quarter, Denver’s high-octane look was replaced by Andre Miller’s decidedly old-man game. Lawson makes Denver go, but Miller helps them steer.

Mays: Russell Westbrook had his way for most of last night, but watching Iggy check him in the final few minutes was something to see. Westbrook could cross over — like he normally would, and begin his move to the basket, like he normally would. Only, instead of blowing by whoever happened to be guarding him, he’d just slam chest-to-chest into a waiting Iguodala. It was strange to watch; there seemed to be no reason for him to keep trying, until you remembered that, normally, there’s no reason for him not to.

The Nuggets’ offense is probably more noticeable, because they play like they’re on fire, but being a wing player against this team seems less than enjoyable. It’s been noted how their interchangeable parts allows them to switch just about every screen. They’re pretty much a five-man unit of condors.

Ryan: One bright spot for the Thunder last night.