NBA Short-Attention-Span Power Rankings: Back to the Grindhouse 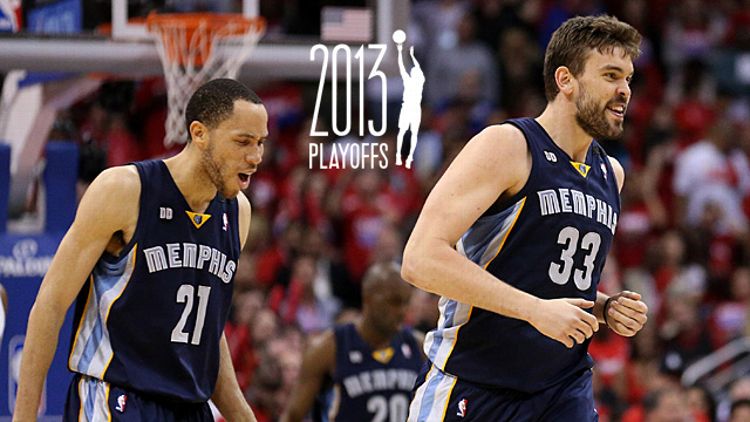 May 1, 2013
by Brett Koremenos, Chris Ryan and Danny Chau

Chris Ryan: The fact that whatever happens on the court is so grimy, Tony Allen feels the need to wander off with that look on his face. Also, it looks like Z-Bo is using that cup as a dip-spitting receptacle, and the Keyon Dooling photo bomb in the back is Bosh-ian. But my favorite thing right here is the apparent difference between what Z-Bo is saying and what Jon Leuer is saying.

Danny Chau: “They tried to send hit men on Steph.”

Mark Jackson’s rhetoric was flawless during his postgame presser last night. His comments hit all the right notes. His barbs were thinly veiled, and intentionally incendiary. They’ll frame the dialogue leading up to Game 6, which promises to be the best game of the first round. The offending plays probably don’t warrant Jackson’s level of outrage (has anything in the series been significantly worse than the physicality of Clippers-Grizzlies?), but he knows what he’s doing. Playoff classics are born of palpable tension and drama. As a player at the center of some of the most stir-crazy playoff teams of the ’90s, he understands the impact of a little provocation, of a little controversy.

Jackson gave a backhanded compliment to Kenneth Faried, noting his illegal screens and alluding to the intent to injure Steph Curry. He invoked the names of former teammates Charles Oakley, Dale Davis, and Anthony Mason, just in case ’90s NBA fetishists haven’t already gotten misty from this familiar level of intensity. Maybe the hits aren’t as big, but that old-school ethos is starting to peek through. However, Jackson is no longer a player in the middle of the storm. He’s a coach. He has a moral obligation to look out for the health and safety of his players. He’s peering down at the warring sides from a different, more paternal perspective, but that won’t stop him from cultivating aggression in his team. For a squad full of playoff newcomers, maybe roughing up is the best way to accelerate the learning process.

Of course, Jackson saved the best for last:

“I’ve got inside information that some people don’t like that brand of basketball. And they clearly didn’t cosign it, so they wanted to let me know that they had no parts in what was taking place.”

Awesome. It’s not playoff basketball until the conspiracies start trickling in. So then, who’s the mole?

2a. It’s Not Kenneth Faried

Brett Koremenos: A coach’s primary job is to manage a rotation. If you play the right players, at the right time, it almost doesn’t matter what you run or how you choose to defend, because an optimal lineup will put you in a position to succeed. Vinny Del Negro’s Game 5 performance, in that respect, was, in a word, lacking. Here are the four biggest blunders from last night and the series in general:

1. Eric Bledsoe didn’t play nearly enough; Chris Paul played too much
It was particularly egregious to see Bledsoe fail to reenter the game until very late in the third quarter after a sterling five-minute stretch in the first half. Not only that, but he needed to be trusted to give Paul a brief rest in the second half. Because Paul played the entire second half, he wore down at the end and forced the team to go through a stretch late in the fourth where it was Jamal Crawford and Bledsoe handling the ball in pick-and-rolls while Paul conserved energy as a spot-up shooter.

2. Blake Griffin needed to be rescued from himself
Griffin showed great toughness by giving it a go on a bad ankle, but after returning midway through the second quarter, it was quite clear he just wasn’t a guy capable of helping his team in a meaningful way. This is important to consider, given Del Negro allowed him to start the second half and play the first six minutes — a stretch in which the Clippers were outscored by seven.

3. The carousel of big men needs to stop
Rotating five big men — Griffin, DeAndre Jordan, Ronny Turiaf, Ryan Hollins, and Lamar Odom — is a fine strategy when all five are extremely talented or you’re playing a game in the preseason. But Turiaf and Hollins have limited skills, and Odom is a shell of his former self. When Griffin is healthy, he and Jordan, despite their poor foul shooting, should have the lion’s share of minutes while Odom should fill out the rest. And despite rotating through three of them (Odom, Jordan, and Turiaf) in the final quarter as he attempted to slow down Zach Randolph, Del Negro somehow passed over the guy who was the most effective the majority of the evening (Hollins).

4. Failing to go small against Memphis is a sin
While Randolph and Marc Gasol are a load to handle inside from a defensive standpoint, they can be exposed by teams that go small with a 4 man who’s capable of stretching the floor. Randolph, in particular, struggles to guard in space, and the Clippers had some success on the offensive end of the floor when Matt Barnes played as a small-ball 4. If Paul had more gas in the tank, there’s a good chance the Clippers could’ve ripped apart the Memphis defense and put Hollins in a difficult position with his own rotation.

4. Andre Iguodala “I Got This” Hands

Chau: Memphis has a system in which Tony Allen owes every player on the Grizzlies $100 if he misses a breakaway layup. What happened at 7:21 in the fourth quarter wasn’t a missed breakaway, but his teammates should still expect — nay, demand — $100 bills taped to their lockers. Allen has botched an embarrassing number of layups in his career, so it’s not too much of a shock when it happens. But every once in a while, you have to show the people something new. So he did, and probably made history. Allen’s layup might be the only attempt ever to sit on the back of the rim and turn into a jump ball.

Memphis won that jump ball, by the way.

It ended up in Allen’s hands.

And then he blew another layup.