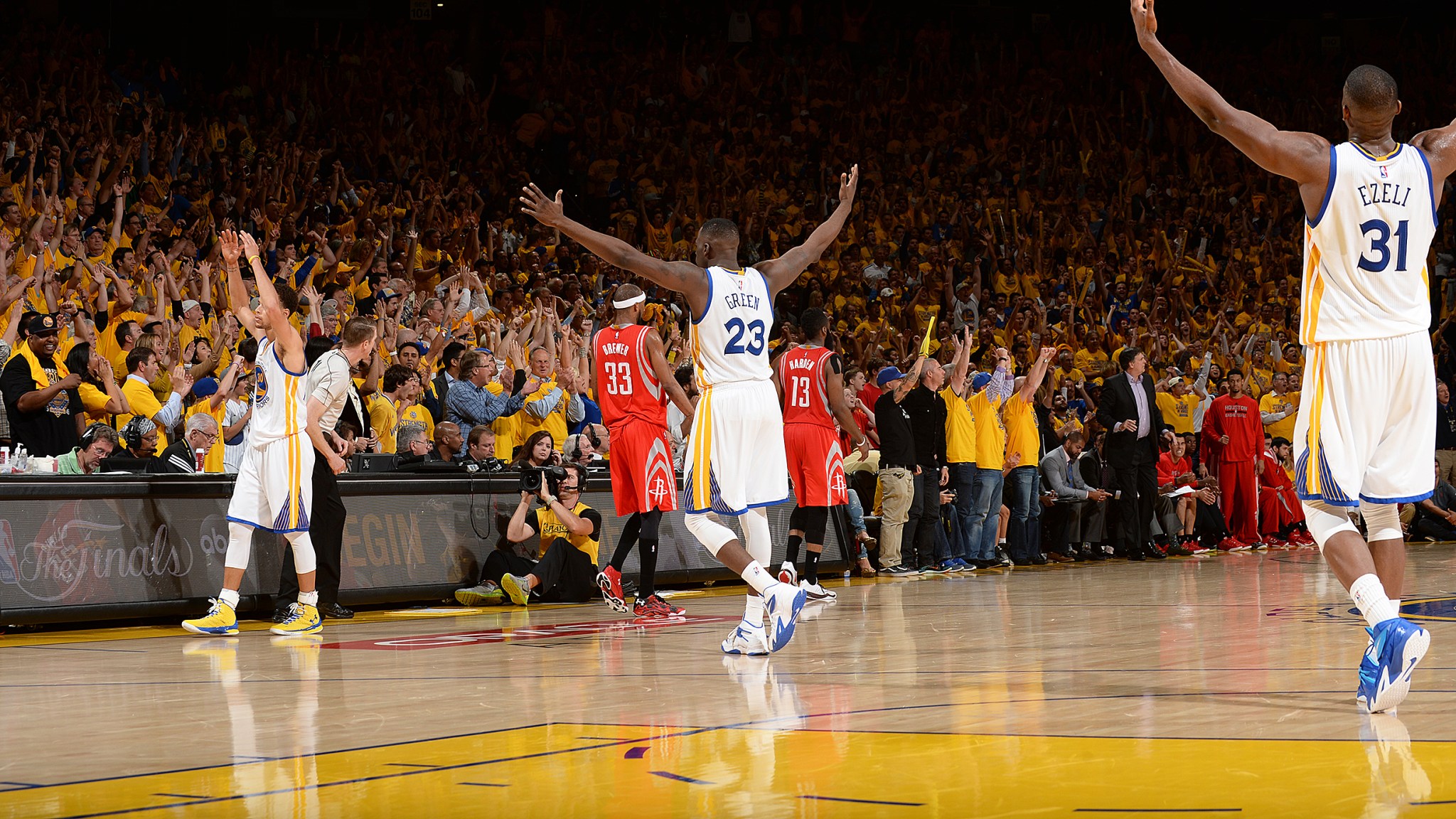 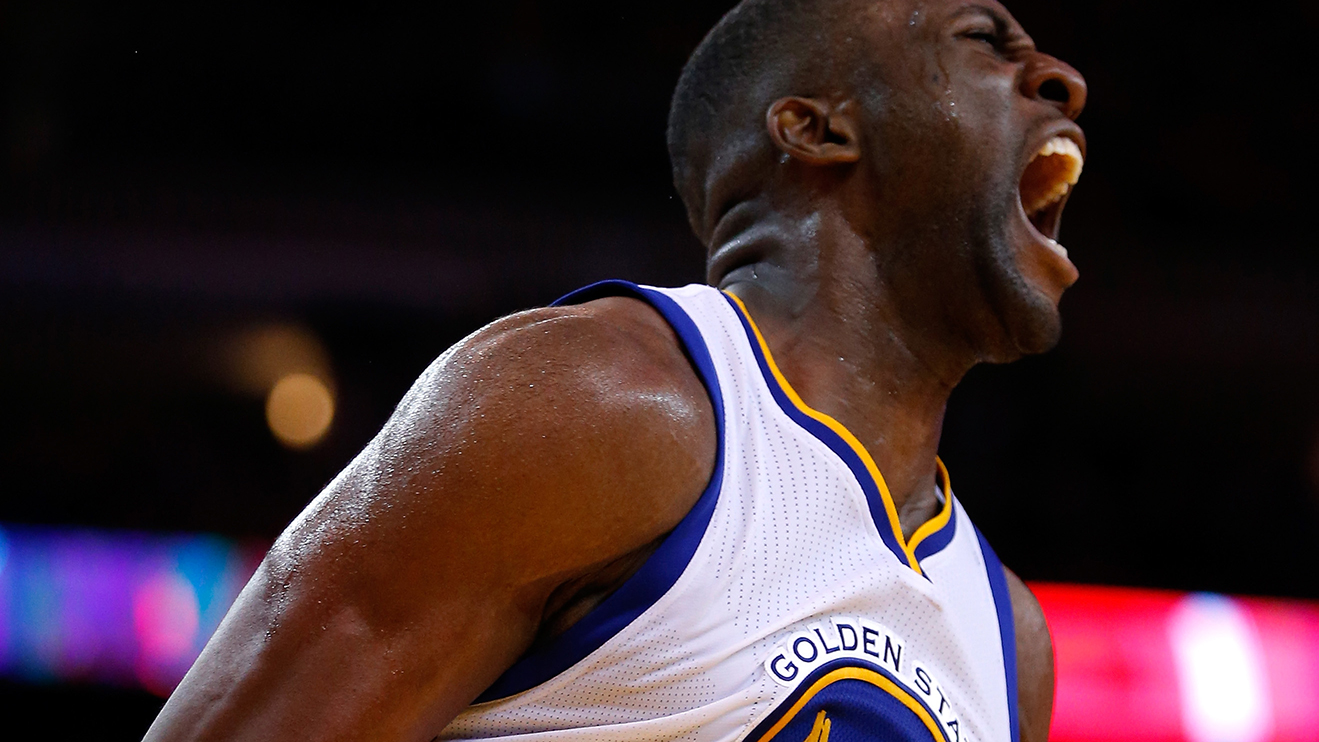 Jason Concepcion: Draymond Green, a defensive shape-shifter and all-around Swiss Army knife, is one of the pillars of the Warriors’ wire-to-wire success. In Game 5, he had nine points, missed all four of his 3-pointers, and shot 20 percent from the floor. Steph Curry is the league MVP, the center of gravity for his team’s solar system, and the greatest shooter who has ever walked the surface of planet Earth. In Game 5, he shot 7-of-21, including 3-of-11 from 3. Foul trouble and a Trevor Ariza Muay Thai flying knee to the dome limited Half-Splash Klay Thompson to 22 minutes. He averaged 32 minutes per game in the regular season and 37 minutes in the playoffs.

That’s the power of depth, especially in a postseason that has largely been defined by injured players and walking wounded. It’s why the Warriors have been the best team in the league all season, and why they can survive multiple key players having bad shooting nights and/or being unable to stay on the floor. Golden State can fill in the offensive blanks with whichever role player(s) happens to step up. Their defense is largely predicated on having an army of similarly sized dudes. In Game 5, those role players were Festus Ezeli (12 points, nine rebounds, one block) and Harrison Black Falcon Barnes (24 points on 10-of-20 shooting, seven rebounds), the most improved shooter in the league this season.

The Rockets, on the other hand, are not built to survive their star player having a bad game. Not against top competition, anyway. James Harden was awful in Game 5, posting what I will now call a cripple-double: 14 points, 13 free throw attempts, and 13 turnovers (a playoff record). He was hounded all over the floor by Andre Iguodala and, occasionally, Green. His crafty handle and normally cerebral play wilted under the pressure of needing to be everything at all times to his team. And yet, despite how badly Harden was playing, Houston looked absolutely rudderless when he sat for any amount of time.

There’s some subtle irony for the Rockets in Harden’s Game 5 struggle. The argument for Harden as MVP was that, considering the team’s various injuries at points throughout the season, no player in the league carried more of the burden of his team’s success. Whether you agree with that particular formulation of “most valuable,” Game 5 proved it accurate. Just not how the Rockets would’ve wanted.

You the Real MVP

Chris Ryan: How Young Is Too Young to Listen to Big Sean’s “Blessings”: My Colu– [IS WHISKED AWAY BY A BALD EAGLE AND TAKEN TO THE MOUNTAIN WHERE THE TRUTH-TELLERS ARE STOWED.]

The Last Thing You See Before You Die

Andrew Sharp: Cursing Durant was one thing. That was amazing. That was fun. Then he went off and cursed James Harden last week. OK … sure. Then Lil B popped up doing interviews with pretty much everyone to talk about his curse, and I started to roll my eyes. This felt like a viral marketing stunt and a depressing reminder of how predictable the Internet can be. Then the Hawks were begging for mercy, and Lil B returned yesterday threatening to curse the Cavs … Enough. Come on. The whole thing just felt corny.

The curse is real.

THE CURSE IS REAL.

The curse is real. 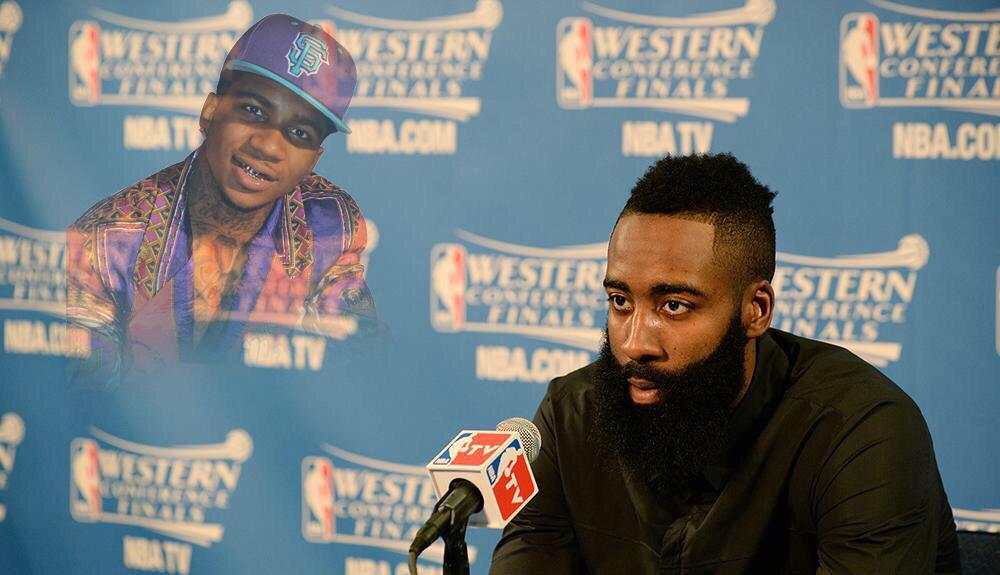 It’s the only explanation for James Harden’s performance besides point shaving. I never should have doubted you, Lil B. Please don’t curse me. Harden was an abomination, and that’s what he gets for blaspheming the Based God.

Related: I think I’m ready for a break from James Harden. Is he great? Is he a top-five player? Is he disgraceful? I really don’t care. I’d much rather be writing about Jason Terry right now. I’m going to miss Jason Terry. He’s the dude in the pickup game who’s so old, it seems like he gets skinnier every year, but then he’s also got that old-man strength to balance things out. He can still kill people from deep, and he’s spry enough to make you wonder if he can play forever. Also, he once got a preseason tattoo of the Larry O’Brien Trophy on his biceps and then went out and beat LeBron to win a title. He was awesome last night. He is awesome forever.

Harden played like a stack of dirty diapers set on fire. Steph Curry was struggling, the game was up for grabs, and Harden literally fumbled it away over and over again. Again, all of this is right on schedule.

Harden is the most frustrating great player in the world, and in that way, he fits perfectly with a Rockets team that is too good to dismiss but not quite good enough to take seriously. Good riddance.1

Who Is This Guy, What Is His Role in the Replay Process, and How Can I Take His Class?

So Much for History 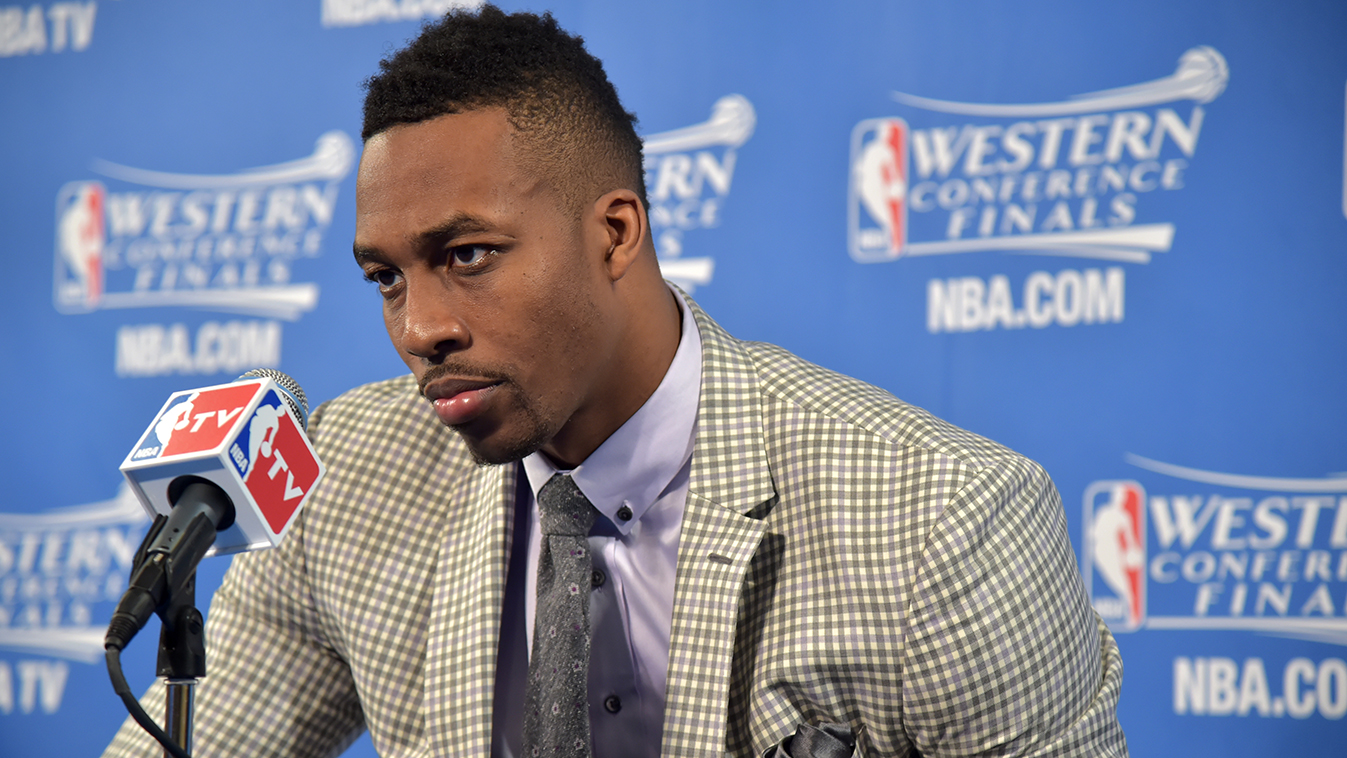 Shea Serrano: Let me be clear when I say this: I don’t care very much for the Rockets.

The Rockets legit could have become the first team to return from a 3-0 deficit. The first two games of the Western Conference finals were games they could’ve won (and I’d argue that Game 2 is one they SHOULD’VE won). Game 3 was a dump, yes, but in Game 4 they were unstoppable. There was a brief moment, in the third quarter of Game 5, just this flick of time right after Draymond Green threw the ball to empty space and Trevor Ariza gathered it and drove for an and-1 that cut the lead. It felt like “Wait a second, these guys are actually going to win.” And if they won Game 5, then they were for sure going to win Game 6, and that makes Game 7 a toss-up, with an unreal amount of pressure on the Warriors. It could’ve happened.

James Harden and Dwight Howard are very unlikable, but not so unlikable that watching them do something that’s never been done in the history of the universe of the NBA would be uninteresting or unfun. 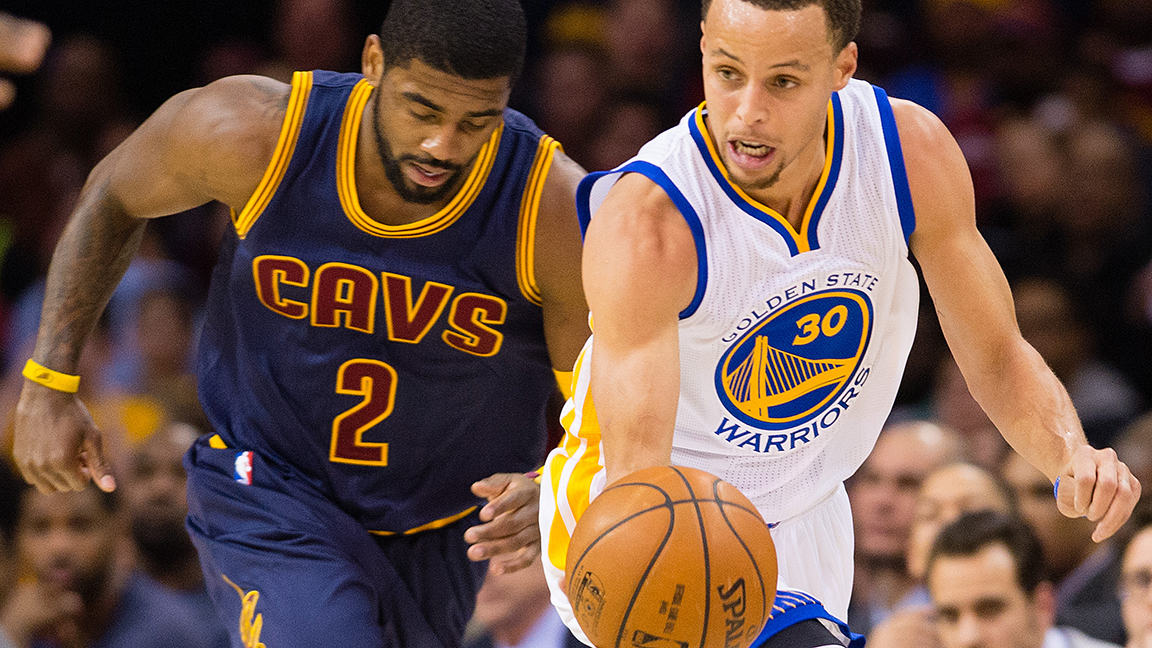 Kirk Goldsberry: There are so many great point guards in the league right now, but it’s hard to find any that are more enjoyable to watch than Stephen Curry and Kyrie Irving. The Finals point guard matchup is magnificent for many reasons, but most of all we’re about to see two of the best dribblers in professional basketball. At any given moment, they can turn a ho-hum half-court possession into an immortal meme that haunts an on-ball defender for years. Just ask Chris Paul:

Curry is the MVP of the NBA, and he’ll need to be if the Warriors are going to win. There’s a bit less pressure on Irving, who isn’t even the MVP of his own team. Still, for the Cavs to have a chance in this thing, Irving will have to be a big contributor. And given that he’s not 100 percent healthy, that’s a big ask.

Regardless, I can’t wait to watch these Finals, and Curry and Irving are a huge reason why. They are breathtaking offensive forces, and the way they blend handles, scoring, and playmaking represents the future of the point guard position.