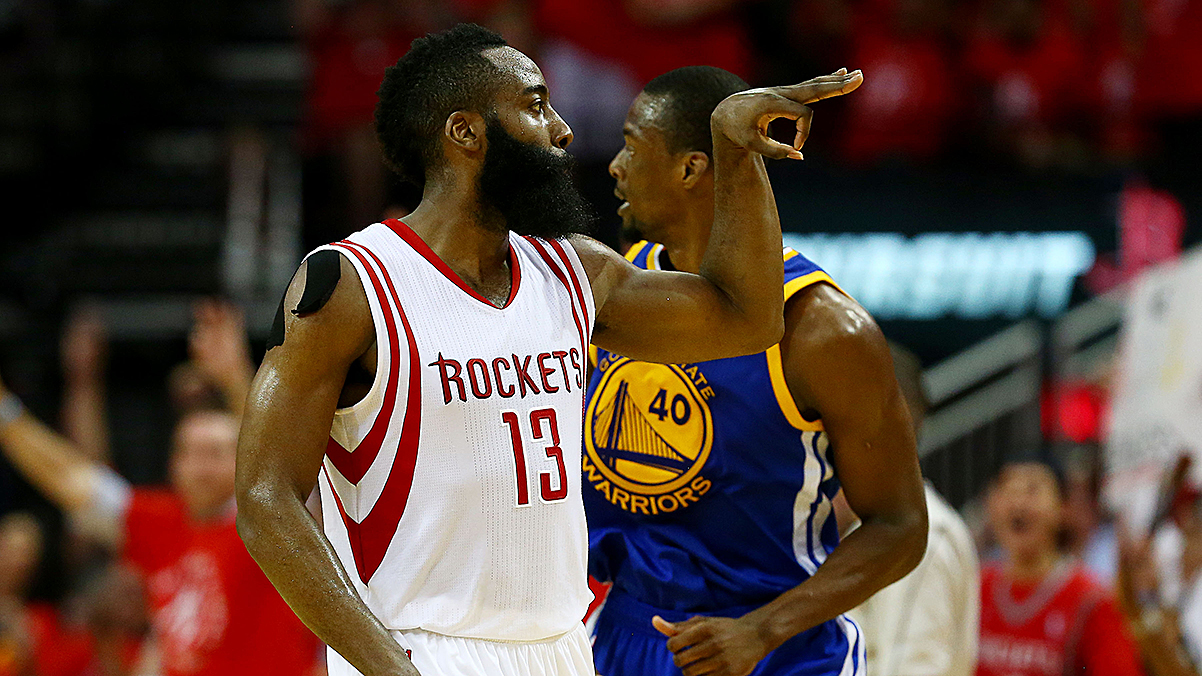 May 26, 2015
by Danny Chau, Jason Concepcion and Andrew Sharp

Andrew Sharp: “We gotta do a better job of being consistent.” Those were James Harden’s first words to Doris Burke after Game 4, and an entire nation nodded its head. But these are the Rockets.

We should know better by now. If you accept that we’re watching the most troll-tastic team of all time, everything else makes sense. This is a basketball team that exists to drive the rest of the world insane.

Everyone expected a dogfight with the Mavs, and they made that series look easy. Then it would be a seven-game series with the Clippers, but wait — better to sleepwalk through the first four games and leave the entire NBA openly disgusted. Then, as everyone dreamt of Clippers-Warriors, it was time to unfurl one of the most incredible comebacks we’ve ever seen.

First two games against the Warriors? Win over the critics once and for all. But then at the end of Game 2, fall apart on a game winner, just to ensure that everyone spends the next two days arguing. Game 3 on Saturday night? Everyone waiting for the counterpunch? Time to take a dive and make sure that game is a blowout by halftime.

Then, last night, with the whole world ready to move on to the Finals and never take this team seriously again:

You can’t understand James Harden and the Rockets. Stop trying.

I mean, I’ve definitely given up. Harden had 45 points, nine rebounds, and five assists, including an endless highlight reel of vicious step-back jumpers. He and the rest of the Rockets were as great last night as they were awful Saturday. It’s perfect. It’s what they do.

Put faith in them, and they will disappoint you.

Bury them in slander, and they will silence you.

James Harden is the NBA’s most valuable nihilist.

He’s haunting us all, reminding us just how random our playoffs really are. There is no order. There is no narrative. Just Game 5. 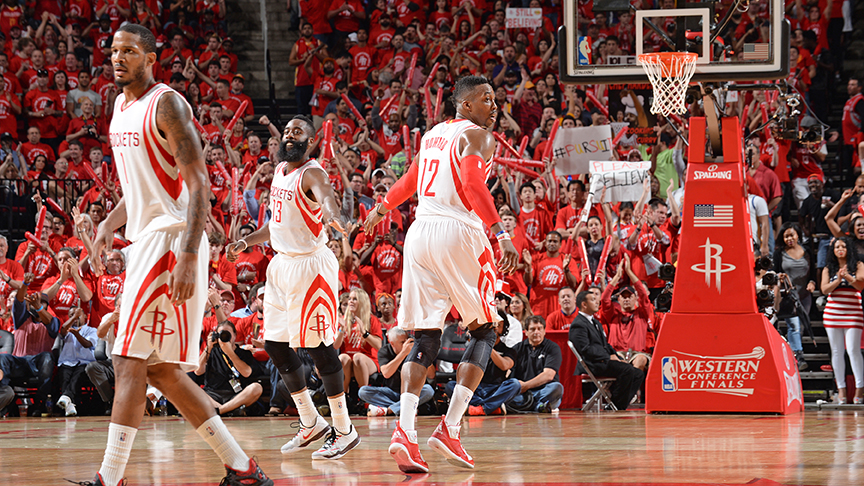 Jason Concepcion: What is it about these Rockets? What weird institutional personality trait could be responsible for this team’s postseason tendency to react to the knife at their throats with a yawn, and to only come fully awake and present once the knife actually begins sawing back and forth into their windpipes? Last round, against the Clippers, Houston turned in two desultory bags of rotting garbage, known collectively as Games 3 and 4 — which they lost by a combined 58 points — falling to 3-1 in the series. Then they reeled off three straight wins like they were alt-world doppelgängers from Dimension: Try Hard.

The difference this time, as you may have heard, is that no NBA team has ever come back from a 3-0 hole in a playoff series. What that means: Based on only the totality of human experience regarding the game of basketball, the Rockets are already lying in their graves, beloved family mementos held close, flowers splayed across their chests. Game 4, then, was merely some kind of postmortem response in which the muscles go rigid, the bodily fluids settle, and the 3-pointers gather like swarms of corpse flies. It is emphatically not the precursor to a truly historic comeback.

Sure, Josh Smith played like his jumper underwent various German blood-spinning techniques, hitting 3 of 4 from deep, only the eighth time (fourth this season!) in his 11-year career that he’s taken four or more 3s and hit at least 75 percent of them. I mean, yeah, James Harden was at his slithery best, scoring a playoff career high 45 points with nine rebounds and two blocks. And, OK, fine, the Rockets came out at roughly the melting point of iron, hitting 10 of 15 3s in the first half and 8 of 9 in the first quarter, and have now survived four elimination games this postseason.

These things are flukes. Noise in the transmission. There’s no way they come back to make this a series. I feel as sure of that now as I felt when they went 3-1 down to the Clippers. 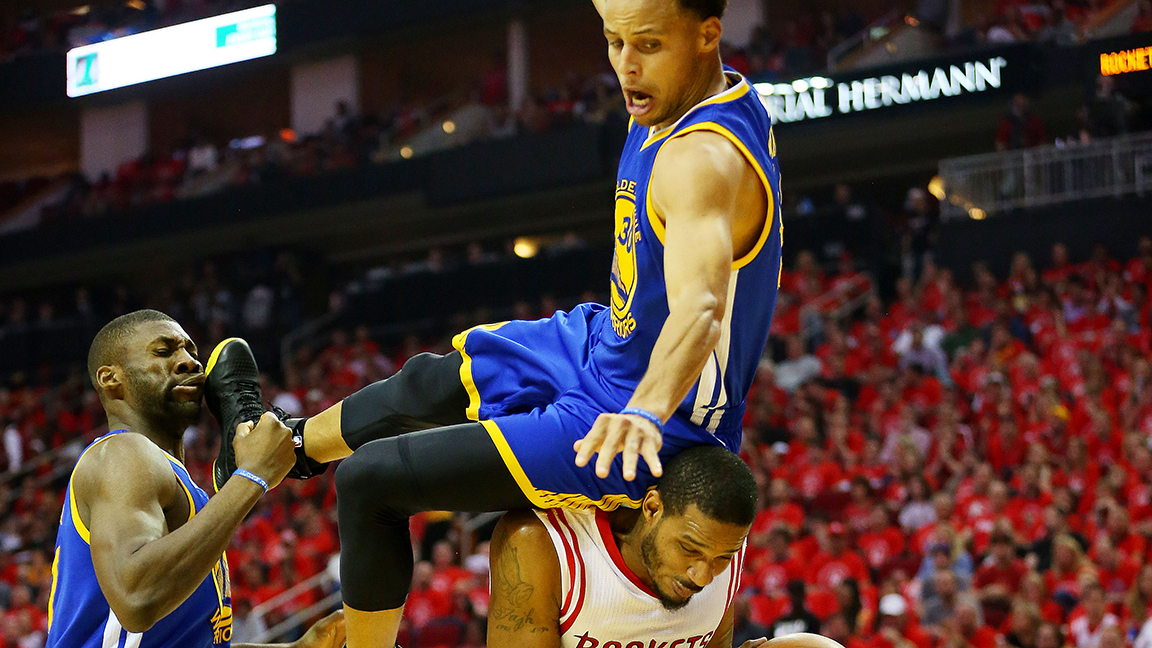 Danny Chau: It can be hard enough trying to recount the anxieties you felt last week, let alone three years ago. When Stephen Curry went down hard, slamming the back of his head into the hardwood after biting on a Trevor Ariza fake around the rim in the first half, it felt morbidly inevitable. The playoffs have been an indiscriminate reaper, and it was only a matter of time before the Warriors, the only postseason team remaining with even a remotely healthy roster, met the touch of the scythe.

It was a horrifying reminder of just how lucky we’ve been to watch this Warriors team operate at max capacity for the entire season, and how lucky we’ve been over the past three seasons to watch Curry grow into his MVP form. The media narrative of “unlikely MVP” largely stems from his figure: He is the un-LeBron, someone who has attained a way of dominance in spite of his waifish physique. But maybe, at least subconsciously, there was some sort of tacit understanding that, in an alternate timeline, Curry’s build serves as a career-threatening curse, rather than a Davidesque hidden advantage. Following offseason ligament surgery on his right ankle in 2011, Curry reaggravated his ankle injury in three of the Warriors’ first six games of the 2011-12 season (Curry suited up for five of those games). He played only 26 games that season. At the time, it felt like a modern adaptation of the Grant Hill tragedy that altered the course of the NBA’s early aughts. In the three seasons since, Curry has suited up for 236 of 246 regular-season games (96 percent). It’s been a blessing.

Curry played nearly 18 minutes in the second half, including all of the fourth quarter. It might’ve been the most stressful viewing experience of the series, which is incredible considering the Rockets were comfortably ahead for most of the game, out-Warriorsing the Warriors with their improbable shotmaking. Golden State is claiming that he’s fine, and so is Curry. “It’s all minor stuff compared to how it looked,” he said after the game. Maybe so, but recent history has not been kind to Derrick Rose and Kevin Durant, past MVPs who have seen their own worst-case scenarios unfold. Overreacting in the moment just feels safer; we hyperventilate now in hopes that we won’t have to hold our breath later.