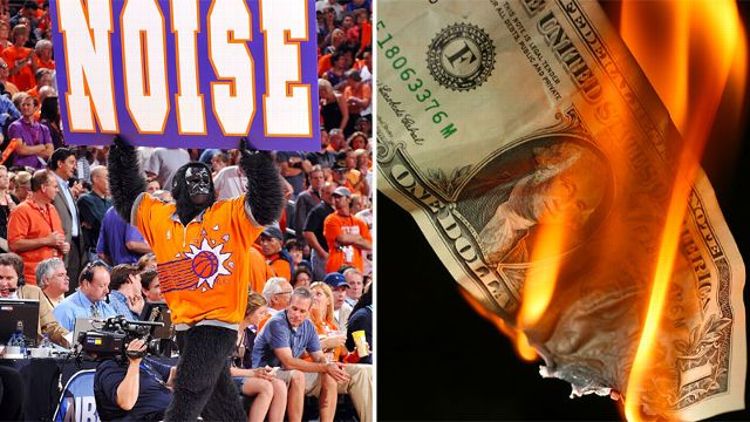 Happy days are here again! My Scrabble Friend and I went on a run this week thanks to the Phoenix Suns, who have gone undefeated against the spread this year. We have bet and will continue to bet the Suns until Vegas throws out a scare line like Pho (+2) @ OKC, at which point we will sigh deeply, say a prayer to the God of Repeated Mistakes, and keep betting the Suns.

Our lucrative Suns streak was mostly an accident. My Scrabble Friend and I are in a salary cap fantasy league and he has built his franchise around Eric Bledsoe’s $2.6 million salary. When he’s not watching StatTracker or trying to convince the other owners in the league that Wesley Johnson has finally arrived, My Scrabble Friend plays a franchise in NBA 2K14 with the Suns, mostly because he wants to generate fake fantasy lines and dream of how cool it would be if Bledose could take 52 shots a game in real life. Anyway, because My Scrabble Friend is a fellow Dumb Asian who was academically encouraged by his well-intentioned yet still-racist teachers, he has the ability, common among gamblers and sociopaths, to convince himself that his stupid ideas are actually great ideas. This is how we found ourselves betting every Suns game.

MY SCRABBLE FRIEND: Dude, I just scored 58 points with Eric Bledsoe in my Suns franchise.

ME: I just dished out 18 assists with Rich Homie Kang, all to Nerlens Noel.

MY SCRABBLE FRIEND: You pass in NBA 2K14?

ME: I’m trying to become a better person.

MY SCRABBLE FRIEND: I think the Suns are really good if Eric Bledsoe scores 58 points. Want to put them in every parlay?

ME: Sure. Have you tried this strain called Girl Scout Cookie?

MY SCRABBLE FRIEND: We are both in our thirties.

It’s been a weird year for gambling on the NBA. The Suns, Sixers, and Magic, the three worst teams in our NBA preview, have combined for an 18-7-1 record against the spread this season, inspiring some weird lines. The Sixers, apparently coached by Boo Williams, have consistently registered over/under lines over 200 points, regardless of opponent, but still have managed to hit the over in six of their nine games.

In most years, the prudent bettor would look at these hot-starting bad teams, wait till the lines adjusted a little and go hard the other way. I think this is probably a good strategy with the Sixers, who are the NBA’s version of a flush draw in poker. Once every three games, all their component parts will rattle together like a Voltron built entirely out of 1991 Ford Tauruses (James Anderson still drives one. I know this because I drafted him and his sub–$1 million salary in the fourth round of our salary cap fantasy draft) and they will do something crazy like score 114 points against the Heat.

The Suns are something different. They have been a goddamn basketball revelation this season. According to the betting site TeamRankings.com, the Suns have played the sixth-toughest schedule in the league. They have beaten the Blazers, the Jazz, the Nuggets, and the Pelicans twice and played tough games against the Spurs and Thunder. Like many of the bad-on-paper, maybe-tanking teams in the NBA this year, the Suns have been running a lot. Their 19.7 percent transition rate leads the league by a pretty healthy margin, per Synergy Sports. (The Sixers are second at 18.1 percent.)

The Suns also have been remarkably good on defense, considering they start Channing Frye and give significant minutes to Gerald Green. Their 0.866 PPP allowed ranks fifth in the league. It’s early, sure, but it seems pretty reasonable to say at this point that Phoenix’s athleticism and speed might be enough to get them to 35, maybe 38 wins.

Denver is 1-3 against the spread at home this year. Too much is made of “the air in Denver” and how it gives the Nuggets a massive edge. Ty Lawson eats Chipotle every day, according to Instagram, and JaVale McGee, well … you know. Last year, when Denver had healthy athletes and George Karl, the amount they ran probably did get teams winded by the fourth quarter. This year? They’re a bunch of kinda pudgy guys who play Pokemon in the locker room and are headed for 30 wins. Minnesota wins this game by 10 at the least. Bet the Wolves and put them in all your parlays.

If I were to blind-guess this line, I would have said the Bobcats were a one-point favorite on the road against the Cavs. The fact that Cleveland is a 6.5-point favorite against any team in the NBA is a fucking mystery of the universe. Aside from a two-point victory against the Sixers on the second night of a back-to-back/home-to-home, the Cavs’ recent schedule has looked something like this: a 15-point loss to the Sixers, a 15-point loss to the Bulls, a 29-point loss to the Wolves. Given Dan Gilbert’s, uh, moxie, these Cavs aren’t going to throw their hat into Hari-Kari for Jabari (trademark pending), which means they’ll probably just keep doing what they’re doing until Mike Brown becomes the only coach in NBA history to get fired before the All-Star Game in consecutive seasons or Kyrie Irving starts to seriously consider a career in show business (his pitch: “The Wire, but in Cleveland. Jordan Cameron can play McNulty and I’ll play Uncle Drew AND Omar”) because honestly anything is better than this.

This is Anthony Bennett hitting the panic button on himself. After the final buzzer of a 29-point loss, Bennett decided to do this.

The Lakers are old and weird, but “Six Seconds or Whatever” has played well at home, putting up a 4-1 record against the spread. The Grizzlies have been the league’s second-worst team against the spread this year (in 30th place, of course, are the Cleveland Cavaliers) at 1-7 overall, 0-3 on the road. +140 is enough value here to take the Lakers, but this should be one of those games you bet on, but never, ever, ever watch.

Week 11 NFL Viewing Guide: This Is What We've Waited For