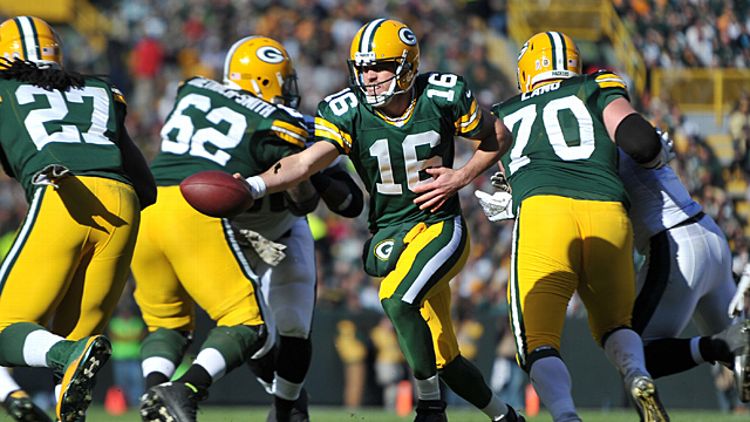 Percy Harvin will score against his former team (+160) (Must play to count!)

This is a statement game for the Seahawks. They are a very quiet 9-1 with uncharacteristically close games at home in the last month against Tennessee and Tampa Bay. It’s right about this time of year when they send a message that they’re not only to be considered an elite team — but untouchable at CenturyLink Field. Of course, this could all just be a conversation going on in my perpetually semi-concussed head. Seattle paid Harvin $67 million to so far not catch passes for them. You can be sure they’ll be looking to start getting their money’s worth this week. Still investigating whether this bet cashes if Harvin returns a Christian Ponder pass to the house.
10,000 jermajesties

Scott Tolzien to throw over 1.5 TD passes vs. Giants

It’s hard to believe the Giants are getting to face a backup quarterback. Oh, wait a minute — no it’s not. Feasting off second-stringers is exactly how they’ve surged back into the NFC Least division race. Freeman, Barkley, a gimpy Pryor, and now practice-squadder Scott Tolzien. It seems like their silver-platter season continues — but not so fast. Tolzien is a gamer who’s not afraid to sling it. He immediately got into an offensive groove with Jordy Nelson and Jarrett Boykin. The Wisconsin alum completed 24-of-39 passes for 280 yards and a touchdown just days after vacuuming up powdered hush puppies at Denny’s. Green Bay coach Mike McCarthy didn’t hesitate to name him the starter. He believes in Tolzien and so do I. So say my 15,000 jermajesties.

New England to score over 23 points vs. Carolina

Bill Belichick’s Patriots are 9-1 over the last 10 years when coming off a bye. From 2010 to 2012, New England is 23-1 in the second half of the season. Let’s also not forget that they dropped 55 on Pittsburgh before getting to rest for two weeks. The Panthers defense lets up after the hangover game in San Francisco. In a couple of weeks the Pats over/under will be 30 for the rest of the year. Take advantage of this bargain number now. 30,000 jermajesties

I don’t know why I’m doing this; I think I’ve proven my point about how three-team teasers are like the devil relieving himself on your head every week … and yet I’m salivating at the chance to make another.

Washington (+14) over Philly
The Eagles have lost their last 10 in Philly. They like coming home less than Don Draper. RG3 is fresh off his best statistical game of the year. The Redskins get revenge from the opening week drubbing by staying within two touchdowns for my benefit only.

Denver (+2.5) over K.C.
My Cliff Clavin full-of-shit team of 2013, the Kansas Chiefs, doesn’t have enough firepower to compete with Peyton Manning’s masterful underneath game. Might be a different story on December 1, when they meet up in K.C. — but this Sunday night, it’s all Denver.

Colts fans/bettors ground coach Chuck Pagano over/under 2.5 weeks for leaving the back door open last night against the Titans (+3 or +3.5, depending on when you jumped on it)

I would love this trick play so much more if it weren’t pulled off by Jada Pinkett Smith’s nephew. The rich get richer. Seriously — no one on defense moves? No one?!?! Incidentally, Halle Berry’s brother, Mr. Roto Matthew Berry, has Pinkett on six of his 18 high school fantasy football squads.

1200/1 odds JARHEAD, 4 RICKY, and ROSEAL eventually come to their senses and split the first-place prize for winning the Las Vegas Hilton Supercontest with me and Joe House

Those are the only entries (out of 1,034) ahead of us. And it’s only fitting, in light of the fact that House and I are hopeless glutinous pigs, that I initially typed the word “entrées” when I meant “entries.” This week’s Farce Five: Seattle -12.5, Pittsburgh +2.5, Cincinnati -5.5, Washington +3.5, and Baltimore +3.

3/5 odds that asking my wife, who is eight months pregnant, if I can go see my pals Alec Scheiner and Mike Lombardi’s Browns play the Jags on Thanksgiving weekend when her brother and family are in town results in a long, dragged-out California divorce

And that’s just the asking part! When I actually end up going to Cleveland, there will undoubtedly be an Elin Nordegren–esque clubbing to follow.

The most shocking aspect of Bowe’s marijuana arrest is that he was accused of having POSSESSION … of anything! That joke is dedicated to all the other Dwayne Bowe fantasy owners who have had to suffer through his two-touchdown, sub–400 yard receiving season. Ahh … the performance-diminishing drugs.

Move over, Mike Tyson. You are no longer the heavyweight champ of the salaciously bizarre interviews.

You are a very special player, Trent Richardson. It’s not often a blue-chip college running back averages more sex partners than yards per carry.

@TheCousinSal So if you're Walter White, who's drink in the Cowboys' organization gets the "Stevia" treatment?

A perceptive Walter White would see that Stevia is too easy a way out for this incompetent group of staffers and that the hidden-machine-gun-in-the-trunk trick would be the more fitting ending. Although he’d have to be careful wheelchair-bound Old Man Kiffin doesn’t tip the other bad guys off with his incessant bell-ringing.

@TheCousinSal Hilarious when you called @BillSimmons an #NBA-hole. Finally, somebody said it.

Maybe I’m being too harsh on the Sportsish Guy. After all, if Simmons’s boyfriend/muse/soul mate Russell “Wussell Hustle and Bustle Man Muscle” Wilson can put up with his overwhelming love of professional basketball, why can’t I? Giannis Antetokounmpo!!!

@TheCousinSal please bet the giants to win the division. It's the only way to stop them

Don’t you dare tempt me, Brad. When it comes to real wagering, I’m more in the red than Tom Coughlin’s rubescent blizzard face.

@TheCousinSal thanks for the Colts 2nd half fat boy. Rather let my kid follow Sandusky into a locker room shower than follow ur shitty pics.

I need to know — did you mean “fat boy” or “half fat boy”? Because the former are fist-fighting words. And of course it figures the Colts second-half bet made a triumphant return Thursday night when I didn’t touch it. Is mini baccarat this much fun? I may switch.

FYI, to help change my prognosticating luck, I plan on watching the entire 10 hours of NFL action while holding the Jack Be Nimble pose. I recommend you all do the same.