Frog and Toad (and Montee Ball) 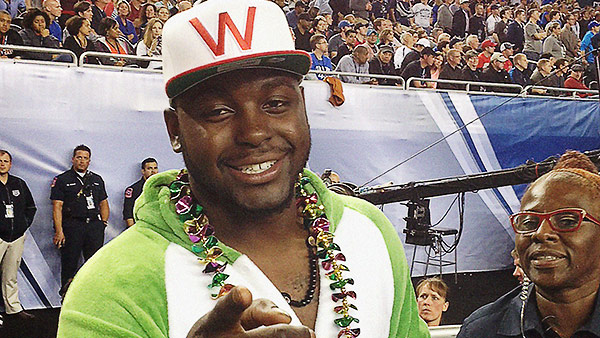 On the one hand, it’s hard to muster much outrage over security denying Montee Ball entry into Wisconsin’s student section for Saturday night’s Final Four matchup against Kentucky. The current Denver Broncos running back and former Wisconsin star was clad in a full-body frog suit, and rules are rules: Article 247.09 of the Texas Revised Code explicitly states that “amphibians of any kind are not permitted to attend college basketball games.” (It has something to do with their filthy habitats detracting from the purity of amateurism.) End of story. You can look it up.

On the other hand … surely the powers that be could have made an exception for the NCAA’s all-time touchdown king, right? It’s a long, long way from the swamplands of Lake Michigan to Arlington, and yet Ball leapt that entire distance to support his alma mater, sacrificing a whole week of mating season in the process. It seems as though the security team at Jerry’s World could have been sympathetic to Ball’s predicament — frogs don’t ask to be frogs, after all — and, particularly given his celebrity status, kindly allowed him to sit among his fellow Badgers. Right? WRONG!

So these 3 guys are trying to get into Wisconsin student section without a wristband. Students chant "let them in." pic.twitter.com/9ITvetwQDy

It's Montee Ball in the green! RT @APMarkLong: Denied! Even though someone slipped them wristbands. pic.twitter.com/aVYMGDVBoB

So let me get this straight: A tiger, a cow, and the NFL’s only active frog traveled to AT&T Stadium for the Final Four, only to be kicked out by some glorified mall cop for failing to wear wristbands? Um, tigers, cows, and frogs don’t have wrists, buddy. This is like ejecting humans for failing to wear antlerbands. Truly discriminatory stuff.

Either this particular security guard is utterly depraved, or John Calipari hired an operative to “take care of” Wisconsin’s animal alliance, fearing these creatures might intimidate his team into submission. If any huskies get slaughtered before tonight’s game, we’ll have our answer.

Heart broken.. But always a badgers! Fun to watch!