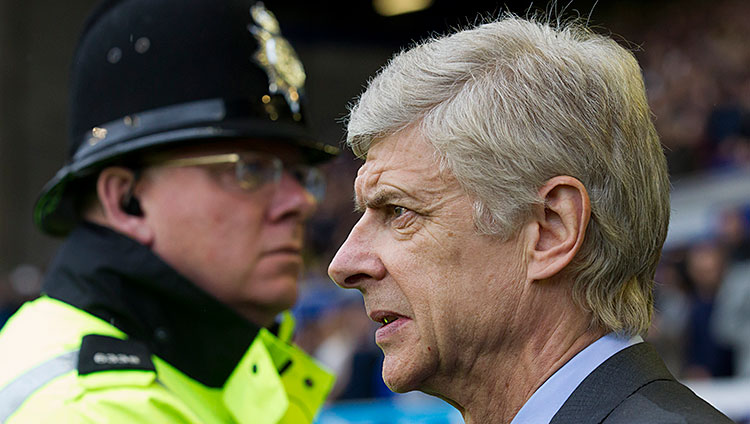 Chris Ryan: Depending on how much you want to believe in mythology, Arsene Wenger invented sleep and vegetables and passing on the ground. He came to England from France, via Japan, and revolutionized the game, turning Arsenal from boring bank guards into swashbuckling, counterattacking Anglo-Franco pirates. Arsene Wenger invented Thierry Henry and Dennis Bergkamp and Patrick Viera and Cesc Fabregas and Robin van Persie. He got Tony Adams off the sauce, moved the Gunners from Highbury to the Emirates and kept them in the Champions League the whole time, and somewhere along the line he invented going undefeated, too. He was invincible.

And on Sunday Roberto Martinez tactically pulled his pants down on international television.

Wenger is 64 and at the end of his contract. In the last two weeks, we’ve seen him completely tactically outmaneuvered by Martinez (Everton) and Jose Mourinho (Chelsea), to a scoreline of  9-1. Soccer is certainly a game of systems, and Wenger has a lovely one, but it is also a game of adjustments. More and more, the top managers in the game are those that can tweak their approaches on a match-to-match, half-to-half, minute-to-minute level. Wenger doesn’t do this. He sticks to his guns and his guns are empty. Where a Brendan Rodgers salivates over the chess match of tactics, Wenger seems bored with the idea of playing chess all together. He seems bored with all of it; how else do you explain him chalking up Arsenal’s annual injury crisis to hair pills?

There is little left to cheer for at Arsenal this season other than a possible FA Cup. It would be Wenger’s fifth victory in the competition. Were he to win it, it might be a perfect opportunity for him to invent his exit from Arsenal.

Mike L. Goodman: Steven Naismith has spent two years at Everton being chronically misunderstood. Then, on Sunday, he did this.

Naismith came to Everton at the start of the 2012-13 season on a free transfer, thanks to his former club, the once great Rangers, going bankrupt. He was also finishing his recovery from a ruptured ACL. So here comes a Scottish player with a messed-up knee on a free transfer, everybody get excited! And then, instead of playing as a second striker, where he’s most suited, he proceeded to play as a winger under David Moyes, and as a winger or emergency striker under Roberto Martinez. He was basically the annoying guy the manager put in instead of the more exciting players like Kevin Mirallas or Gerard Deulofeu.

Naismith has old-man game. He’s 27, but could be 40. Any pace he may have once had is long gone after the knee injury. He’s an inaccurate passer. He’s about as nimble with the ball at his feet as Beco the elephant. The things you expect from a creative player? He doesn’t do those. Moyes liked him because he diligently tracked back and didn’t shirk defensive duties (it’s probably the least shocking fact in history that David Moyes favored a disciplined Scotsman with a strong defensive work-rate and a paucity of flashy skills). But Naismith does something else, something that gets overlooked, something that both Martinez and Moyes have used in different ways. Naismith, for all his faults, knows how to get to the right spot.

It’s no accident that his opening goal on Sunday saw him pouncing on a rebound; or that he magically found himself kinda, maybe, but not quite called for it, screening the goalie from an offside position on the second goal; or that it was his run that created the loose ball that led to the third. Naismith gets into good positions. Now, what he does in those good positions often involves an errant pass, or a stone-footed first touch, but enough of the time it also involves actually scoring a goal. Sunday’s was his fourth in limited minutes, giving him a perfectly respectable (especially for somebody who seldom plays as a striker) 0.35 goals per 90 scoring rate. He knows where to be, even if physically he can’t always, or maybe even often, take advantage of it.

That’s why watching him play on Sunday, as more or less a false 9, was kind of awesome. The role is generally reserved for the trickiest and most skillful of players, and there was good ol’ reliable Naisy. It worked to perfection, as Naismith dropped into spaces, and Romelu Lukaku rampaged ahead of him from the right, and Mirallas from the left. It was an unexpected tactical wrinkle, one which Arsenal were completely unprepared for, and one which has propelled Everton firmly into the Champions League discussion.

Steven Naismith finally had his day in the sun. Hopefully it didn’t harm that Scottish complexion of his too much.

Oh, and completely unrelated to Naismith, but just because it was that kind of day for Everton, here are two awesome things that rightback (rightback!!) Seamus Coleman did. 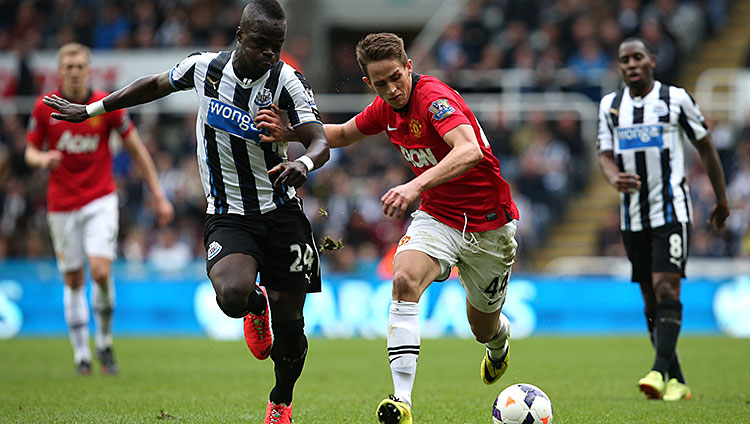 Ryan O’Hanlon: For everything Manchester United’s been this season — a polar vortex of frozen talent development, confirmation that Sir Alex is the Illuminati eye — “fun” is not one of them. “Funny,” to everyone outside of the red half of Manchester, yes. But as far as achieving anything remotely aesthetically pleasing, the “Hope we have enough good players on the field” plan A and the “Make crossing the new Pavlovian bell” plan B haven’t quite worked out.

Well, until the 17th minute at St. James’s Park on Saturday, when Ashley Young dislocated his thumb and David Moyes subbed on Adnan Januzaj, the baby giant, to carry Juan Mata, Chicharito, and Shinji Kagawa on his shoulders to a 4-0 win.

Chicharito perpetual-motion-machine’d around. (He doesn’t pass or dribble, so much as hit the ball with his speeding body.) Mata again looked like that ninth-grader who’s way better than everyone on varsity, scooping in a free kick and teeing up Januzaj with a lunging backheel. Kagawa should’ve had two assists, but played a full 90 minutes, which is currently a sad victory in itself. And Januzaj, the 19-year-old Gumby on roller skates, slid in and out of space, scoring one of those goals — a quick snap-shot that turned a tough angle into a straight line — that are becoming a trademark.

Brett Koremenos: Last season, Michu rivaled any striker in the Premier League when it came to entertainment value. His ability to sneak past defenders and put away balls into the box with pinpoint headers made it seem like some 14-year-old was just jamming on the shoot button in a real-life game of FIFA. Add in some crazy, physics-defying strikes with his magical left foot, along with his dope “I can’t hear you” goal celebration and Michu became must-watch football. He was fun, and so too was Swansea.

This year, neither the player nor the team have been exciting. The Swans’ loss to Hull on Saturday kept them in the thick of the relegation dogfight, and their cup and European campaigns went nowhere. Because of his bum ankle, Michu, even when he’s been on the pitch, has been equally uninspiring. His scoring rate has dipped from an impressive 0.54 goals per 90 minutes last season to just 0.42 in only 1,286 minutes on the pitch so far this year.

After his most recent stint on the sidelines due to his injured ankle, Michu finally made made it back to the Swans’ starting XI. Playing in the hole behind Wilfried Bony, the gangly Spaniard looked pedestrian before being subbed off for Pablo Hernandez in the 66th minute. Usually so graceful in his movement on and off the ball, Michu labored through his time on the pitch against Hull. His final stats — a 57 percent pass completion rate, no goals or chances created, and one measly shot on target — reflected the performance. It felt empty watching one of last year’s most entertaining and productive players look so ordinary.

Despite all the other fascinating things going on in the Premier League right now, I still find myself hoping for the return to form of the long-limbed Spanish assassin. Get well soon, Michu. You are missed.

Frog and Toad (and Montee Ball)