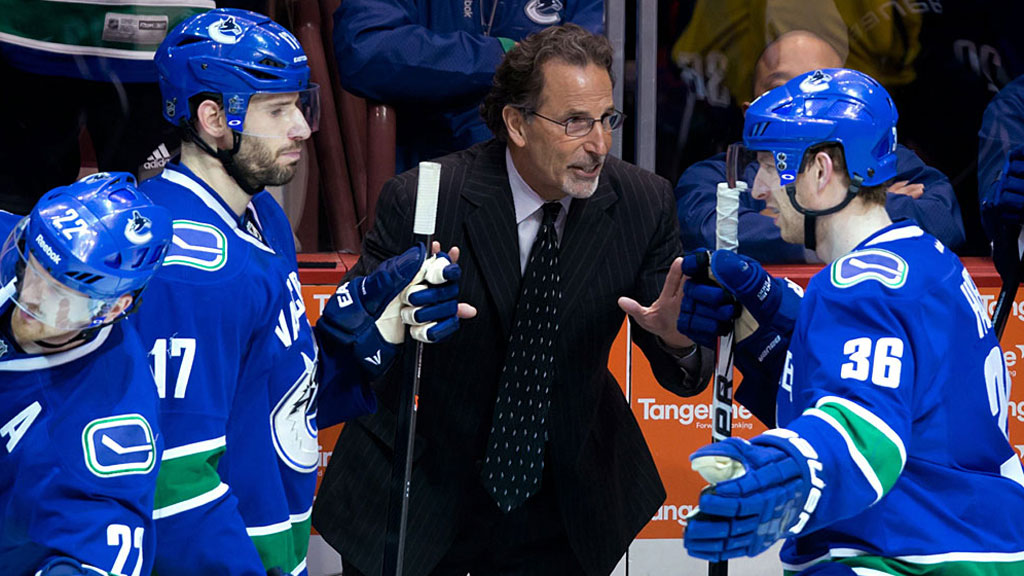 Each Monday, we’ll wrap up three of the biggest stories from the weekend and discuss how they’ll play into the coming week.

Here’s a quick summary of the last 12 months in Vancouver: a first-round sweep at the hands of the Sharks; a coach firing; the trade of their star goaltender; a reasonably decent start to the regular season; a terrible second half; injuries aplenty; one ridiculous brawl; the trade of their other star goaltender; a trade request by one of their best players (which went unfulfilled); and, any day now, officially missing the playoffs for the first time in six years.

So, after all that, how do they close out the show’s final act? Well, could I interest you in a good old-fashioned passive-aggressive battle between the coach and GM? That’s what played out this week, as general manager Mike Gillis and coach John Tortorella took turns firing shots at each other. Sort of. Maybe. If they did, they were actually kind of polite about it. This is how turf wars play out in Canada, after all.

Gillis took the first swing Thursday, when he told a Vancouver radio station that he didn’t like the style the team played. That was widely interpreted as a dig at Tortorella’s defense-first approach, an impression that wasn’t helped when Gillis replied to a question about Tortorella’s job security by saying that “everyone’s open for evaluation.”

Tortorella got a chance to respond the next day, and for the most part he took the high road, telling reporters that he and Gillis had a “fantastic” relationship and were on the same page. But he also attributed some of the Canucks’ woes to a lack of depth in the lineup, which could be seen as a rebuke of Gillis’s work if you’re the sort who likes to assume the worst from people. (Which, for the purposes of stirring this controversy, we will assume you are.)

The whole thing may be overblown, but there’s little question that both Gillis and Tortorella are on shaky ground, and Canucks ownership will ultimately have to sort this all out once the season ends. It seems unlikely that both will keep their jobs, and if only one stays, then right now the odds are that it’s Gillis.

Oh, the Canucks did play a game last weekend, if you’re interested in that sort of thing. They hosted the Kings on Saturday night, and rode a pair of third-period goals to a 2-1 win. Eddie Lack outdueled Jonathan Quick to snap a personal three-game losing streak, and Brad Richardson scored the winner with under 90 seconds to go.

It wasn’t an especially meaningful game for either team — the Canucks aren’t making the playoffs, and the Kings are locked into third place in the Pacific and have essentially nothing left to play for during the regular season. But a comeback win over a legitimate contender could still provide some small measure of optimism for Vancouver’s brain trust going forward. Whoever that happens to be.

Speaking of Canadian teams that may be on the verge of imploding, let’s turn our gaze a few provinces over, where the Winnipeg Jets are closing out another disappointing season. They never did get especially close to the playoff race, and barring a late surge they’ll be drafting in the top 10 again in June.

The Jets faced the Maple Leafs on Saturday night in a game that will probably rank among their most-watched of the season, albeit mostly because it had the potential to end Toronto’s long-shot playoff hopes. They came through with a solid effort, overcoming an embarrassing early goal to earn a 4-2 win in a game in which they dominated possession for long stretches and out-shot the Leafs 41-25. The news wasn’t all good — Dustin Byfuglien left the game in the second with an upper-body injury and did not return — but for a team with little left to play for, it was an admirable effort.

Results aside, the big news from the Toronto game was the absence of Evander Kane, who was a healthy scratch despite coach Paul Maurice’s earlier assurance that the Jets would be icing their best possible lineup. After the game, Maurice confirmed that the decision was his call, but wouldn’t provide any further detail.

It was just the latest controversy for Kane in Winnipeg, where he’s been criticized for everything from his photographs to his restaurant habits to his haircut and, most recently, an alleged assault. Most of that is on him, of course, given that he doesn’t come across as an especially mature young man at times. Then again, he’s only 22 years old, and more than a few young NHL stars have been allowed to make a mistake or two without calls for them to be run out of town. Whether that ends up being Kane’s ultimate fate in Winnipeg remains to be seen, though things sure seemed to move another step in that direction over the weekend.

Kane isn’t the only Jet being fitted for goat horns as the season winds down. Goaltender Ondrej Pavelec is finishing up an average year by his standards, which is to say a bad one by those of most other starters. He’s currently sitting with a save percentage of .901, which would mark the fourth time in his five seasons that he’s finished between .900 and .906. (He finished at .914 in Atlanta in 2011.)

Both the save percentage and his 3.01 GAA rank outside the league’s top 40, and for the first time, you get a sense that patience may be running out in Winnipeg. His name has recently surfaced as a possible offseason compliance buyout victim, and this fan-made infographic makes a pretty strong case that it would be the right move.

Of course, that would leave the Jets without a starting goaltender. If only there were a nice young Manitoba kid who was going to be available cheap in the offseason. Hmmm …

Let’s play a game of Choose Your Own Narrative.

The Chicago Blackhawks are the NHL’s defending champions. But like so many defending champs before them, they just don’t have that extra gear this year. Thanks to fatigue and complacency and the relentless grip of the salary cap, last year’s Presidents’ Trophy winner has been replaced by a warmed-over version that’s struggled to so much as climb out of third place in their own division. They’re exhausted and beaten up, with their two best players out for at least the rest of the regular season. And now, they’re staring down a first-round matchup with the Colorado Avalanche, a younger, hungrier club that must be salivating at the chance to end the Blackhawks’ mini-dynasty once and for all.

The Chicago Blackhawks are the NHL’s defending champions, and they know what it takes to win. While other teams scramble over playoff seeding and home-ice advantage, the Blackhawks are content to wait patiently for the real season to begin. They’ve shut down their stars because they know that you don’t win championships in the regular season. Instead, they’ll aim to enter the playoffs relatively healthy, reasonably rested, and ready to stare down a wide-eyed bunch of Avalanche kids who’ll probably just be happy to be there.

So, which version do you like? For their part, the Blackhawks spent the weekend moving the needle toward option no. 2, thanks to victories over Columbus and St. Louis. The former came on Friday against a Blue Jackets team that was desperate for points. They seemed set to earn at least one for reaching overtime, but Ben Smith’s goal with just three seconds left in regulation gave the Blackhawks a 4-3 win and stunned the Columbus fans.

Sunday’s Chicago win wasn’t quite as dramatic, but it was more impressive, as they beat the conference-leading Blues 4-2. It was a tight contest that saw the Blues close to within a goal with two minutes to play before Smith clinched the game with yet another goal in the dying seconds, this time into an empty net.

So it sure seems like the Blackhawks are back. Or maybe the weekend was just the last gasps of a team about to be put out to pasture. At this point, your guess is as good as any.

Just remember, we won’t know the correct answer until the first round plays out, and we all retroactively agree on which narrative was right all along.

• The loss to the Blackhawks capped a rough weekend for the Blues, who also lost to the Avalanche on Saturday in a game that featured plenty of bad blood.

• The Blue Jackets recovered from Friday’s tough loss to crush the Islanders on Sunday by a 4-0 final. That win all but eliminated Toronto, and even briefly moved Columbus into a tie with Philadelphia for third place in the Metro. (The Flyers beat the Sabres 5-2 later in the night to reclaim the lead.)

• The Devils kept their slim playoff hopes alive with a pair of wins, beating the Capitals 2-1 and the Hurricanes 3-1. They trail the Blue Jackets by three points for the final wild-card spot, with both teams having four games left to play.

• The Capitals rebounded from that New Jersey loss to beat the Islanders on Saturday. They’re still mathematically alive but are realistically out of contention, which means talk will now turn to whether they’ll fire Adam Oates or trade Alexander Ovechkin.

• The Stars dropped a 3-2 decision to the Panthers on Sunday, missing a chance to put some space between themselves and the Coyotes. (Also, this happened.) Dallas leads the race for the final wild-card spot by a single point, and the two teams seem more and more likely to settle this in a head-to-head showdown on the season’s final night.

• The Senators faced the Canadiens for the first time since blowing a late three-goal lead to them in March. This time, they blew a three-goal lead early instead, getting a 3-0 start before giving up seven straight on the way to a 7-4 loss.

• The Penguins beat Colorado by a score of 3-2 Sunday night in a game that was more notable for who wasn’t playing. Facing a second game in two nights after Saturday’s 4-0 loss to the Wild, the Pens sat out Sidney Crosby, Chris Kunitz, Brooks Orpik, and Olli Maatta.

• The Sabres have wrapped up last place overall, though it’s worth remembering that this year’s new lottery rules mean they hold just a 25 percent chance of “earning” the top pick in the draft.

• At the other end of the standings, the Bruins are sitting in first place overall and will be the East’s top seed, and they looked sharp on Saturday in a 5-2 win over the Flyers. But one piece of bad news did emerge over the weekend that’s worth keeping an eye on: a report that they could be facing significant cap penalties next year.

• And finally, let’s all join hands, bow our heads, and take a moment to mourn the loss of Sean Couturier’s beard.