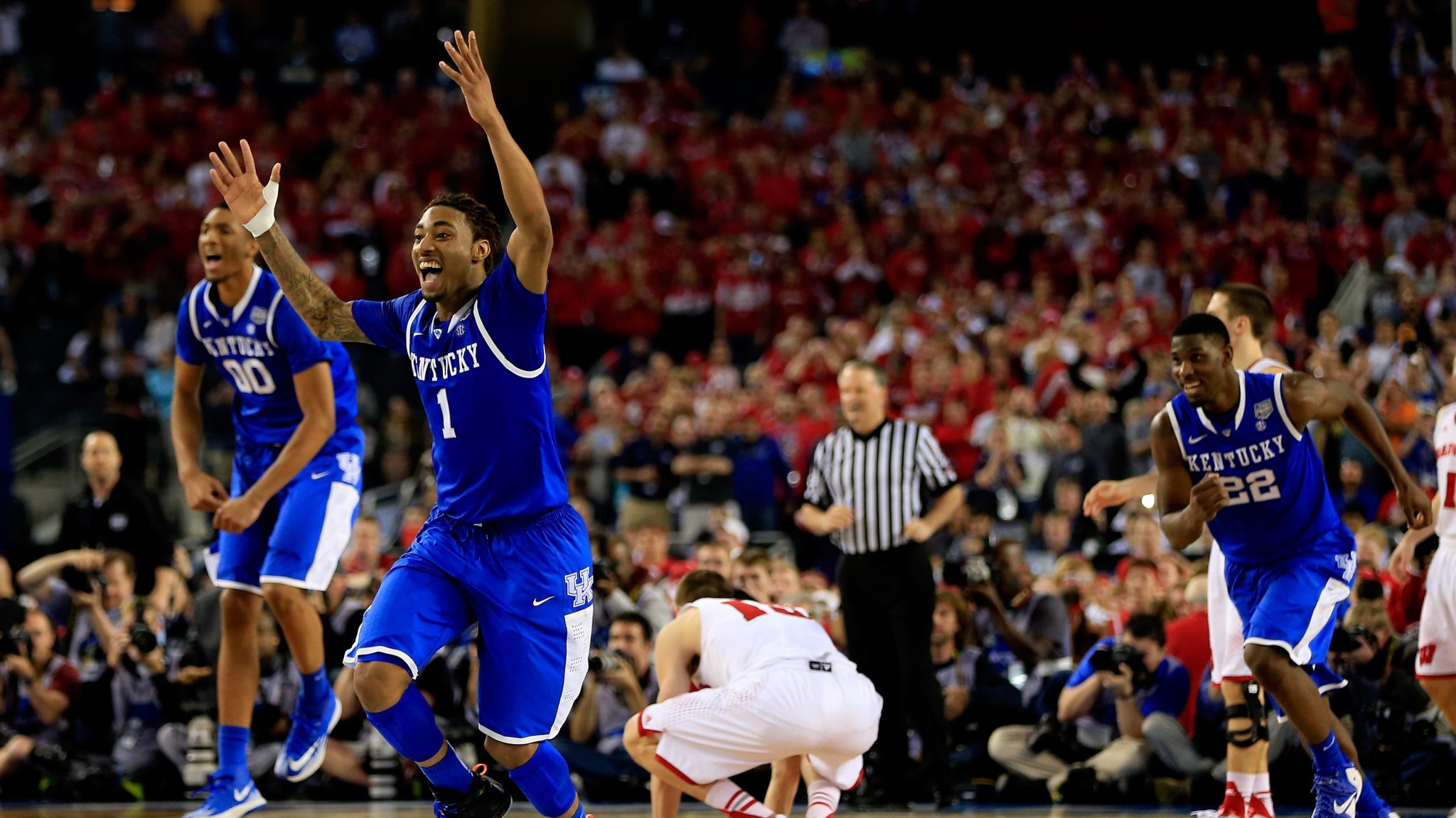 Kentucky is playing in the national championship game tonight, and a large chunk of America will probably be rooting against it. This makes sense in theory. We’re supposed to root against teams like Kentucky, because David’s more fun than Goliath, and because villains in sports make everything more fun.

But we need to talk about this before tonight.

As evil giants go, this team isn’t very convincing. Or more specifically … If you’re one of the people who thinks Kentucky is professionalizing college basketball, you should really watch more Kentucky games.

Take Dakari Johnson. He was in the locker room Saturday night, talking about the game winner against Wisconsin.

That’s how we got another game winner from Aaron Harrison, and another mind-boggling Kentucky win.

But seeing Johnson grin through that answer Saturday night was a reminder that he’s also just a giant 18-year-old kid. Too young to realize he’s not supposed to admit he was nervous, and didn’t really want the ball. Too young to play it cool. Instead he’s just chuckling and telling the truth.

That’s how this whole team feels right now. They are full of Dakari Johnsons, and nobody is playing it cool.

Earlier this week, John Calipari was talking about life at the team hotel: “They are all in this game room going crazy. Playing video games, doing the card thing, the card games with the spoons. You ever play spoons? They’re in there yelling at each other. I walk in and I’m like, I have 15-year-olds I’m coaching.”

On Sunday, the players were asked how much they slept the night before their Wisconsin game. “I got maybe five, six hours of sleep,” Aaron Harrison said.

“If I really told you,” Julius Randle added, “Coach would probably kill me.”

Then Calipari said they had one guy who got a good 10 hours.

“I kind of sleep through everything,” admitted James Young. “I just love sleeping.”

This is what’s great about the Wildcats this year. They’re humans. It’s different from the last time UK was here, with prodigies like Anthony Davis and Michael Kidd-Gilchrist convincing everyone they were supernatural. This team isn’t the terrifying juggernaut that makes you forget how young they are. It is a terrifying juggernaut that reminds you constantly how young they are. 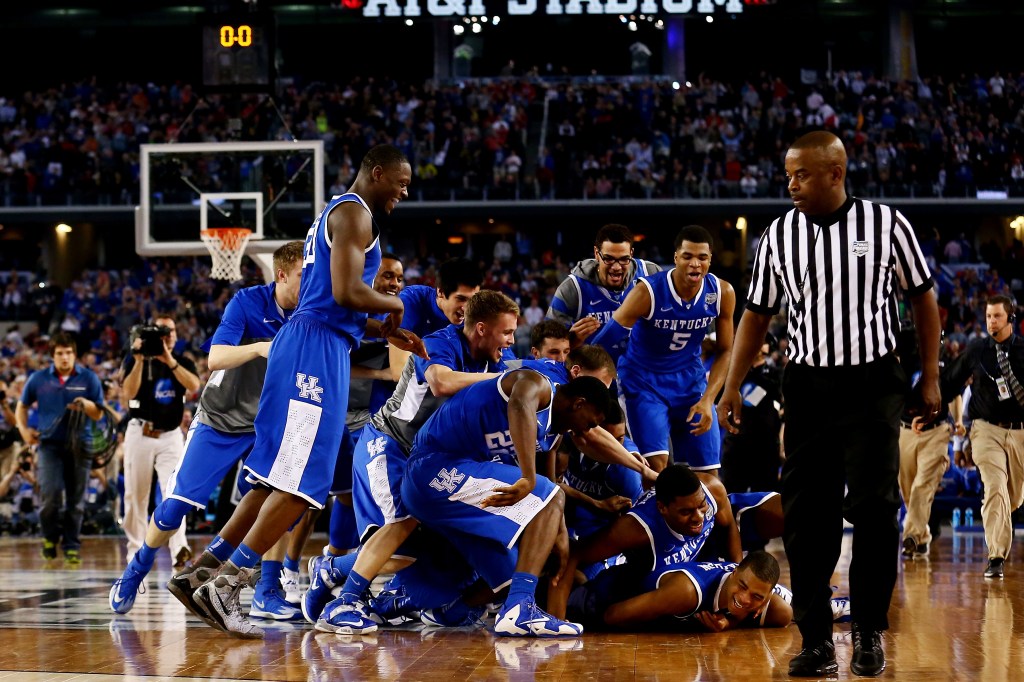 To really appreciate where this team is right now, you have to understand where they’ve been. In February, players were saying things like, “We all, all of our lives, have just been worrying about ourselves. When you put that group of people all together, it’s really hard. Coach said it’s impossible, really. So, I mean, we’re just trying to do the impossible and see where it goes.”

When “do the impossible” is used to describe team chemistry, it’s not a good sign for the future. But that’s how it felt. This was a team full of stars with NBA dreams, and getting everyone on the same page wasn’t going well.

Then came a loss at South Carolina, which put an exclamation point on the whole season’s disappointment. Calipari got ejected midway through the game, then didn’t show up for the press conference. At this point it became open season on everyone. The Harrison twins were public enemies no. 1 (and 2) for Kentucky fans, while Calipari and his band of selfish stars became a target for everybody else.

This came up again Saturday. “There’s constructive criticism and then there’s destructive criticism,” Cal said. “They got that [second] kind, questioning their attitudes. Are they good people? Are they selfish? I mean, they were absolutely mauled.”

The turnaround started at the end of the season. Before the SEC tournament, Calipari announced he’d made a “tweak” to the Kentucky team — what he did is still a mystery — and he promised the players their season wasn’t dead yet. That led to a run to the SEC championship game, which, if nothing else, secured its place in the NCAA tournament, avoiding the biggest possible embarrassment for this team of stars.

Then came the last few weeks. They beat an undefeated Wichita State, surviving performances from Cleanthony Early and Ron Baker that should have been enough to beat any team in the country.

They took down Louisville, the defending national champion, and another team whose upperclassmen (Luke Hancock and Russ Smith) would’ve been too much for most anyone to handle.

Then it was Michigan. Nik Stauskas and Glenn Robinson Jr. had Kentucky down double digits, but they couldn’t put ’em away, and Aaron Harrison’s 3 put Kentucky in the Final Four.

Then there was Wisconsin on Saturday night. The Badgers and Frank Kaminsky were a nightmare matchup for Kentucky — a team full of scorers who could spread the floor, milk the shot clock, and force every Wildcats player to guard them for the full 35 seconds every possession. For a team full of freshmen, this should’ve been disastrous. Kentucky mostly held up there, and it still looked like it wasn’t going to be enough.

When Traevon Jackson went to the line for three free throws to take the lead with 16 seconds left, I had no doubt he’d nail all three, and probably end the game. That’s how Wisconsin had played all game. It took every opening Kentucky gave it, and turned it into points. But then Jackson missed the first — the only missed free throw Wisconsin had all night — and gave Kentucky a chance to tie with a 2-pointer.

Calipari talked about the final sequence Saturday: “I called Andrew over and said, ‘Andrew, if you can get a layup or get it to Dakari, do that; if not, you got your brother.’

“When we huddled, I said, ‘We’re going at Aaron, boys, anybody got a problem with that?'”

And for anyone who remembers where Kentucky was a month ago, this took the most incredible redemption story in college basketball and made it just a little more ridiculous. Harrison was a curse word in Kentucky for most of this year. On Sunday, reporters asked Aaron how he felt knowing that families across the state were going to name their kids after him. 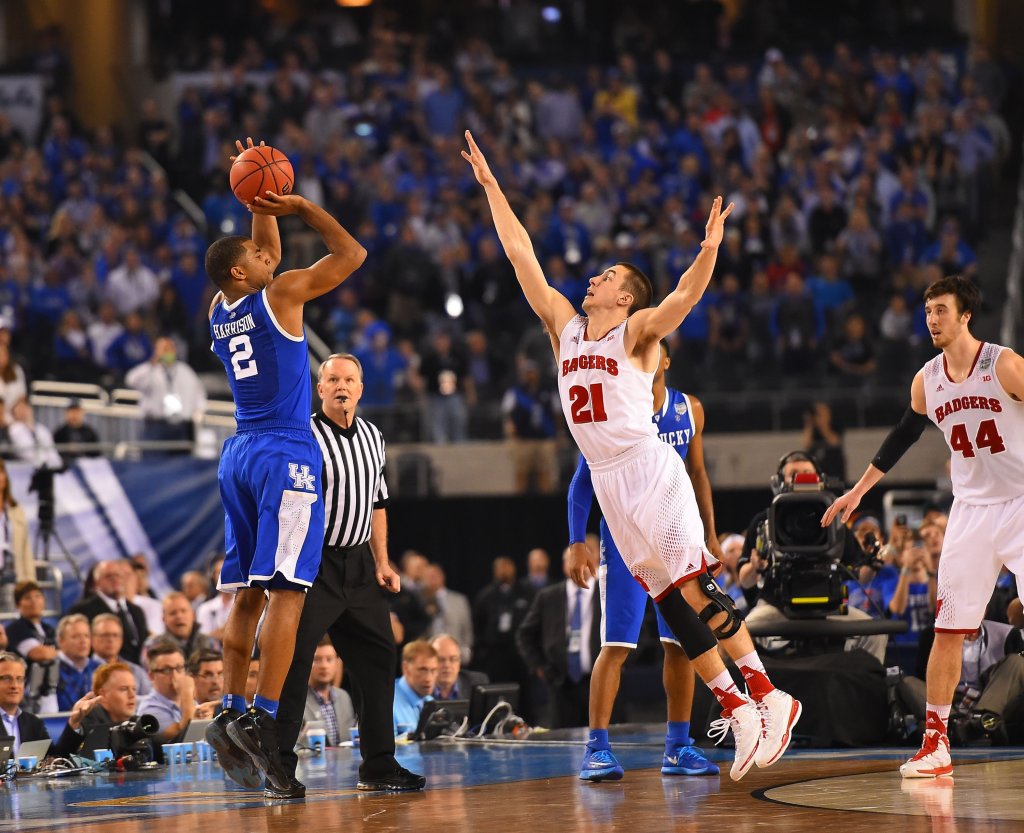 “It’s frustrating to lose,” Aaron Harrison said on March 1, the day of that South Carolina loss. “But … we know what we can do, and it’s going to be a great story.”

That would be the most unbelievable prophecy of the season, except that a few days later a Kentucky fan made news when he got a “2014 National Champions” tattoo. Sunday, that guy borrowed his friend’s Toyota Camry to drive 14 hours to the Dallas area for today’s championship game.

There’s also Julius Randle. He’s from Dallas, and he was in eighth grade when the NCAA announced the Final Four would be here in 2014. When Randle found out, 2008 Julius called his mom at work and told her he planned to play here in 2014.

So maybe that was the craziest prediction.

Regardless, nothing’s crazier than how this stuff has come true. The reality of this Kentucky season is so much better than what it was supposed to be, right down to the heart attack–inducing Wisconsin game on Saturday.

Or the Wichita game, or Louisville, or Michigan.

If you’re rooting against Kentucky because you love UConn and the pyrotechnics of Shabazz Napier and Ryan Boatright, or because Kevin Ollie is our future president, that’s completely fair. I understand. UConn is great, and it can absolutely win tonight. Likewise, if you’re rooting against Kentucky because you’ve hated that program for decades, that’s cool, too. Even if you can’t stand Calipari, that’s fine. This is college basketball. It’s important to have enemies.

But if you’re rooting against this team, just remember that our idea of Kentucky basketball is a lot different from what this team has actually been the past four months.

Kentucky basketball is a world that includes John Calipari, World Wide Wes, Nike, Ashley Judd on the sideline, Drake in the locker room, vocal legends like Rex Chapman and Chester, sprawling web communities, and the type of fans who get national championship tattoos to prepare for the NCAA tournament. It’s a massive, well-oiled machine with all kinds of moving parts.

This team is a machine, but it’s not well-oiled. The offense breaks down for five minutes at a time, the Harrisons go from awesome to awful on every other possession, Alex Poythress is invisible one game and climbing over everyone on the court the next. Even the game winner Saturday featured a drive to nowhere on the baseline and a bobbled pass to a nervous Johnson.

Maybe none of this makes Kentucky an underdog, but it’s hard to root against a bunch of 19-year-old kids who are putting this together on the fly, proving critics a little more wrong with every win.

When Harrison hit that 3 Saturday, I stood up on press row like an idiot, speechless for a good 30 seconds. I have no idea how this keeps happening, or if any of it will keep happening Monday.

All I know for sure right now is that Aaron Harrison sold his soul to the devil on March 1, you can throw an alley-oop to the moon and Poythress will still catch it, Randle is strangely skilled and patient for a grizzly bear that plays basketball, and Calipari is either incredibly lucky or incredibly smart. Maybe both.

In every game this tournament, this team gets down by close to double digits, it looks lost on offense, and for at least one stretch it looks like the whole thing’s about to fall apart. Calipari was talking about this Saturday night.

It’s a good way to explain the whole season.

About Last Weekend: An End to the Madness