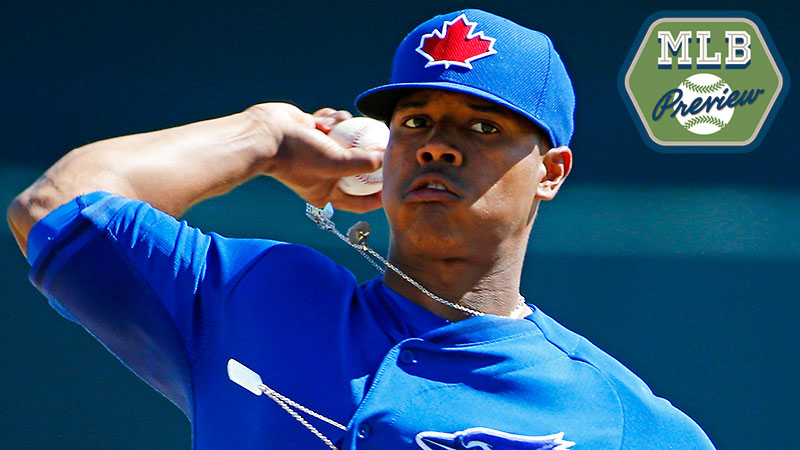 Having stumpy limbs isn’t necessarily a bad thing in baseball. Bill James has speculated that, for position players at least, shorter arms and legs aren’t automatically a disadvantage. Sometimes, in fact, long limbs are the hindrance: While a large man like Mike Trout can thrive while being fireplug-shaped, scouts wonder if 6-foot-7 Yankees prospect Aaron Judge can even hit at his size. Longer arms lead to more complicated mechanics, including a longer swing.

The opposite is true for pitchers. Keeping a big, gangly-armed pitching windup together is always a concern, but it brings the following payoff: If two pitchers’ upper bodies rotate at the same rate, the one with the longer arms will throw harder, because the ball is farther away from the axis of rotation. More than that, a tall pitcher with longer arms actually releases the ball closer to home plate than does the shorter pitcher, which gives the batter less time to react and could make a 91-mph fastball feel like 94 or 95.

That’s why prospect writers have pretty much stopped evaluating the Diamondbacks’ 6-4 right-hander Archie Bradley. Instead of describing his stuff or his mechanics, the party line on Bradley is now simply: “This is what it looks like.” It’s also why the Twins are pinning their hopes on the 6-9 Alex Meyer and why, over the next two seasons, the Pirates plan to send in reinforcements for the 6-4 Gerrit Cole in the form of the 6-6 Jameson Taillon and the 6-7 Tyler Glasnow.

Shorter pitchers have to work harder to throw harder, so they’re often overlooked or moved to the bullpen. If a pitcher is 6-foot or shorter, he has to bring Greg Maddux’s command, Pedro Martinez’s enormous hands, Roy Oswalt’s curveball, or Tim Lincecum’s flexibility to stick in the rotation for an extended period of time.

That’s not to say short guys never turn into starting pitchers, or that they never find success when they do. In the past decade, three pitchers listed at six feet or shorter (Lincecum, Johan Santana, and Bartolo Colon) have won the Cy Young a combined five times, compared with four wins by four different pitchers listed at 6-6 or taller.

The top young pitchers in the game today are Bradley, Cole, Glasnow, and the normal cast of defensive ends and stretch fours, but there’s also a group of young starters who wouldn’t stick out in the stands.

The Cleveland Indians, having lost Ubaldo Jimenez and Scott Kazmir from last year’s 92-win team, are counting on the 24-year-old, 6-foot, 190-pound Danny Salazar to fill that gap. Among starting pitchers who threw at least 50 innings last season, Salazar was second in average fastball velocity, and he plays off that 96 mph heat with an upper-80s vertical slider that looks like a changeup someone hit with a surface-to-air missile 10 feet from the plate. It’s a repertoire that led Jonah Keri to declare Salazar the Official 2013 Grantland Crush. (And if this means Jonah and Jose Fernandez aren’t seeing each other anymore, I have a phone call to make.) But there are shorter guys than Salazar who throw even harder.

And to find them, we don’t even have to leave the AL Central. Kansas City, no longer the sad-sack organization it used to be, has a bullpen full of short guys who throw hard. Yordano Ventura, a 22-year-old who’s 5-11 and 180 pounds, throws harder than any of them, and has a chance to stick in the Royals’ rotation. Keith Law put Ventura at no. 50 on his prospect list, while Baseball Prospectus’s Jason Parks is even more optimistic. Even though Ventura is built like a large eighth grader, he holds his upper-90s velocity late into games. That velocity coupled with a joke-shop curveball gives him some of the best stuff of any pitcher in the game, and it got him up to no. 12 on BP’s list, one spot ahead of 6-6 Lucas Giolito.

The knock on Ventura, whose windup and sharp curve look a little like Cliff Lee’s, but whose height and fastball velocity make him a completely different pitcher, is that a short guy with short arms doesn’t throw a fastball on a downward plane. Less downward plane means fewer ground balls and more fly balls, and among those fly balls, more home runs.

That’s the risk, anyway, and it could convince the Royals to give up on Ventura as a starter too soon if he struggles. That would be a less critical potential mistake if Luke Hochevar weren’t a Bullingtonian draft bust, and Danny Duffy weren’t so fragile that unlocking the front door to his apartment put his elbow in career-threatening peril, and Jake Odorizzi hadn’t been traded for James Shields, and Mike Montgomery hadn’t forgotten how to throw strikes and then been traded for James Shields.

The Blue Jays, like the Royals, need starting pitching, and Marcus Stroman, who was a polished Friday-night starter out of Duke two years ago, is trying to make the transition to a similar role for Toronto. Stroman has the goods: the ability to hold low-to-mid 90s velocity, multiple off-speed pitches, and excellent command of the strike zone. But he’s only 5-9, and his three-quarter arm slot prevents him from throwing downhill.

It’s uncommon, but not unheard of, to see starting pitchers who are Ventura’s or Salazar’s size. Take away the extra two or three inches to get to Stroman, however, and it makes all the difference. In the past 20 years, only one pitcher of Stroman’s height or shorter has made 20 starts in a season: Tom Gordon, who did it four times before transitioning to the bullpen. In that same span, position players 5-9 or smaller have registered 400 plate appearances in a season 268 times, and you might recognize some of the names on the list: Jimmy Rollins, Miguel Tejada, Tim Raines, Dustin Pedroia, Chuck Knoblauch, Kirby Puckett, Ivan Rodriguez, and others who run the gamut from “first-division regular” to “Hall of Famer.”

These three pitchers — as well as Dylan Bundy and, if he hasn’t undergone a complete breakdown by now, Trevor Bauer — represent an interesting set of test cases. Right now, standard procedure is to assume that anyone shorter than 6-2 or so is a reliever until and unless he proves he can start, while taller pitchers with the same repertoire get chance after chance. Andrew Cashner couldn’t stay healthy in the rotation and had trouble throwing strikes; Justin Masterson only throws two pitches and has a low arm slot that generates massive platoon splits. But both are 6-6, and both got the chance to develop into effective starters, while Ventura and Stroman will likely be consigned to the bullpen at the first sign of trouble.

This season, these pitchers — Stroman in particular — will test whether short guys can start, or if the assumption that they can’t has turned into a self-fulfilling prophecy. Maybe the inability to get downward plane on the fastball really is a crippling weakness for a starting pitcher. But I remember when guys like Drew Brees and Russell Wilson were supposed to be too short to see over the offensive line.