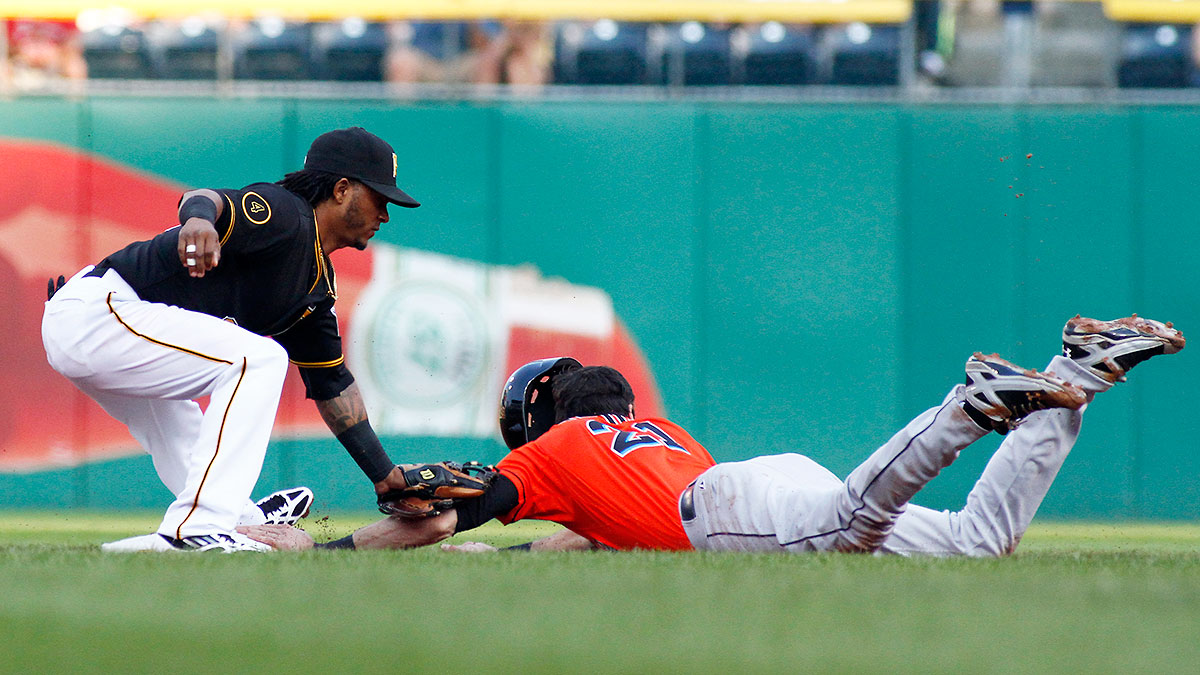 The Miami Marlins are only 4.5 games back of the National League’s second wild-card spot. That’s incredible — 4.5 games is nothing. It’s slightly more than a good weekend. It’s a hiccup, and they have 18 games in which to erase that deficit. Back in 2011, both the Cardinals and the Rays made up deficits nearly twice that big in the last month of the season. So why can’t the Marlins?

Well, it’s not impossible, but it’s incredibly unlikely. I don’t mean to single out the Marlins or their fans, either; Miami is just an example. Though as someone whose favorite team is out of the running, I’m pulling for the Marlins to make this improbable comeback because the two things I like more than baseball in general are The Mighty Giancarlo Stanton in particular and watching the world burn.

Of course, that mind-set is a nationwide problem. Just as the gentle winds of late spring bring the scent of blooming flowers, the warmth of a reborn sun, and the comfort of newfound and rekindled love, the gusts of early September make fools of intelligent, grounded Americans. Folks who have a pretty good handle on probability at all other times of the year see a single-digit number in the “Games Behind” column and take complete leave of their senses.

The good news is that we can quantify how unlikely such a comeback is. To continue with the earlier example, the Marlins have a 0.9 percent chance of making the wild-card round according to Baseball Prospectus, and a 0.1 percent chance according to ESPN. That’s a rounding error, a trivial number. And again, that’s just Miami. If I were a fan of the Indians, Yankees, or Blue Jays, I wouldn’t turn to those projections for comfort, either.

But I’ll be honest — it feels like a team that’s 4.5 games out of a playoff spot with three weeks to go would have a better chance than that. It feels that way, but as is so often the case, the truth is much less optimistic due to four factors that we overrate.

The first thing we overrate is the difference between a good team and a bad team. If you follow other sports — football, soccer, basketball — good teams routinely beat bad teams. This isn’t the case in baseball. The overwhelming majority of baseball teams win between 40 and 60 percent of their games. This year, only one team (Anaheim) has won more than 60 percent of its games, and only one team (Texas) has lost more than 60 percent of its games. Look at the NL East: The Nationals look fairly bulletproof to me at this stage of the season. I’d pick them to win the pennant. On the other end, the Phillies flat-out suck. But the Nationals’ winning percentage is .569, while the Phillies’ is .462. Over 18 games, the difference between a powerhouse and a doormat is two games, more or less. I wouldn’t predict that the Marlins would win five more games than the Pirates, who currently occupy the NL’s second wild-card spot, over the next 18 games, because no team is five games better than the Pirates over that short a span.

That said, we all know how unpredictable baseball can be — of course the Marlins could win a handful more games than Pittsburgh over three weeks. The second problem, though, is that optimistic fans of trailing teams often forget that we’ve got enough data in our rearview mirror now to have a pretty good idea of how teams behave, and there’s no compelling reason (from winning percentage to run differential to a position-by-position breakdown) to believe that Miami is better than any team it’s chasing. By this point, if you’re dreaming of making up 4.5 games, you’re relying on luck alone, and if that’s the case, you also open the door to the possibility that Miami, not Pittsburgh, will collapse down the stretch.

Of course, even if the Marlins do get lucky, the Pirates aren’t the only team they’ll have to chase down, which is the third thing we tend to forget. Just as important as the number of games a team has to make up is the number of teams it has to leapfrog. If the Marlins only had to catch the Pirates, I might take a flier on their chances, because any team can get hot and any team can go in the tank. But that’s not all: The Marlins also have to beat out the Braves and Brewers and stay ahead of the Mets, who are as close in the standings to Miami as the Marlins are to any team in front of them.

All of those minor improbabilities compound each other until they create one large improbability, which becomes a practical impossibility. So why do we still believe?

Part of it stems from humanity’s annoying insistence on being optimistic, which is the result of years of evolution and watching heist movies where everything has to go right and does. If baseball were a heist movie, Danny Ocean would’ve gotten busted for breaking parole and gone back to jail before you even met half of the members of his eponymous 11.

But the fourth thing we overrate is the probability of the stars aligning, because they’ve done so often, particularly in recent memory. Go to Coolstandings.com — the source for ESPN’s playoff odds — and you’ll find a list of the top playoff collapses in MLB history. In the top five, you’ll find the 1995 Angels, the 1951 Dodgers — who lost to a Giants team that had Willie Mays and only one team to beat, and cheated down the stretch like they were trying to win the Tour de France in the 1990s — and three teams from the past eight years. We insist on entertaining the near-impossible because we’ve seen exactly that happen a lot recently, including in 2011, when the near-impossible occurred twice in the span of minutes on possibly the greatest night in the history of regular-season baseball.

That’s awesome, but it doesn’t mean the near-impossible will happen again. When the odds look like this, perhaps it’s best to keep your optimism to yourself.