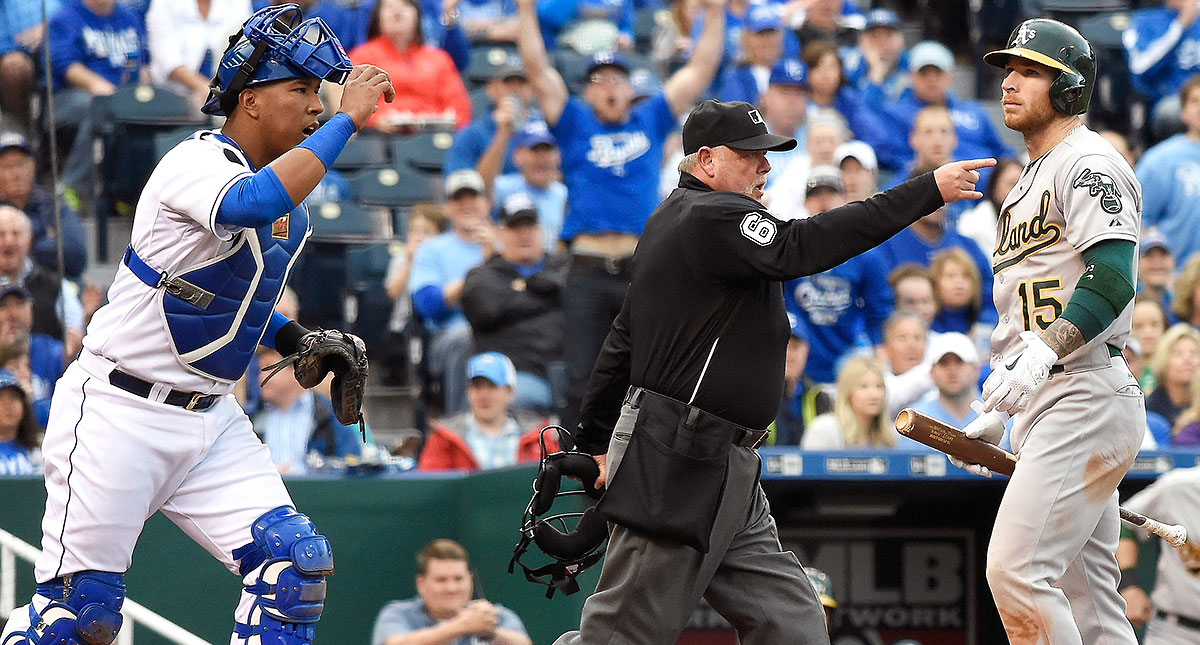 Sports are supposed to be unscripted entertainment — a reality show. And like all reality TV, sports are at their most entertaining when emotions run high and there’s a tangible sense of tension.

It’s for that reason that this weekend’s Brett Lawrie Affair between Oakland and Kansas City has the potential to turn a routine interdivisional American League matchup into a continually crackling inferno of emotion.

If you missed it, here are the key plot points: On Friday, Lawrie slid hard into Royals shortstop Alcides Escobar in an attempt to break up a double play. It was the kind of play you see more or less every day, and unless it leads to a key player suffering an injury, like Escobar’s sprained knee, it either passes unnoticed or leads only to a few heated words. It was a late, careless slide — a clear yellow card — but I take Lawrie at his word when he says it wasn’t malicious. But because this is baseball, Lawrie’s word wasn’t good enough for Kansas City, whose pitchers spent most of the rest of the weekend throwing at him.

On Saturday, Yordano Ventura gave Lawrie 99 on the elbow and was ejected. After the benches cleared, everything was supposed to go back to normal. But on Sunday, after Scott Kazmir hit Lorenzo Cain in the foot in the first inning — Kazmir claims this was accidental, if particularly poorly timed — tempers flared up again. When Kazmir was allowed to stay in the game, Royals manager Ned Yost and pitching coach Dave Eiland were sent screaming to the clubhouse. Then, in the eighth inning, Kansas City reliever Kelvin Herrera threw behind Lawrie’s shoulders, climbing the ladder and the speedometer to get dangerously close to Lawrie’s face. The benches cleared again, and Herrera, Escobar, and bench coach Don Wakamatsu were all ejected. And, as if to leave no doubt about the message he was sending, Herrera pointed to his head and shouted at Lawrie while leaving the field of play. In the 48 hours after the slide, the benches cleared twice and six Royals were ejected.

While the events of this past weekend are exciting and juice up the emotional stakes of a burgeoning rivalry to unexpected levels, you don’t need that great of an imagination to understand that while the occasional influx of intentional violence does break up the normal routine, it can also be incredibly dangerous.

Throwing at batters is dumb. This shouldn’t be controversial. First of all, doing so puts a runner on base. Second, pitchers who throw at batters often get ejected, as Ventura did on Saturday and Herrera did on Sunday. And while I’m sure Ned Yost likes that his players are standing up for each other, I’m also sure he’d like to keep his best pitchers on the mound. But most important, throwing at a batter is dangerous: If a pitcher hits a batter in the back, the batter goes to first base with a bruise, but if the pitcher misses by even a foot — and, having seen C.J. Wilson pitch, I can assure you that this happens from time to time — and hits the batter in the hand or, God forbid, the head, someone else goes to first while the batter goes to the hospital.

Alternative expressions of violence aren’t much better. Baseball isn’t like hockey, which is to say that baseball is played and consumed by civilized human beings and therefore doesn’t tacitly sanction occasional breaks for tea and punch-fighting.

Baseball’s equivalent of a line brawl is everyone from both teams running out in front of home plate and staring at each other for a minute or two, and that’s for the best. Someone else can break up a fight between Lawrie, who’s an anthropomorphic bicep, and Royals catcher Sal Perez, who’s built like a bunch of nuclear-powered Soviet icebreakers sitting on each other’s shoulders, wearing a trench coat, pretending to be an oil tanker.

But what happens when the norms of the baseball fight are broken? When purpose pitches and on-field staring contests give way to two large groups of men actually trying to hurt each other? You can go back to the Giants’ Juan Marichal hitting Dodgers catcher John Roseboro in the head with a bat in 1965. Or, if your time machine doesn’t go back that far, consider the 2010 fight in which Johnny Cueto kicked Jason LaRue in the head and ended LaRue’s career.

I don’t understand how these grown-ups so often fail to restrain themselves from resorting to physical violence when their feelings are hurt. (Then again, instances of physical violence tend not to go as well for writers as they do for athletes, so that might be my problem.)

But I do understand why that inclination toward violence exists, because for all my ostentatious, condescending lefty pacifism, I’m not stupid or inhuman. I’m a Flyers fan, and that means that sometimes I just want to watch someone beat the fuck out of Sidney Crosby, because he did a shitty thing, or said a shitty thing, or just because he’s got that kind of face. To feel those feelings is natural. To act on them is criminal. But to watch someone else act on them is thrilling, and that’s the source of a shameful hypocrisy that causes us to crave more of what happened in Kansas City on Saturday and Sunday. The emotional high of actual sports hatred is so alluring that, while nobody with a conscience is rooting for a player to get seriously injured, we’re willing to put up with that risk if it means feeling that rush. Go back and look at how the crowd reacted when Ventura hit Lawrie — that’s bloodlust, and that’s exactly how it would’ve gone down in 29 other major league ballparks.

It’s also why I can’t get enough of everything about this budding feud. There’s the history of the two teams — not just last year’s wild-card game, but also the way the A’s used the Royals as a farm club in the Moneyball years, and the way the A’s used Kansas City as a pit stop on their road trip from being good in Philadelphia to being good in Oakland. There’s the rambling apology text message Lawrie sent to a number Eric Hosmer told him was Escobar’s, a message Escobar claims not to have received. Then there’s the tension, the anger, the extra buzz of electricity that comes from two teams having reason to genuinely dislike each other; it’s like biting into a roast beef sandwich that you didn’t know had horseradish on it.

I wish there were a way to replicate that feeling, the slightly higher stakes that the threat of violence lend to a sporting event, without actually putting players’ livelihoods in danger. Because the threat of violence in sports is as addictive as it is euphoric, and I’m willing to compromise certain values, and condone certain distasteful or dangerous behaviors, to feel it again.

But that’s why God gave us two hands: so that we can use one to wag a finger in disapproval of physical violence while using the other to call up the next Royals-A’s game on MLB.TV. Because you’re fooling yourself if you think I’m going to miss what happens next.