Amid the Rash of Early MLB Injuries, How Screwed Is Your Team? 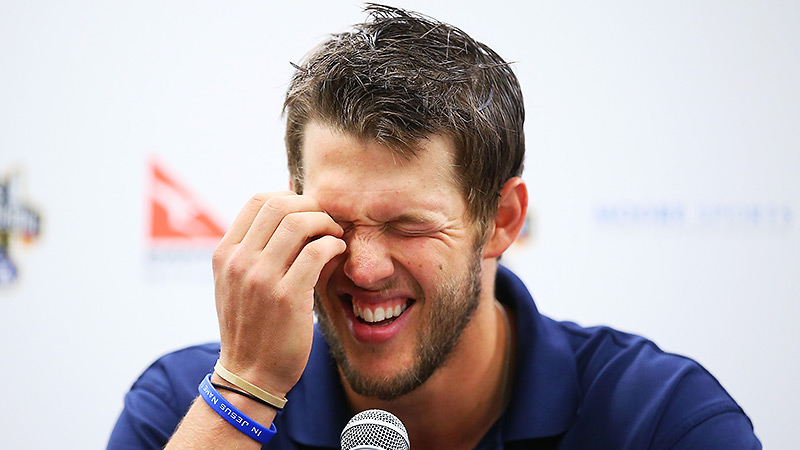 We’re mere days into the 2014 baseball season, yet nearly every team with designs on a title is missing a key player. It’s like Week 15 of the NFL season had a baby with a slasher movie where the pretty high school kids die one by one.

Of course, the injuries vary in type, severity, and impact. So if this monster is chasing your team, how nervous should you be, on a scale of “closed the book you’re reading without marking your page” to “woke up in a torture dungeon”? Let’s find out:

In addition to irritating millions of baseball fans who think his shtick stopped being funny in 2010, Wilson has also aggravated a nerve in his elbow. That’s a minor inconvenience, because the Dodgers have about 30 other good relief pitchers they can use in the eighth inning. The big worry is Kershaw.

It’s never a good thing when the best pitcher in the world misses any time, but right now, it looks like Kershaw’s balky back will be re-evaluated in a couple of weeks, with an eye toward an early May return. While that’s more time than Kershaw was initially expected to miss, it’s still nothing if that’s all it winds up being. Without Kershaw, the Dodgers’ rotation will be Zack Greinke, Hyun-Jin Ryu, Dan Haren, Paul Maholm, and soon Josh Beckett, who’s making a rehab start Friday. While that’s a little more top-heavy than a team would like, Maholm, who will likely get pushed out of the rotation once Beckett and Kershaw both return, has to be one of the better no. 6 starters in the game. Starting Maholm instead of Kershaw for a month means the Dodgers will probably lose one or two more games than they otherwise would have, but considering how heavily they’re favored to win the division, it’s smarter to be careful and patient with Kershaw than to rush him back and risk losing him in months that matter more.

How nervous should you be? You’re doing 86 in a 70 mph zone, and you see a state trooper parked in the median. You don’t know if he’s going to pull out, but you know that even if he does, everyone else is speeding, too. 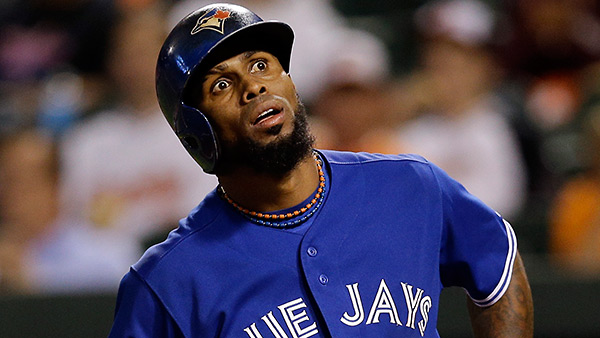 Reyes tweaked his hamstring on Opening Day and promptly went on the 15-day DL, which is bad, because he’s Toronto’s best player. The Blue Jays are going to need him if they hope to contend … but seriously, guys, who was counting on Toronto to win the division? Reyes being out is quite literally just adding injury to insult.

How nervous should you be? You’ve already lived the first two verses of Alanis Morissette’s “Ironic” today. What better way to end it than by being buried under 10,000 spoons?

The bad news: I just listed the Reds’ best starting pitcher, their starting catcher, and probably their three best relief pitchers. What’s more, Marshall has now missed significant time with shoulder injuries, which are the worst a pitcher can suffer. Wait, that can’t be right, because Chapman got hit in the head with a line drive and had to have his face peeled off so doctors could repair his fractured skull. Yeah, that sounds worse.

The good news: Latos, Broxton, and Mesoraco should be back in a couple of weeks. Still, by sheer volume, the injuries have created less than ideal circumstances for a team that already would have needed a lot of things to go right in order to win the division.

How nervous should you be? On Monday afternoon I saw Logan Ondrusek pitching. It wasn’t a save situation, but it was the ninth inning of a one-run game. I have no emotional investment in the Reds one way or another, but that still made me nervous, because Ondrusek is terrible. Reds fans should imagine Ondrusek pitching in high-leverage situations, and then get that nervous.

Victorino has a mild hamstring injury that will be reevaluated in a week or so. Whatever. Grady Sizemore being healthy for the first time in five years gives Boston flexibility. Daniel Nava can play right field, and so can Jackie Bradley Jr. Barring an injury to Sizemore before Victorino returns, which certainly isn’t out of the realm of possibility, the Red Sox will be fine.

How nervous should you be? Nah, bro. You’re good. 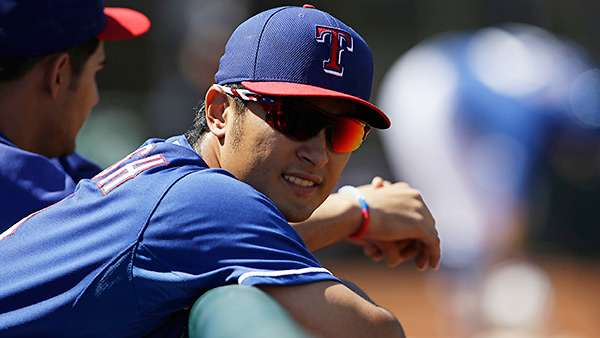 I turned in my season predictions before Darvish and Profar got hurt, and I said the Rangers would win the pennant. Then Tanner Effing Scheppers became the Opening Day starter. Darvish is the biggest loss, but also the briefest: He’s set to come off the DL this week and start Sunday against the Rays. That’s about the only good news. You can talk yourself into this team by saying that once Darvish, Harrison, and Holland return, they’ll join Martin Perez to form a pretty good playoff rotation. However, that assumes the gremlins that have plagued the Rangers this offseason — Harrison aggravated his back while sleeping and Holland hurt himself by tripping over his dog — will leave them alone come July.

How nervous should you be? If you expected to see the Rangers in the World Series, you should feel like you’re home alone and walking around in the dark after midnight after just watching The Exorcist for the first time.

Add in Ervin Santana, who isn’t hurt but who hasn’t gotten into form following a delayed spring training, and that list looks like a strong starting rotation of guys who aren’t currently starting. The real shame is Medlen and Beachy, who finessed their way into the hearts of Braves fans. We’re at the point medically where recovering from Tommy John surgery is almost automatic the first time, but doing so the second time is no sure thing.

How nervous should you be? You’re meeting your girlfriend’s/boyfriend’s parents for the first time. 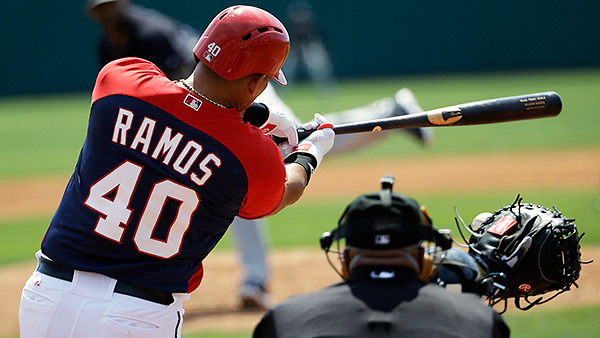 Here’s the thing about the broken hamate bone. It’ll heal enough for Ramos to play in two months, but he won’t have all the strength back in his hand for almost a year, which means he won’t be able to grip the bat as well, which means he won’t hit for much power. Of course, when he comes back and doesn’t hit for power, everyone will either not know or not care that it takes a full year to recover completely from a broken hamate bone. There is no rest for the weary, and there is even less for Wilson Ramos.

Also, Bryce Harper didn’t brain himself on Eric Young Jr.’s leg after all, and the Braves are still way worse off than the Nats.

How nervous should you be? You panic because you can’t feel your cell phone in your pocket. You tell the person you’re talking to on the phone that you can’t find your phone.

The real heartbreaker here is Parker, Oakland’s nominal ace and a longtime personal favorite of mine, who, like Medlen and Beachy, needs Tommy John surgery again. Remember, returning from a second Tommy John surgery is far from a given, even for someone as young as Parker. The rest is a mixed bag: Griffin wasn’t anything special last year, but he threw 200 league-average-ish innings, and that’s a tough thing to lose until at least May. Oakland signed O’Flaherty during his recovery from Tommy John surgery, so it wasn’t counting on him anyway, and Cook and Gentry look set to return in a matter of days.

I was definitely worried about Oakland’s starting rotation minus Parker and Griffin, but Sonny Gray and Scott Kazmir were both outstanding in their starts this week, and even Josh Lindblom made it out of a spot start without hurting anyone. If Jim Johnson weren’t stockpiling blown saves, Oakland would be 3-0 right now. Given that defense, that ballpark, and that front office’s eye for talent, the A’s might be able to win 90 games with a cast of youngsters, reclamation projects, and store-brand strike-throwers. I’m still not sold on this rotation, but I’m going to wait until one of the top five starters gives up a run to write about it.

How nervous should you be? Wow. If I was going to have that third cup of coffee, I really should have gone to the bathroom before I got on the subway. How many stops left? Four? I think I can hold it.

I respect you, Michiganders, so I’ll tell it to you plain: Alex Gonzalez is a terrible shortstop. He was a terrible shortstop when he was 26, and he’s going to be even worse now that he’s 37. You know how Derek Jeter and Jimmy Rollins are terrible now? Those guys were awesome when they were in their late 20s and they’re terrible now, because shortstops age like milk, not wine. Still, Rollins and Jeter are better now than Gonzalez was 10 years ago. The Tigers might as well put a carton of milk that was produced in 1977 at shortstop and see how it goes. It’s a shame, because while Iglesias isn’t much better with the bat than Gonzalez, he’s a stupendous defender, and I’m sad I won’t get to see him play this year.

Even so, neither the Royals nor the Indians are bulletproof, and if Gonzalez is this bad come June, Detroit can still sign Stephen Drew the day after the draft, when doing so won’t cost it a pick. I think the Tigers can win the AL Central with one hole in the lineup, because Miguel Cabrera and the starting pitchers are that good. And unless someone else gets Drew first or another Tiger gets hurt, Detroit has time.

How nervous should you be?