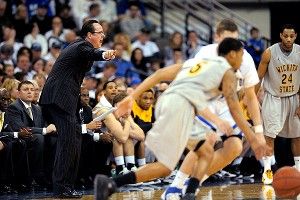 With an emphatic 21-point win over indie darling Creighton on Saturday, Wichita State poked a tentative head out from the underground tunnel of mid-major anonymity. The Shockers made their first appearance in the AP Top 25 poll this week, tied for 24th, and are looking more and more like a lock for the big dance. But what do we really know about them? Let’s tackle this Q&A style.

Q: Where is Wichita State?
A: In Wichita, Kansas. “Wichita” is a Native American word that means “Witch’s Toe.” (I made that up.)

The school was established in 1895, and the official motto is: “Thinkers, Doers, Movers and Shockers.”

Q: Are you going to make a joke about the nickname?
A: I’ll leave that to every college student in America in about one month. Sound fair? In fact, I’ve vowed to make it through this whole post without slipping once.

Q: For real, though, what’s the deal with “Shockers”?
A: This is the part of the blog post where I try to get really clever with my phrasing to avoid accusations that I’m simply plagiarizing from Wikipedia. It turns out that “shock” is a verb meaning “to gather into shocks,” and it’s also a noun meaning “a number of sheaves of grain stacked upright in a field for drying.”

It seems that many student-athletes at Wichita State would shock wheat back in the day. Everyone knows you can’t take three steps in Kansas without running into a stalk of wheat, so this service was essential. Roundabout 1904, a manager of the football team thought long and hard before settling on the nickname “Wheat Shockers.” It caught on and was shortened and adopted later. In 1948, a former Marine named Wilbur Elsea designed a bad-ass mascot that was named “WuShock,” and in 1998 the school made it even more bad ass.

Here’s what it looks like now: WUSHOCK. Sorry for the nightmares. Here’s a photo timeline of WuShock over the last 60-plus years.

Q: Coach?
A. The Shockers are coached by Gregg Marshall, 48, who previously coached at Winthrop. He led the Eagles to seven NCAA tournament appearances in nine seasons and finally won a tournament game, against Notre Dame, in 2007, his final season. He then took the Wichita job (dead set on coaching every mid-major team that begins with “Wi,” I imagine — look out, Wisconsin Green-Bay), inheriting a 17-14 team from current Maryland coach Mark Turgeon.

After two middling years, he led the 25-10 Shockers to a first-round NIT loss in 2009, and last year they won the whole NIT kit and caboodle, beating Nebraska, Virginia Tech, College of Charleston, Washington State, and finally Alabama to take the title.

At 22-4, this will likely be the team’s best year yet, and it hopes to return to the glory days of the 2006 Sweet 16 season under Turgeon.

Q: Players?
A: Garrett Stutz, a 7-foot, 255-pound senior, leads the team with 14.1 points and 7.9 rebounds per game. He’s one of the top 20 defensive rebounders in the country, and he’s joined by senior guards Joe Ragland (13.2 points per game, 47.3 percent from 3) and Toure’ Murry (12.3 points, 4.9 boards). Ben Smith and David Kyles, both seniors, provide perimeter height and good 3-point shooting. You may be noticing a theme here. In fact, of Wichita’s seven leading scorers, five are seniors and two are juniors, a fact that bodes really well for their tournament hopes.

Q: What brand of basketball do the lads play?
A: This is a medium-tempo team with a very good defense (24th in the country, by Kenpom’s efficiency ratings), and a spectacular offense (ninth, by the same measure). They score particularly well inside the arc, and while they’re not going to snatch too many offensive boards per game, they do a terrific job keeping others off the offensive glass. They play smart, avoiding turnovers like you’d expect from a team full of upperclassmen, and with a few tall guards, they defend the 3 at an impressive rate.

Q: Quality wins? Bad losses?
A: Earlier in the season, the Shockers beat UNLV, now the no. 11 team in the nation, by 19 points at home. That’s their best win, and really the only out-of-conference showing that raises an eyebrow. Two of their early losses came in neutral-court November games, to Temple (overtime) and Alabama, the team they beat months earlier for the NIT title. A home loss to Creighton, later avenged, is one of just two league losses, the other coming to Drake in triple overtime on the road.

The Shockers are on a four-game winning streak, and tonight’s matchup against a sneaky-good Missouri State team is probably the most compelling game on the remaining schedule.

Q: What’s the tourney outlook?
A. The seeding depends entirely on Wichita State. If they win out, which seems likely, and then beat Creighton en route to winning the Missouri Valley Conference title, it’s reasonable to project them as a 5-seed, or a 4 at a stretch.

Once they’re in, the outlook is nice. This is the fourth-most experienced team in Division I, per Kenpom again, and if Stutz stays out of foul trouble, the Shockers have decent height. Three of the team’s prominent guards are at least 6-foot-4, and 6-foot-8 Carl Hall comes off the bench to add rebounding and post presence.

What is it you want from a so-called Cinderella, a mid-major who can make a deep run and maybe even threaten the Final Four, as George Mason managed in 2006? You want upperclassmen, lots of seniors and juniors. You want experience, such as a championship NIT run a year earlier. You want height and strength. You want a couple shooters. You want excellence on both ends of the floor. And you want a team that finished hot.

If those are your criteria, the Shockers are a perfect fit. Pencil them in for the Sweet 16.