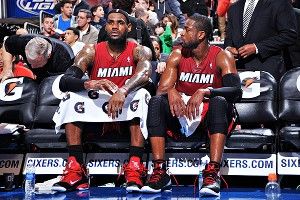 On Friday night, the New York Knicks outdueled Kobe Bryant and the Los Angeles Lakers at Madison Square Garden. Jeremy Lin, who recorded a career-high 38 points, was the story of the game. But his performance wasn’t the only reason the matchup was notable. It also helped illustrate a lesser-known trend of this lockout-shortened season — teams are playing worse than ever on the road.

Much has been written about the compressed schedule and its effect on play this season. With more than a third of the season now in the books, we have the first sufficient sample size to analyze the effects of the compressed schedule. Clearly, quality of play has gone down across the board, but the increased amount of back-to-backs has produced very different outcomes than last season. It appears home-court advantage is much more important this year.

Los Angeles had won in overtime in Boston on Thursday, and was on the second night of a road back-to-back on Friday. The Lakers scored only 91.2 points per 100 possessions on Friday, well below their season average. This poor road performance is just one example of the larger trend of teams playing worse on the road with less rest in 2012.

(Before going much further, I must offer the caveat that this is still a fairly small sample size, and that these results may change as the season continues.)

Both points per game and points per 100 possessions (my preferred, tempo-free metric) are down about 5 percent this year from last year. This mirrors a similar decline in efficiency in the 1999 lockout season. What is more interesting, though, is how the schedule itself has magnified the effects of being at home vs. being on the road. Let’s look at performance at home and on the road in the second night of back-to-backs in the past two years. The numbers here are points scored and allowed per 100 possessions:

The bottom two rows adjust for the quality of the opponent. I divided individual game performance by the opponent’s average performance over the season. As you can see, home teams in back-to-backs are playing better than they did in 2010-11, and that is mainly caused by playing better defense (allowing 98 points per 100 possessions instead of 104). And when the offensive performance is adjusted for the lower efficiency this year, home teams are playing as well on offense as they did in 2010-11.

The difference for road teams is even more stark:

Road teams are faring far worse on back-to-backs so far this year. This difference reflects worse relative performance on both offense and defense, but the offensive decline is greater. In fact, teams are shooting 4.5 percentage points worse on road back-to-backs this year than they were last season.

It is also important to consider the opponent’s rest when examining the effects of the compressed schedule. The really interesting thing is that the bad performance of road teams in back-to-backs is just as large when their opponent is also playing a back-to-back: 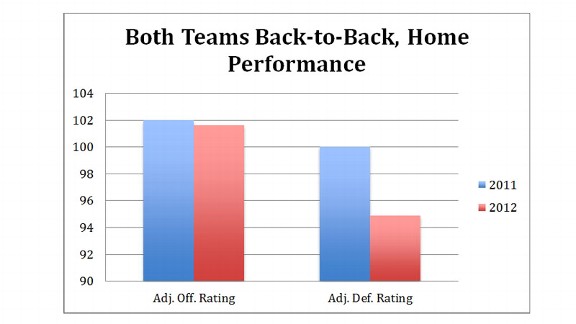 As the chart above shows, when both teams are playing back-to-backs, the road team’s offense is far worse this season as compared to last season. It appears that the major effect of the compressed schedule is to make road teams play worse offensively, especially when they have less rest.

So far this year, teams are playing more back-to-backs and performing about three points per 100 possessions worse on the road and roughly two points per 100 possessions better at home, on an adjusted basis. The home jump seems to be related to the fact that teams are much more likely to play a team on the second night of a road back-to-back this year than last year. The road depression can probably be attributed to less rest during this compressed schedule. At least so far, this analysis shows that the schedule is having a large effect on performance. A difference of between two and six points per possession is huge in the NBA — as the Lakers found out in New York on Friday night.

John Ezekowitz is a junior at Harvard and co-president of the Harvard Sports Analysis Collective.

Hand Down, Man Down, Lin Down