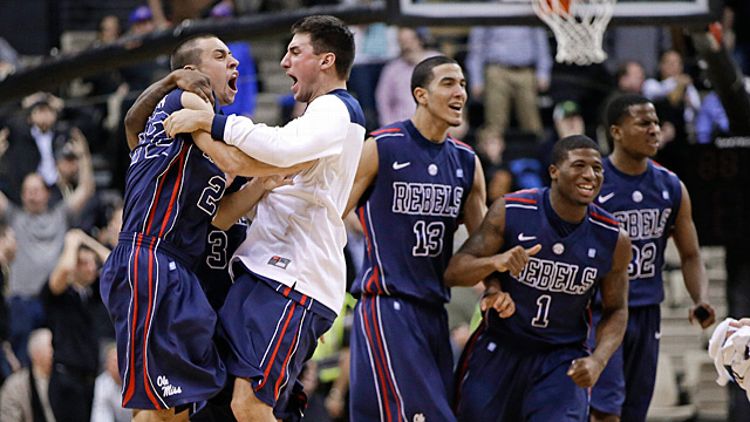 If you were lulled into a stupor watching Bo Ryan run slow, agonizing circles around Tom Crean as the eleven o’clock hour approached last night, you might have missed the hidden gem on ESPNU. And that’s too bad, but I’m here to help. Because while Indiana was losing its first home game, an Ole Miss Rebel named Marshall Henderson was putting on the greatest sideshow of the season, and his whole nutty carnival act climaxed with a buzzer-beater that tranquilized the entire Vanderbilt student body. Compared to BadgerBall, it felt like mainlining raw caffeine to the brain.

First, about Henderson: He’s a junior shooting guard, but this is his first year with Ole Miss. He started out with Utah as a freshman, averaging 11 points per game, and then transferred to Texas Tech to play for Pat Knight. Unfortunately for him, Texas Tech fired Knight after Henderson sat out his sophomore season, and Knight was replaced by the sadistic psychopath Billy Gillispie. In the meantime, Henderson managed to get arrested on a felony drug charge, eventually had the charges dropped, and smartly joined the exodus out of Lubbock. He spent a season slumming in the junior colleges, where he won Player of the Year while leading South Plains to an undefeated record and a national title. That brought him to the attention of Andy Kennedy, who was looking for a shooter at Ole Miss and thought the JuCo Player of the Year might work just fine. As of today, Henderson has given him what he wanted, with top 10 numbers in 3-pointers attempted and made.

From Utah to Texas to Mississippi — across the whole American South, basically — the consensus seems to be that he’s constantly juiced up on borderline unhealthy doses of Will to Win, and can cross over into unrepentant punk territory without much warning. Whatever the diagnosis — passionate competitor or abrasive chest-beater — his performance on Tuesday night was enthralling; I’d describe it in detail, but the video below says it best. It’s a little on the long side, because I meticulously documented every noteworthy Marshall moment from inside eight minutes (including the times when the announcers soliloquized on his merits and demerits), but believe me, it’s time well spent.

One last thing: Along with everything else, watch the man’s eyes.

It was a spectacular show from Henderson, who shouted and baited and taunted and hustled and bristled and gunned his way to an electrifying end. The comeback win was the sixth straight for Ole Miss, who came off a signature weekend victory over Missouri and are starting to look — at least by SEC standards — like a top-tier club.

But the main attraction is the man in the video. My contention is that we need a little more insanity and unpredictability in college basketball, and Henderson doesn’t seem like the type to disappoint. Hell, watch the tail end of the video; he even infected his coach. If you think I’m missing Ole Miss the next time they’re on TV, then you’re crazier than …

But no. You’re probably not that crazy.