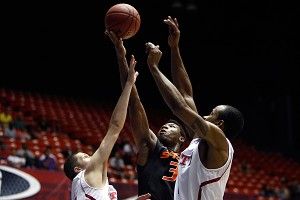 The most interesting part of the Puerto Rico Tipoff championship game, which ended with a 76-56 Oklahoma State upset over no. 6 NC State, was always going to be the point guard duel: Wolfpack junior Lorenzo Brown vs. Cowboy freshman Marcus Smart. Brown emerged as one of the most exciting point guards at the end of last season, and was a first-team All-ACC preseason pick. Smart has earned some recognition as one of the top freshmen in his class, but has routinely been overshadowed by players at high-profile programs like Nerlens Noel and Shabazz Muhammad. But after Sunday’s game, when Smart spent 40 minutes embarrassing one of the best point guards in the country on his way to earning a tournament MVP, that should no longer be a problem.

I want to talk about exactly how Smart managed to dominate and take a sizable chunk out of Brown’s reputation, and the best way to start is with his remarkable stat line:

The picture those numbers paint is accurate. He can shoot, he can drive, he’s a passer with great vision, and at a solid 6-foot-4, he’s such a strong rebounding guard that Oklahoma State occasionally puts him on the low block for foul shots. On defense, he has quick hands and excellent instincts, and both his leaping/hanging ability and keen sense of timing make him a good shot blocker. I’ve watched him for three straight games now, and I’ve yet to find anything he can’t do. But words are words, and you’ve got to see it to understand Smart’s limitless potential. For your viewing pleasure, here’s a highlight video with every block, steal, board, assist, and point from Sunday’s win:

To understand Smart a little better, let’s make a list of things you can’t do when he’s on the floor:

1. Leave him open beyond the arc
2. Help when he drives — he’ll find the open man for 3
3. Make lazy passes in his direction
4. Lose focus for even a second when he’s guarding the ball
5. Guard him inside with anyone short and weak like State’s Tyler Lewis
6. Stop him on the fast break
7. Go up weak for a layup or jumper
8. Lose him after a shot when an offensive rebound’s in play

The rebounds in the video above don’t quite show how well he can crash the glass, but in the first two games of the tournament, Smart would often tear down a rebound over two or three bigger men. He’s a physical, dominating presence everywhere on the floor, and, according to Oklahoma State coach Travis Ford, Florida’s Billy Donovan, and Gonzaga’s Mark Few (the last two of whom coached Smart in the FIBA U18 championships last summer), he’s an intense competitor. ESPN analyst Dave Telep was already singing his praises more than a year ago. And for what it’s worth, I stand by my “Most Exciting Freshman” designation from the preseason, while acknowledging that I have an unshakable point guard bias. Everywhere you turn, the word is the same — he’s bright, he’s tough, and he has an inner drive you only find once every few years.

It showed on Sunday. As Dan Dakich pointed out, he played like he wanted to embarrass Brown, like he had something to prove. But unlike Smart, Brown seemed to wilt from the competition, showing a strange lack of energy and shrinking from the moment. He was joined in the game-long letdown by preseason ACC Player of the Year C.J. Leslie, who spent the entire first half pleading with and yelling at the referees, missing short layups, and sulking. At the start of the second half, he committed his fourth foul, swore at the ref, and was issued a quick technical that ended his night. Richard Howell and Scott Wood had quiet games to complete the upperclassman futility for the Wolfpack, and if it weren’t for the stellar play of freshmen T.J. Warren and Rodney Purvis, the final score could have been even worse. It was a painful loss for State, whose defensive weakness was exposed brutally and completely.

Oklahoma State, on the other hand, looked better and better with each game. Le’Bryan Nash, an athletic 6-foot-7 swingman with a penchant for violent dunks, is a perfect complement to Smart, and his ability to get to the line is matched by his great touch once there; he was 13-for-13 against State. Phil Forte is a great shooter and another huge beneficiary of Smart’s play, as you saw in the video, and Markel Brown and Philip Jurick might be better than anyone thought in the frontcourt. But the MVP, and the one who will deservedly get the national accolades, is Smart. It would be easy to go overboard and compare him to some of the great college point guards of the past two decades, and as you could probably tell, I’m tempted. For now, let’s leave it at this — UCLA freshman Shabazz Muhammad is expected to play his first game Monday night, and Marcus Smart just set the bar, very, very high.

Don't Look Now, the Spurs Are Changing Their Game