Don’t Look Now, the Spurs Are Changing Their Game 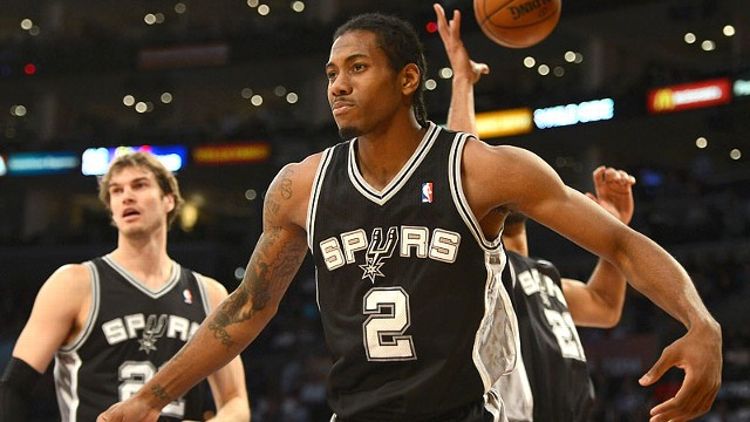 Here’s a sobering thought: The Spurs are 8-2, with the fifth-best point differential in the league, and they are basically screwing around.

OK, that’s an exaggeration. Gregg Popovich rarely screws around, even though it’s delightful when he does. But the Spurs are clearly experimenting, with an eye on reinventing themselves on both ends of the floor by the time the playoffs come around. It seems strange to redesign a team that went 31-2 in the 33 games before the Thunder rallied for four straight wins in the conference finals, but the redesign is happening, and it’s Popovich’s way of recognizing that the team got as far as it could with its pick-and-roll-all-the-time offense and just-above-average defense. The Spurs ran into a more athletic team that did enough defensively to at least limit San Antonio’s pick-and-roll devastation, and they found they didn’t have enough on either end to compensate. The Thunder are still there, the Lakers are a powerhouse-in-waiting, and the Heat should be monstrous in the spring.

And so Popovich has his team evolving and throwing some stuff at the wall early. This is obvious even on the surface. Matt Bonner is out of the rotation even though San Antonio’s offense basically broke NBA records whenever he was on the floor last season. DeJuan Blair is back in, and Patty Mills appears to have cracked it in a real way, too. Popovich has tweaked his starting lineup several times, both between games and during them, with a new starter sometimes stepping on the court for the second half. The Spurs are the only team in the league that has played only one five-man group longer than 21 minutes this season, per NBA.com. Minor nicks have something to do with that, as Manu Ginobili and Gary Neal have missed two games apiece, and Tony Parker has missed one. But other teams have dealt with more serious injury issues, and they have all had more lineup consistency than San Antonio.

Popovich is searching for diversity on offense and integrity on defense. He’s been more successful on the scoring front so far, even if the Spurs’ offense isn’t lapping the league as it did last season; San Antonio is still sixth in points per possession, fresh off its destruction of Denver over the weekend, and this will clearly remain a top-shelf offensive team. But they’re 12th in points allowed per possession, right about where they finished last season, when they just weren’t solid enough on that end to beat four good teams in a row in May and June. They’ve allowed a whopping six more points per 100 possessions when Tim Duncan sits, continuing a trend that killed them last season, only their defensive rebounding has fallen off a cliff in those non-Duncan minutes this season after holding steady a year ago. Popovich still hasn’t solved the “second big” issue, even as he plays around with more big-big pairings on a night-to-night basis. A trade remains possible; San Antonio is overloaded with decent frontcourt players and young combo guards, and there is speculation around the league that the Spurs are suddenly playing Blair more in order to showcase him. But everyone is always suspicious of San Antonio, waiting in fear of the next R.C. Buford heist.

The most striking way in which the Spurs have shown evolution early: They are assisting on a much higher percentage of their baskets this season. The Spurs’ gorgeous scoring machine was not especially assist-heavy last season; San Antonio in 2011-12 assisted on just 58.5 percent of its baskets, 13th in the league, and they ranked even lower in assist rate on 2-point baskets, per NBA.com. And they needed Boris Diaw’s smart passing to prop them up to that level; they assisted on 63.6 percent of baskets when Diaw played and just 55.8 percent when he sat.

This season? The Spurs have assisted on 65.9 percent of their baskets, third in the league — a huge jump. Nearly every core player on the team, especially the old guys, are getting more of their hoops via assists this season, according to Hoopdata. And their assist rate has held at a robust 63 percent when Diaw hits the bench.

There are a couple of things going on here. Blair’s leap-frogging of Bonner suggests Popovich wants all five guys on the floor to be able to work as playmakers. His experimentation with the streaky Mills suggests the same. Bonner is not a playmaker, even after developing a semi-useful floater off the dribble last season. He was essentially a pick-and-pop and spot-up big man whose 3-point shooting spaced the floor for San Antonio’s pick-and-roll attack. But Bonner’s open looks vanished every year in the playoffs as defenses paid him greater attention and played with more urgency. Without those looks, Bonner is of limited use.

Blair can hurt you in many other ways, even if he is a limited and unreliable defender. He can both score and pass on the move in the pick-and-roll, and he’s a clever passer in general; he’s averaging nearly as many assists per minute this season as the pass-first, pass-always Diaw. He can score in the post against the right matchups and earn San Antonio extra possessions on the offensive glass.

Removing Bonner will create some growing pains in the short term. The Spurs scored almost at will when Ginobili, Bonner, and Tiago Splitter played together last season; they were actually better offensively when Parker and Duncan sat. They’ve received no such backup bump this season. And Bonner, despite his slow feet, has turned himself into a smart defender who understands schemes, limits mistakes (both fouls and gambles), and holds his own in the post against stronger guys. Blair is a more mistake-prone defender who isn’t nearly the rebounder on defense he is on offense.

But Popovich, as always, has long-term goals in mind. Chief among them: An offense that isn’t overly dependent on Ginobili, Parker, Duncan, and the pick-and-roll. The Spurs are getting more of their offense this season from cuts and off-ball screens, per Synergy Sports, in part because they’ve introduced non-pick-and-roll sets designed to produce those kinds of looks.

Duncan, for instance, has already taken eight shots coming off a pick this season after attempting just 19 such shots all of last season — including the playoffs. Most of those eight shots have been in pin-down plays like this one, with Blair acting as a facilitator:

This is a pretty standard NBA set, but not one we saw all that much of from San Antonio last season. The Spurs are using more sets — also common around the league — that feature both big men up at the elbow areas. On this one, Duncan serves as a screener at the right elbow for Stephen Jackson as Blair holds the ball above the left elbow:

Again: Standard NBA teamwork, but not something that was a foundational part of the Spurs’ pick-and-roll attack last season.

There are other changes. The Spurs are using more Utah-style “flex” sets to get Kawhi Leonard the ball on the move above the foul line, in position to attack from the mid-range — an area from which Leonard is shooting more often this season:

The leash is a bit longer on both Leonard and Danny Green. Leonard has a bit more freedom — or confidence — to create off the bounce, both in situations like the above clip and when he works as a perimeter outlet on pick-and-rolls. Green is cutting to score rather than to move around as a seldom-used decoy; he’s 10-of-14 on cuts this season after attempting 39 such shots all of last season, per Synergy.

Popovich is also tinkering with Diaw and Mills as corner spot-up threats on Ginobili pick-and-rolls. (Those links go to videos, if you’re interested). And there is just a bit more spice in the offense overall; watch below as Parker senses a great chance for an off-ball cut while Ginobili distracts the defense by faking a screen near the rim for Duncan:

And then there is the brilliant Diaw-Duncan two-man game, often based on the Spurs’ good old-fashioned pick-and-rolls. Diaw is fantastic at hitting Duncan with high-low passes as Duncan rolls to the rim and Diaw rushes up to the foul line to catch a short-range pass from Parker and finish things with a nifty dish to Duncan. They can swap roles, with Duncan swooping up above a Diaw pick-and-roll, catching the ball and either hitting Diaw with the same pass or shooting an open (and assisted!) mid-range jumper. The Spurs are even having Duncan just chill along the baseline as a spot-up threat on Diaw pick-and-rolls.

That stuff is just the refinement of last year’s offense. The other stuff represents San Antonio’s ongoing structural evolution with an eye on the title. But to go that far, the Spurs will have to find a way to survive when Duncan sits. That might come via trade, or from Popovich finding a long-term solution with one of the non-Duncan pairings currently getting minutes — Blair/Diaw, Blair/Splitter, or Splitter/Diaw. The Spurs are also well-equipped to go small, with Leonard or Stephen Jackson sliding to power forward. The results with non-Duncan big combos have been uneven, both this season and last. But the defense has consistently slipped, and the Spurs are rebounding just 68.8 percent of opponent misses with Duncan on the bench — a mark that would rank 29th overall.

The Spurs have five months to find a fix, and they’re looking for one.