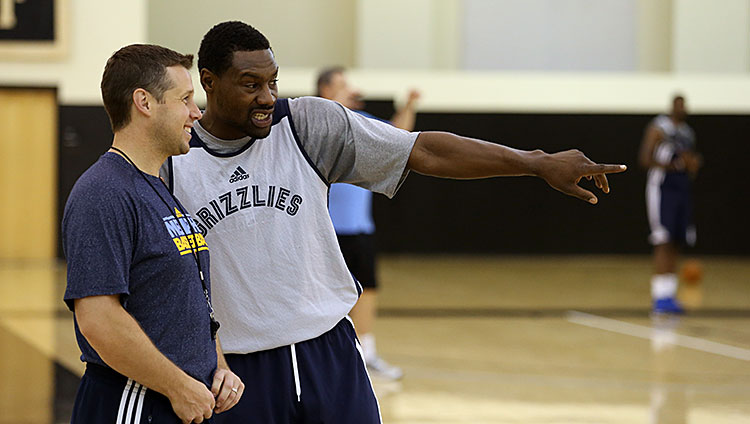 With all the Kevin Love rumors and conspiracy theorizing about Cleveland and the lottery (theory: Dion Waiters is a Mason), you may have missed some of the news coming out of Memphis. Basically, the inmates are running the Grindhouse. Zach Lowe touched on it in his front-office piece, but we’ll give you a quick primer.

Memphis won 50 games this season. They might have won a lot more had Marc Gasol been healthy for the whole campaign. They were an errant Zach Randolph punch away from beating the Thunder in the first round of the playoffs. The feeling around the team, from afar, seemed good: Pau Gasol might come to play with his brother; Mike Conley had made the leap; they had a solid front office in place and a good young coach in Dave Joerger.

Cue sound of needle scratching a record. This week, CEO Jason Levien and Assistant GM Stu Lash were fired by majority owner Robert Pera. The team’s in-house lawyer, David Mincberg, loomed in the background, and Chris Wallace, who famously sent Pau to the Lakers all those years ago, retained his spot as GM.

Things got even crazier when it was reported that Joerger asked for, and received permission to interview for, the open Timberwolves coaching position. As of this moment, it looks like he’s going to be the next coach in Minny.

Marc Stein and Zach Lowe and Chris Herrington have been doing a great job of keeping people informed on the mess in Memphis. But, man, if you aren’t listening to “The Chris Vernon Show,” on 92.9 ESPN in Memphis (disclosure: “The Chris Vernon Show” and Grantland are both part of the ESPN mother ship), you are getting only half of the glory of this whole saga.

How else would you know that Tony Allen found out about the front-office shakeup via “Google searches,” or that Pera challenged Allen to a game of one-on-one a while back? And that Joerger allegedly threw himself in front of that tragicomedy in the making? “Tony Allen tears ACL in one-on-one duel with Pera” is not a Memphis Commercial-Appeal headline anyone wants to read.

Did you know that Pera apparently went into the locker room early in the season and told various players that they would be getting playing time, without consulting with Joerger? Or that someone saw Chris Wallace buying a couple of suits earlier in the week? Sartorial power move! Do you know that despite all this madness, and the perception that Pera is kind of a loose cannon, Tony Allen is still #TeamPera? And do you know that Tony likes to sing Future before he’s interviewed on the radio?

Probably not! Not unless you have listened to “The Chris Vernon Show” these past two days. Rumors, innuendo, preaching, interviews, all delivered by Vernon, who is at once steering into the crash (he must know this craziness makes for great radio) and trying to be a voice of reason — just check out how he destroys Wallace in the below clip.

And do yourself a favor: Take 20 minutes and experience the Tony Allen … experience.

And now I will leave with this Vine of Tony Allen rolling up to the 92.9 studio for his interview: