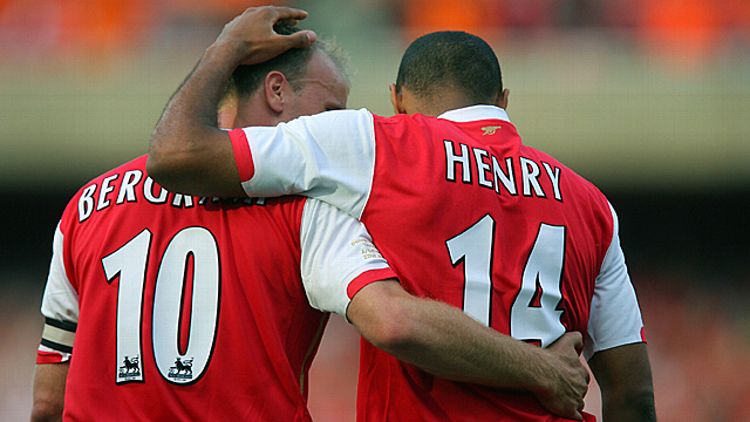 I spent the weekend in the most pleasant way an Arsenal fan can spend a weekend that falls within the summer transfer window: perusing YouTube for a contact high off the fumes of past glories. The complete Invincibles season. The wizardry of Dennis Bergkamp. Legends of the Premier League: Thierry Henry. Cesc Fábregas “Pass Master” compilations. Michael Thomas’s stoppage-time goal-into-breakdance-windmill/caterpillar-celebration as Arsenal win the league over Liverpool at Anfield on the final day — the final seconds! — of the 1988-89 season. When your threadbare team is on the eighth year of a silverware drought, most recently snuck into fourth place with all the confidence of a cheating husband coming home after a tryst, and has put its best transfer hopes in the rumor of a $78 million dollar deal for a racist and two-time cannibal, nostalgia is as good as it gets. On the cusp of a new season, Arsenal have made one player acquisition, the free transfer of 20-year-old, often-injured French international Yaya Sanogo. It’s a move so stereotypical of Arsenal manager Arsene Wenger that it’s akin to walking into a doughnut shop and seeing a cop stuffing his face with crullers.

While haunting YouTube, I came across a video chronicling the financing and building of the Emirates Stadium. I was aware of the broad outlines of this story, and the impact the construction had on the club’s transfer budget in the years since 2002, but something about seeing this video crystallized what an achievement the Emirates actually was. Privately financed through strategic debt, bond sales, and timely corporate partnerships, this was a highly choreographed dance of steel and concrete, requiring extensive planning, rigorous loyalty to scheduled benchmarks, and luck.

The luck part of the equation would be needed right away. Getting fans to support a move would be key, which meant keeping the team in the same North London neighborhood as their beloved and historic Highbury Stadium. The potential site would need to be big enough to accommodate the stadium and team corporate buildings, and be close enough to public transport to allow fans easy access on game day. They found a location, about 100 yards away from Highbury: a recycling plant and industrial buildings.

To begin the project, Arsenal would need to secure funding and obtain government clearance to buy the land; relocate the recycling plant and industrial buildings at cost to the team; begin construction while keeping the recycling plant operational until a new location for it could be found and new buildings constructed; build a pair of massive footbridges to link the stadium to the railway line on the eastern border of the site; and time the construction so that certain prefabricated pieces — like those footbridges — could be assembled inside the footprint of the stadium then moved into their positions while the stadium stands were erected around them.

If this stadium were being built in the U.S., it would most likely be publicly funded by tax dollars. Just look at the saga of Brooklyn’s Barclays Center to see the difficulties — economically and politically — involved in constructing stadiums in dense urban environments.

Arsenal built the Emirates — the third-largest stadium in England — without displacing private homeowners, without dipping into the pockets of the citizenry, without the financial muscle of oligarchical billionaires or sovereign petro-states backing their play. When groundbreaking began in February 2004, Arsenal were coming off an F.A. Cup–winning season in 2002-03 and would finish the 2003-04 season as champions without losing a single game, the first time a team had gone unbeaten in a season since 1889. The club decided, at the peak of their success, to take on enormous debts to build a stadium, and then actually pulled it off, all while staying competitive in the league and Europe. It is an incredible achievement. That was my first thought after watching the documentary.

My next thought was, OK, but why should I care?

No, really, but why? Isn’t all of that historical detail simply a “See, what happened was … ” to the question of “Where’s the trophy?” I mean, what are sports for? There are many ways a person can interact with their teams: as a purely intellectual exercise, as a medium for bonding with other people, as a vehicle for civic pride, as an excuse to get drunk on a Saturday afternoon. Sports can be all of these things. At the very root of it, though, it’s a frivolity; an entertainment. Sadly, nothing kills an entertaining vibe like pouring over charts and graphs of debt-over-time, cash balances, pre-tax profits/losses, profits-minus-player sales, cash flow, wages, wages-versus-turnover, Champions League fund distributions, and Premier League fund distributions — all in a kabbalah-like quest to penetrate the mind of Wenger, in an attempt to understand why this club simply cannot, will not, spend money on players. This is what it means to be an Arsenal fan.

Arsene recently referred to Real Madrid’s rumored $134 million bid for Tottenham Hotspur’s Gareth Bale as “a joke,” adding that he felt that world football has gone crazy. It’s all well and good to decry the current climate as too hot or too cold or too wet or too windy, but you have to at least dress for the weather.

There’s an Arsenal fan song, sung when the team plays Chelsea, that says “Chelsea, Chelsea, money can’t buy history.” The accuracy of that statement is arguable, but it certainly can buy you a present and a future. Arsenal do have a fine history, though. Here, let me show you some YouTube videos.