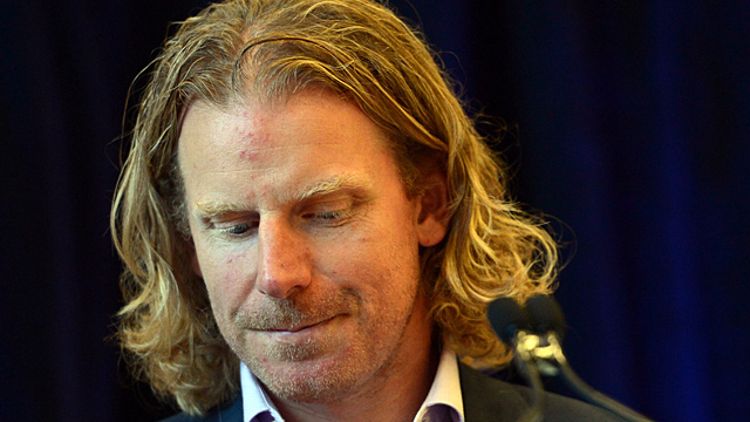 It was meant to be a chance for Alfredsson to talk about his decision and some of the bad feelings created in its wake, and it was. It was also meant to be the end of a bittersweet offseason story. If the immediate reactions to the event are any indication, that part may not work out so well.

Here are eight things you need to know about Thursday’s press conference and its fallout.

Nobody really expected this press conference to be newsworthy

Oh, it was important in a “let the departing hero say his good-byes and write the final chapter” sort of way. But Thursday’s media event had all the appearances of something manufactured specifically to avoid any hint of animosity. It took place at a mental hospital that Alfredsson had worked with during his years in Ottawa. Before speaking, he signed autographs for a long line of fans. The room was packed with hospital employees and their families, and they greeted Alfredsson’s entrance with applause and cheers.

It felt like an almost perfectly orchestrated feel-good farewell. And then Alfredsson started talking.

The NHL has made it clear that adding additional low-cost years to a deal to lower the cap hit is a major no-no if it’s accompanied by a wink/nod agreement that the player will retire before those years kick in. Alfredsson’s most recent deal initially paid him $7 million, but just $1 million for last season.

At his press conference, Alfredsson said that “each side fully expected I would retire and not play the 2012-13 season.” Senators GM Bryan Murray told the Ottawa Sun that “both of us talked and he certainly didn’t anticipate playing.”

Actually, there are a few factors working in favor of the defense here. For one, Alfredsson didn’t retire when he said he was supposed to, so at worst, everyone is guilty of only attempted circumvention, not the real deal. And there’s a significant difference between “expected” or “anticipated,” and having an actual formal agreement in place.

Still, if you’re a New Jersey Devils fans whose team is going to lose its first-round pick this year as punishment for an Ilya Kovalchuk contract that was similar in concept if not in scale, you may be asking why the league is so eager to close the books on this one.

Alfredsson did take a handful of media questions during the event (though that part was cut off after only a few minutes with several hands still in the air). But his comment about his last contract’s contentious final year came as part of his prepared opening remarks. He knew what he was doing.

The question is whether he meant it as a “what the hell” dose of honesty, or a thinly veiled parting shot at Senators management.

This all came down to money

This was about money. Alfredsson had taken a steep discount on the last year of his deal, and he wanted the Senators to pay it back. In a post on the Senators website, Murray said that Alfredsson wanted $7 million on a one-year deal, or $12 million over two. The Senators offered him one year at $4.5 million.

Could the Senators have afforded their captain’s demands? Under the salary cap, absolutely. Even after the trade that landed them Ryan, they currently sit just 28th in the league in cap hit.

But under the internal budget that owner Eugene Melnyk has recently gone public with, maybe not. (The question of how a team in an enthusiastic Canadian market could be struggling to stay in the black remains unresolved.)

Alfredsson wanted to get paid. The Red Wings could afford to pay him more than Ottawa said it could. It may really be that simple.

Of course, that reality doesn’t do anyone much good when it comes to what’s now shaping up to be a PR battle. Speaking of which …

The Senators feel like they’re in the right. In their version of events, they have an internal budget, they made their captain what they felt was a reasonable offer, and then they got stonewalled before finding out he was making the choice to abandon ship. And maybe they’re right.

But this is a PR fight they can’t win. Daniel Alfredsson was the face of the franchise for almost two decades, and the majority of Ottawa fans are going to take his side. Those fans will be angry at the organization. And they’re the same fans you still need to sell tickets to.

The best course of action here is for the Senators to grit their teeth, take a knee, and let this one go.

The Senators are not staying quiet here

Within an hour of Alfredsson’s comments, GM Bryan Murray had already fired back, first in an interview with the Sun and then on the team’s website.

That was somewhat odd, since Alfredsson didn’t direct any particular ire Murray’s way. While Melnyk’s name never came up during his remarks, Alfredsson seemed to make a point of emphasizing his respect for Murray.

So it was odd to see Murray come out swinging so soon afterward. But while the strategy may have been ill-advised, it did at least give us an all-time great Murray quote: “I’m 70 years old, you think I care what happens?” Preach, Bryan.

We can only assume we’ll hear from Melnyk, too, at some point. If past history is any indication, you may want to buckle up.

Ottawa may still be a better team because of all this

Alfredsson might be the most beloved player in franchise history, but he’s 40 years old. If it came down to him or Bobby Ryan, well, the latter is the better player right now and it’s not close. You could even argue that Clarke MacArthur, a Maple Leafs castoff whom the Senators picked up at a relative discount after Alfredsson signed with Detroit, could come close to replacing their former captain’s production on his own.

Ottawa is already a trendy pick as a sneaky Cup contender next year. Mix in a solid dose of that old “nobody believes in us” mojo, and who knows where this team could wind up.

Let’s just hope that wherever the Senators’ road takes them, it leads through a first-round playoff matchup with the Red Wings. It needs to happen. At this point, that’s probably the only thing fans on all sides of this issue could agree on.

Packaged Plays and the Newest Form of Option Football