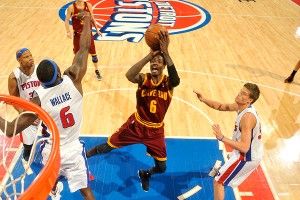 When you go to the NBA’s YouTube page and click on Tuesday’s Top 10 Plays the guy who does the voice-over says, “After mining through 240 minutes of hoops action, our editorial geniuses at NBA.com have decreed that YES we are going with the full top 10.”

Just so we’re clear, THE NBA ITSELF is equating watching Tuesday night’s NBA games with DIGGING IN THE EARTH FOR MINERALS. They actually had some kind of meeting to determine whether there were 10 plays worthy of highlighting. The no. 10 play is something that happened in the Pacers-Sixers game after the whistle blew and the no. 9 is O.J. Mayo saving a ball from going out of bounds. Crack open the smelling salts and call me Hasheem. We are truly living in the age of Tankonia.

On Tuesday, Jay Kang outlined (and mostly celebrated) the various ways a handful of NBA teams are kicking up their feet, playing their scrubs, and throwing up their E-Z Passes down the homestretch of the NBA regular-season turnpike. At one point on Tuesday evening, Cleveland was losing to Detroit, 100-50. Dark times, people.

You know what they say about dark times (and by “they” I mean the dude who wrote Gladiator), right? A hero will rise. And in the time of Tankonia, many heroes will rise. They will get abnormal amounts of playing time, put up obscene stat lines, dream of inflated contracts and becoming the centerpiece of party invitations.

Throughout the rest of the NBA regular season, we will award someone the title “Lord of Tankonia.” He will wear the crown until someone takes it from him. He will reap all the benefits of being a Lord. We just haven’t decided what those benefits are yet. It will probably involve a Buffalo Wild Wings gift certificate and our unending gratitude.

Wednesday’s Lord of Tankonia crown goes to Cleveland’s Manny Harris. Who is Manny Harris? The Detroit native and former Michigan Wolverine proved that you can go home again, but if you do so as a member of the Cavs, you will lose by 39 points. But Tankonia is not about results. Tankonia is about dreams. And last night Manny Harris’s dreams came true, as he dropped 18 in 24 minutes.

By the way, I would happily show you footage of Harris’s performance, but the only available highlights of the Pistons-Cavs game are Pistons buckets. Never let it be said that highlight editors don’t have a sense of humor.

This is the most important thing to happen to Manny Harris since he got freezer burn while wearing wet socks in a cooling chamber at Nike’s “facilities” in Oregon. I don’t even know. Hold your head high, Manny. For one shining moment, you are not the dude with freezer burn. You are royalty.