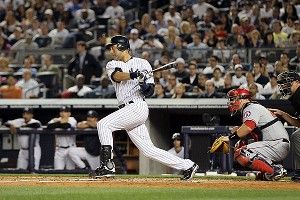 The first week of the season is always exciting. Except when you drop three in Tampa and then find yourself in Baltimore. Baltimore, right? Nice stadium, but there’s a reason they set The Wire here. The Wire guy didn’t just throw a dart at a map and say, “That’s where I’ll set my story about the systemic failure of an American city.” If he did that, Omar (how cool is he, you know? Indeed!) could’ve been robbing dealers in San Antonio. Bigger dart target, a lot closer to the middle, only a crazy person would try to hit a tiny dot in the Mid-Atlantic region. Anyway.

It’s probably just a come-down from spring training, but we’ve racked up three minus-wins in the first five games. I never say the word “lose,” it conditions you to accept failure. There is winning and there is probably some other state of non-win-being I have yet to experience. Like what’s happened in Baltimore ever since the Curse of the Jeff-bino in ’96. But I fully expect us to rip off a 10-game winning streak at any moment. Just watch.

Oh yeah, tonight’s game. I homered to lead off, right center, where the fat guy sells his barbecue. Can’t remember where I heard this, but someone told me Peter Angelos is so cheap he demands Boog’s BBQ is half that pink slime stuff, half shelter kittens. All I’m saying is I’m not eating there. At Yankee Stadium you can eat illegal whale meat if you know which stand to go to on the field level. (Steinbrenner Whale Meat and Endangered Delicacies, right off the concourse. First-rate all the way.)

Another W in extras. Grandy and Swish went yard. But rough start, CC wasn’t sharp, kind of came apart in the fifth. As Captain, I make an executive decision that we need to re-fatten-up Sabathia immediately. Usually he’ll regain the weight he sweats off in spring training as the season wears on. But after the game, we have Swish dress as Cap’n Crunch and escort CC straight to the trainer’s room, where the clubbies fill the whirlpool with half-and-half and sugary cereal. It took him two hours, and a couple of the guys had to stay late to make sure he didn’t cheat-vomit, but he finally ate the spa dry. Yeah, it’s a long season, but we can’t risk him staying under 300 pounds until the All-Star break. April games count, too.

So even though CC didn’t get it done today, I choose to look on the bright side: We’re getting great looks at the bullpen guys, whoever they are this year. I refuse to learn the new ones until June. They’re like half-players. D-Rob loves it when I call him that and make him share a locker with Boonie. He likes it a little less when he catches Boonie “accidentally” smelling his dirty sanitary socks. Lefties, man.

There’s nothing worse than when you have a day off after an early W in an inevitable 14-game streak. Real momentum killer. But at least we’re home now after a quick flight back to NY. I spend the day hanging out at my apartment, watching some highlights, going through e-mails. There’s a week-old “Minka Kelly dating” Google Alert in there with some story about Wilmer Valderrama. I text her right away. “Fez??????” She hits me right back. “U mad?” Me: “Use protection LOL.” I mean, she can date who she wants, but it’s like if Brad Pitt cut Angelina Jolie loose and a week later she’s hot-tubbing with The Situation. Day ruined.

I tell myself I don’t care, but then I spend most of the night updating the balls in my gift baskets. “Please don’t bang Fez next. —DJ2”

The Angels are in town. It’s our first look at Pujols as a player in the AL. I see him before the game and razz him a little, I know he’s off to a slow start. Congratulate him on finally getting called up to the majors, ask him to sign the real birth certificate I have showing he’s 48, force him to make small talk with A-Rod, all that fun stuff.

Speaking of Alex, he finally went deep. It was KILLING him that I’d out-homered him so far. I guess now I have to take down the giant “0” I hung in his locker, but I’m going to wait till tomorrow. Yeah, he’s fragile and as Captain I shouldn’t be messing with him like that, but whatever. If that weird German horse-surgery Kobe talked him into getting was actually working, he’d have 10 dingers by now. You don’t see me using illegal Nazi science to get an edge.

Streak’s at four. I know eventually we’ll not-win again, but this feels like it’s going to end next June on a blown call in Cleveland.

I’m starting to worry a little bit about Phil Hughes. Is he ever going to figure it out? How many chances are we going to give him? You try and be supportive, but support’s kind of a trial-and-error thing. After his first start, it was all, “Hey, man, you’ll get them next time,” then a pat on the ass with the glove. After this one, it was, “Hey, man, you’ll get them next time,” but then I had Swish take a dump in a paper bag and leave it on his recliner in the clubhouse with a note. “Next time, no bag. —DJ2.” You have to play mix-and-match with these motivational techniques until something clicks.

A big W, 11-5, on Jackie Robinson Day. Will there be a Derek Jeter Day in the future? I won’t speculate about that. That’s for the people who give days to certain historically significant players to decide. How many shortstops have five rings and really should have seven rings? Not many. The guys on the Committee for Special Player Days probably know the answer to that one, that’s their job. My job is to help the team win.

Raul Ibanez went yard. When he got to the dugout I was all, “When did we trade for you?” And he goes, “I signed as a free agent before spring training, dude. We had dinner together in Tampa like five times.” Cut me some slack, bro, I’ve got other things on my mind besides which platoon DH ordered the filet mignon and three bottles of wine when I was picking up the tab. And isn’t he 65? He’s the one with the memory issues, probably.

Look. If there’s one guy in this world we need to beat EVERY SINGLE TIME it’s Carl Pavano. There are players who “can’t handle New York” and then there are players who “sign huge contracts they didn’t earn, make 10 starts in three years, and fail to maintain a relationship with Alyssa Milano.” Yeah, that last part was kind of a personal low blow, but that’s what happens when the Big Apple chews you up and poops you out in the Midwest. Did she leave him for Fez? I wouldn’t count out the possibility.

Freddy Garcia was just awful. We can’t not-win to Pavano. Freddy and Phil are in some kind of weird “Who wants it least?” competition with Pineda and Andy coming back soon. I literally asked them, “Who wants it least?,” in the locker room after the game, half-joking but also not. As the captain, you can sort of play it both ways. Both of them dived under the buffet table. But then Phil kind of waved when I peeked under there, so maybe he’s got the edge at the moment. Freddy just kind of sweated profusely. His fastball topped out around 47 today. I don’t want to say he’s getting by on junk, but he tried to bring a sack full of rusty car parts to the mound. Justin Morneau hit an old distributor cap into the bleachers. You get what I’m saying. Carl Pavano beat us, I’m a little fired up right now. If I weren’t cracking up every half hour thinking about how Bobby Valentine called Youk lazy and fat, I’d be even more bent out of shape about it.

CC started slow, but he gutted it out and we got the W. I don’t want to take all the credit, it was a team effort, but we already got him to put on 18 pounds in under a week. Boonie even offered to live at the big man’s house and feed him a Double Whopper by hand whenever CC rang a dinner bell, but only if he could wear one of those creepy Burger King heads and Sabathia’s uniform pants. Not sure about that guy.

During the game, a guy ran out on the field, but security tackled him before he could cause any real trouble. Turned out it was Frankie Cervelli. He’s really had a hard time since they sent him back to the minors. Sad.