Lords of Tankonia: Jerome Dyson’s Night at the Stripe 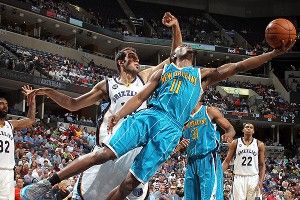 I feel like I would get along with New Orleans coach Monty Williams. For one thing, he had a sense of humor when he got pegged with a peanut during a Hornets game against the Los Angeles Clippers at Staples Center in March. Another reason? I once saw him eating at Lawry’s Carvery, which is my preferred lunch spot when I really don’t have enough emotional energy to think about where to get lunch. Monty just seems like the kind of dude who does not expend unnecessary emotional energy.

However, the main reason I feel like Monty and I are on the same page is this: Monty Williams seems to truly understand Tankonia.

Jerome Dyson is from Maryland, went to UConn, got briefly suspended from the Huskies for getting caught with weed and alcohol on his person, got his person back onto the team, blew up his knee, came back and put up 17 a game, entered the 2010 NBA draft and didn’t get picked, played a little for the Thunder in preseason, got cut, played for the Thunder’s D-League team in Tulsa, and, one way or another, found himself in New Orleans on Wednesday playing for the Hornets against the Grizzlies.

Like Manny Harris before him, Dyson took advantage of his opportunity, coming off the bench to score 24 points in 26 minutes. He did so by flushing a frankly Kobe-esque 14 of 16 free throws. Memphis had a season-making victory, clinching a trip to the postseason, but Dyson had a career-making night. Or at least a night he’ll remember for the rest of his career.

“Coach (Monty Williams) just told me to attack, and that’s what I was able to do,” Dyson said after the game. I might just have a general affection for New Orleans as a city, but there’s something about the way Williams is going about overseeing the Hornets’ nose-dive that I find bizarrely dignified. He’s just realistic about where he is and what’s going on. And while he’s there, he’s going to give a couple of never-have-beens a chance to become could-bes.