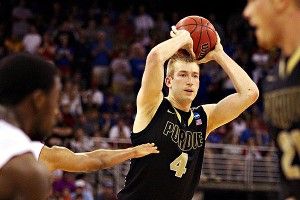 After Wichita State lost, and Belmont lost, and Missouri lost, and Murray State lost, and SLU lost, and Kendall Marshall broke his wrist or whatever, I decided to back Purdue and hop on the Robbie Hummel bandwagon. There was still plenty of room, after all! And it’s hard not to like Hummel, who twice tore his ACL and twice made a comeback.

Here’s what Grantland’s Mark Titus wrote about Hummel at the start of the season:

At the end of February during Hummel’s junior season two years ago, Purdue was 23-3, ranked third in the country, stood alone atop the Big Ten standings, and appeared to be a lock for a no. 1 seed in the NCAA tournament. But then Hummel, who was undoubtedly Purdue’s most important player, tore his ACL toward the end of a one-point win at Minnesota and had to sit out the remainder of the year, which all but erased any hope Purdue had at a national championship.

In their first game after the injury, Purdue lost at home by nine to the same Michigan State team they had beaten by 12 less than three weeks earlier, and in doing so, shared their Big Ten title with the Spartans and an Ohio State team that I happened to be a senior on, instead of winning the thing outright like they probably deserved to. They followed that loss up with a few cupcake wins, but lost by 27 to Minnesota in the Big Ten Tournament semifinals (if you’re keeping score at home, Hummel’s injury was apparently worth 21 points against Michigan State and 28 points against Minnesota). And while the Boilermakers somehow managed to salvage the season and make a surprising run to the Sweet 16, it was impossible to not think about what might have been had Hummel stayed healthy.

READ MORE HERE.
Doesn’t that sound like someone you want to cheer for? Well too bad, because these jokers beat Purdue on Sunday and spoiled all the fun. (Hummel had 26 points and nine boards in the loss. He cried in the post-game presser. Man. That’s pretty much the worst, right?)

So sorry, Internet. I don’t know what to tell you. Mostly because I’m running out of things to support in this tournament. Guess we should all just give up and cheer for this guy now.