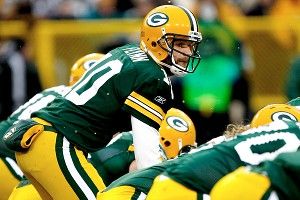 As the Dolphins continue to flounder in their search for a new quarterback this offseason and times seem to get more desperate with each day, they might do well to heed WOPR’s advice from WarGames. Their only winning move might be not to play at all.

The weekend did not go very well for Miami, with Peyton Manning reportedly removing the organization from his list of possible landing spots before Matt Flynn signed a three-year deal with the Seahawks on Sunday. The Dolphins responded to that news by bringing in 49ers starter Alex Smith for contract talks, just as Smith’s former employers were revealed to be a mystery team in the Manning sweepstakes. Oh, and while the Dolphins could theoretically have gone for Texas A&M quarterback Ryan Tannehill with the eighth overall pick in this year’s draft, Peter King of Sports Illustrated is reporting that there is a good chance that Tannehill won’t last to that spot, with the Browns considering a move for him at no. 4.

At this point, the Dolphins need to take a step backward and view the bigger picture. If Manning is truly off the table, is there a player available in the market who would represent a real upgrade on incumbent Matt Moore? Tannehill’s considered a serious step down from the Andrew Luck-Robert Griffin III one-two punch by scouts, and Alex Smith, well …

Those are each quarterback’s rate statistics from 2011. The biggest difference between the relative performances of Moore and Smith was Smith’s incredibly low interception rate. That 1.1 percent figure is the fifth-lowest rate in NFL history for a quarterback, and it’s the product of an incredibly conservative offensive scheme mixed with a healthy amount of luck. Smith’s interception rate will regress toward the mean in 2012, just as the likes of Tom Brady and Josh Freeman saw their INT rates rise this past season. As for Smith’s playoff heroics, he was playing with a fantastic defense and was atrocious in the NFC championship game; Moore, for what it’s worth, took over as the starter for an 0-4 team and went 6-6 the rest of the way.

Moore might be the better quarterback in a vacuum, and it’s patently obvious that Moore at $3.5 million for one year is better than Smith at something like $30 million for three. Dolphins fans might be disappointed if the team doesn’t end up with some sort of new blood at quarterback, but they’re also likely to be disappointed if the Fins pay an exorbitant sum for Smith and actually suit him up for three years. At this point, barring a change of heart from Manning, the Dolphins are better off staying put with Moore as their starter. They can bring in someone like David Garrard or Matt Leinart as a low-cost flyer to compete with Moore in camp before reevaluating the situation in 2012, when the first round of the draft will have the likes of Matt Barkley and Landry Jones available. Until then, they would be naive to pay Smith or deal multiple picks for Tannehill in the hopes that they can provide a serious upgrade on what the Dolphins currently have.

Seattle’s deal with Flynn represents sound business for both sides. The three-year, $19 million contract guarantees Flynn $10 million and will likely make him between $13 million and $16 million over the first two seasons. At that point, the Seahawks should have a much better idea of what Flynn is and can either negotiate a new deal or let him go without having committed all that significant of a deal.

Of course, at this point, nobody knows what Flynn is, which is why the market for him wasn’t quite as robust as it might have seemed. We made some arguments in his favor as part of our “free agent book” on him, but it’s close to impossible to find out everything you need to know about a quarterback in 132 pass attempts. You’ll hear quotes from anonymous personnel guys and scouts about how Flynn has this attribute or doesn’t have this quality, but remember that these are the same guys who passed on Flynn on draft day and let him fall to the Packers in the seventh round. They don’t know, we don’t know, the Seahawks don’t know, and Matt Flynn doesn’t know. After a few hundred passes, we’ll all know.

Feed the YAC and He Will … Fall Down?

The Patriots consummated their long-rumored interest in Brandon Lloyd this weekend by signing the veteran receiver to a three-year, $12 million deal. There’s no word on how much guaranteed money is in the deal, but even if it were the full $12 million (and it’s almost surely not), this would be a bargain. Lloyd got less money on his three-year deal than former teammate Eddie Royal got on his three-year pact with the Chargers, and Lloyd had nearly twice as many receiving yards in 2010 as Royal did in 2010 and 2011 combined. In that season, Lloyd had 1,448 receiving yards, which is nearly as many as Laurent Robinson has in his entire pro career (1,858). Robinson got $14 million guaranteed in his deal. And Lloyd’s 2011 season — 70 catches, 966 yards, five touchdowns — was a dead ringer for Pierre Garcon’s “breakout” campaign from last year, when Garcon caught 70 passes for 947 yards and six scores. Garcon might have gotten more than three times as much guaranteed money in his deal than Lloyd got in his.

We’re not criticizing those teams for choosing those receivers over this Lloyd deal, since it’s entirely likely that they didn’t have the option to give Lloyd, already 30, a similar contract. The former Illinois standout spent most of the offseason begging the Patriots to sign him, thanks to the presence of “Lloyd Whisperer” Josh McDaniels as the team’s offensive coordinator. Lloyd’s only two professional seasons of any consequence have come while playing in McDaniels-run offenses for parts of 2010 and 2011. The Patriots could have panicked at the beginning of free agency and locked Lloyd up with a bigger offer before another team convinced the mercurial wide receiver that he would be better off accepting their money instead, but they used what they knew about Lloyd’s interest in playing with the team to wait out the market and drive his price down.

Will Lloyd be the dynamic receiver that the Patriots hoped they were getting in Chad Ochocinco? It’s hard to say. For one, it’s unclear how the offense will change with McDaniels back at the helm as offensive coordinator. As you might have noticed, the tight end-heavy scheme that the Patriots ran to great success in 2010 and 2011 wasn’t entirely similar to the Erhardt-Perkins offense that McDaniels used with Lloyd as his number-one receiver in Denver and St. Louis. McDaniels will undoubtedly adapt his passing attack to his personnel in the same way that he did when Randy Moss and Wes Welker arrived in New England before the 2007 season, but Lloyd is extremely unlikely to hit his 150-target average from the past two seasons playing alongside the likes of Welker and Rob Gronkowski. Will Lloyd be quite as effective in an ancillary role if he only gets, say, 90 targets over the course of a full season? Will he get frustrated? Or will the Patriots try and alter their offense to integrate McDaniels’s star pupil and produce a less effective passing attack as a result?

The other issue to wonder about is Lloyd’s ability — or lack thereof — after the catch. The Patriots had 50.3 percent of their receiving yardage come after the catch last season, a figure topped only by the Bills, and starting wideouts Wes Welker and Deion Branch each averaged more than six YAC per catch. It would seem like making plays after the catch would be essential for a Patriots wideout, but last year, Lloyd averaged just 2.1 yards after his catches, the lowest figure in the league for a wide receiver with 50 catches or more. As the season went along, he seemed to develop this weird obsession with going to his knees or a full stretch either before or during the process of making a catch, which prevented him from even having any hope of producing YAC. It became noticeable to the point where it was a running joke with friends every time Lloyd would get thrown a pass. Then again, Lloyd had the league’s fourth-worst YAC per catch in 2010, so it could just be a trick of memory. In addition, when McDaniels used Randy Moss to great success in 2007, Moss only averaged 2.9 YAC per catch, which was the seventh-worst rate in the league. So Lloyd should be able to carve out some role in the offense, YAC be damned.

By all accounts, Eric Winston was one of the best right tackles in football last season, just as he had been in 2009 and 2010. The Texans had every reason to expect that Winston, at 28, would be able to keep up his level of play for the next several seasons, and with Winston owed just $5.5 million for 2012, Houston had every reason to keep him around. Instead, the Texans shockingly released Winston on March 12, eventually using the money saved to re-sign center Chris Myers. The Chiefs signed Winston to a four-year, $22 million deal on Saturday, and it’s one of the most interesting moves of the silly season. If Winston produces at his established level of performance, that $5.5 million-per-year figure will be well worth it and an enormous upgrade on previous starter Barry Richardson. That’s plain to see. The big question, though, is simple: Why would the Texans release a Pro Bowl-caliber lineman in the prime of his career?

The simplest reasoning is that the Texans let Winston go for financial reasons. Although Winston was only owed $5.5 million, he was in the fourth year of a five-year contract extension and might have gone to the team looking for a contract extension that the organization wasn’t interested in offering. That can occasionally be enough for a team to get rid of a player, as was the case with Leigh Bodden in Cleveland a few years back (or, to some extent, Randy Moss in New England). They also might have thought that the money allotted for Winston could be put to better use by signing Myers and/or guard Mike Brisiel, who eventually went to the Raiders. What doesn’t make sense under this scenario, though, is why the Texans didn’t try to trade Winston and acquire something of value in return. Even a conditional draft pick would have been better than releasing Winston for no return.

The more sinister argument is that the Texans knew something about Winston that the rest of the league doesn’t and wanted to get out from underneath their commitment to him quickly. That would likely be something medical that the Texans are worried about in either the short or long term. There’s no outward evidence that such an injury exists, since Winston hasn’t missed a game since his rookie season, but the Chiefs have been burned by a situation like this before. In 2005, they gave Steelers linebacker Kendrell Bell a big deal in free agency after the Steelers chose not to re-sign the 26-year-old former Pro Bowler. Bell was coming off a season where he played just three games, so the injury risk was more obvious, but the relevant point here still applies: Teams know the players on their own roster better than anybody else in football. The Steelers knew Bell’s future was short and let him wade into free agency to be picked up by a team desperate for an upgrade. The Texans seemingly just cut bait on an extremely talented offensive tackle without an obvious reason why. There’s a decent chance that the Texans just didn’t want to pay Winston and the Chiefs will be the beneficiaries of their largesse, but this one seems very suspicious. At the very least, it’s something to look out for next season.