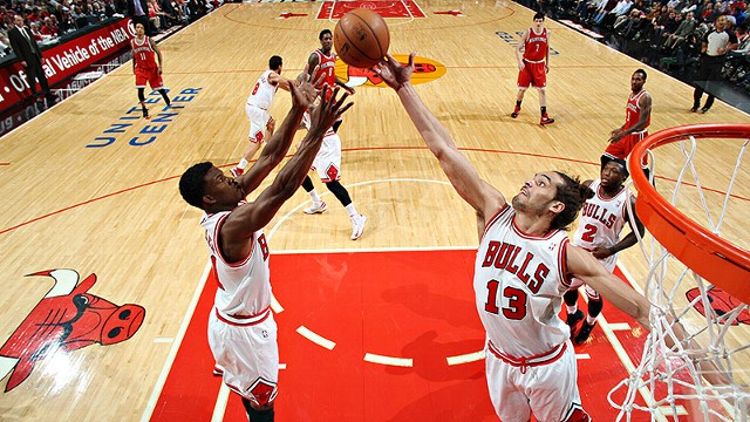 Jimmy Butler had plenty of good stretches last night in the Bulls’ 95-83 win over the Lakers, but the best came with about nine minutes left in the fourth quarter. After stealing an errant Antawn Jamison pass and throwing it down on the other end, Butler, as he seemed to be all game, was draped over Kobe Bryant outside the 3-point line. The shot clock was ticking down, and as it hit :01, Bryant flung the ball toward the rim, but hit nothing. The horn sounded, and the ball was back to the Bulls.

Bryant finished the game 7-of-22 from the field, and everyone from Steve Kerr to the rest of the Bulls locker room had the same theory why. Kobe’s 42 minutes were topped only by Butler’s 43, and for the second straight game, Butler showed he had no trouble playing the part of Luol Deng, who’s joined Derrick Rose on the list of injured Bulls.

This year was supposed to be a lost one for Chicago. With Rose’s torn ACL keeping him out until at least the All-Star break, a team ravaged in the offseason by financial constraints seemed more destined for the lottery than the conference finals. But with last night’s win, the Bulls are now 24-16, good for fifth in the East and just a game and a half back of the Knicks for the no. 2 seed. With Rose’s return no more than a few weeks away, the question has shifted from how the Bulls will tread water without him to just how good they can be with him.

Much of the argument for why Chicago could stay afloat without Rose centered on the Bulls’ record without their star last season. A handful of injuries limited Rose to just 39 games, but the Bulls still managed a 50-16 finish, good for the top seed in the East. That theory would be relevant if the rest of the roster had remained mostly intact, but that was far from the case. Chicago lost the majority of its second unit, a group that, as a whole, played more than 50 percent of the minutes given to the Bulls’ starting five. At 79 points allowed per 100 possessions, it also happened to be the best defensive unit in basketball.

When Omer Asik left for Houston (and less so, when Ronnie Brewer did not re-sign), the Bulls were forced to face life not only without their best player but also without their primary advantage. The luxury of subbing in five-man rotations (technically four; Luol Deng was the fifth man on the bench unit) was gone, and it was on Tom Thibodeau and the players left to figure out how to pick up that slack. The Bulls are no longer the league’s best defensive team, but they do still rank in the top five (in points allowed per 100 possessions), and they’ve been able to maintain that effectiveness for a couple of reasons.

One is the improved play of Joakim Noah, who deserves to be an All-Star. Noah’s obvious contributions in Rose’s absence have come at the offensive end. With the Bulls’ primary ball handler out, Noah has taken on a bigger role in creating offense for his teammates. His usage rate is a career high 17.5, and with it, his assist rate has climbed to 17.3, a ridiculous figure that just about doubles the average center. Playing further from the basket has caused a dip in both Noah’s rebounding numbers and his efficiency as a scorer, but with the number of easy baskets he’s getting his teammates, the Bulls will gladly take it.

The more important improvement, though, has been at the defensive end of the floor. Asik’s departure has meant both increased minutes (from 30.4 to 38.2) and an increased responsibility, and Noah has responded with the best defensive season of his career. Even when paired with defensive stalwart Taj Gibson, Noah has been the anchor of the Bulls’ defense in a way he’s never been before, and it’s a big part of what’s carried Chicago.

Another difference with these Bulls, as much of the basketball-watching public saw last night, is the emergence of Jimmy Butler. Butler played just 8.5 minutes per game last season, and this year, that number has jumped by more than 10. His performance in Deng’s absence has been impressive (14 points and 45.5 minutes per game), but it’s actually slightly misleading. When Rose returns, one of the ways the Bulls can get even better is with more Butler, but that increase should probably come with Deng on the floor.

Chicago’s best five-man lineup this season has been the one consisting of Kirk Hinrich, Butler, Deng, Gibson, and Noah. Much like the success of last year’s second unit, this group has been driven by its defense. In just under 48 minutes this year, the group has tallied a +/- of 25 and a defensive rating of 78. By using Butler at the 2, the Bulls have their two best wing defenders and two best interior defenders in the same lineup, and the result is a nightmare for anyone interested in scoring.

There are two main arguments against seeing more of the Butler-Deng pairing going forward. The first is that because Butler is Deng’s primary substitute, more Butler means even less time on the bench for Deng. Considering he’s already averaging about 107 minutes per game (technically, 39.8, but you get it), this isn’t really an option. The solution is probably for Butler’s minutes to come at the expense of Marco Belinelli. The sixth-year shooting guard is averaging 25 per compared to Butler’s 18, and by simply cutting into those minutes rather than increasing his time at the 3, Deng’s workload would stay the same.

The other argument actually deals with Belinelli. Chicago’s biggest issue in the past two seasons has been secondary scoring, and chipping away at Belinelli’s minutes means surrounding Rose with next to no shooting. The solution here might be that instead of a simple Butler-Belinelli swap, Rip Hamilton’s minutes decrease, as well. How these minutes should break down becomes complicated, but the point here is not — more Jimmy, and more Jimmy alongside Deng.

There are new reasons the Bulls have been able to sustain success with Rose, but there are plenty of old ones, as well. Gibson has been the type of defensive force that earned him his new four-year, $38 million contract. Carlos Boozer has picked up some of the scoring slack, especially as of late. Nate Robinson has provided the type of instant offense that John Lucas was good for a year ago. And Thibodeau has shown once again that he’s one of the best coaches in basketball.

It’s been the differences in this team, though, that have allowed it to hang on as it waits for Rose’s return. When he does return, it’s hard to say just how smooth it will be. There’s likely to be an adjustment period that includes a few bumps, but what’s clear is that what’s around him is better than anyone could’ve thought heading into the season. It might not be this year, but with Noah’s improvement and Butler’s emergence, the Bulls’ return to contention may not be too far away.

About Last Night: The Lakers Continue to Be Terrible